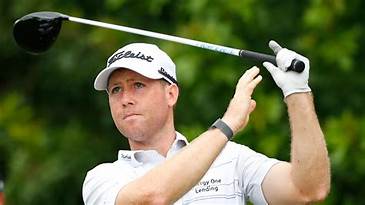 Tyler Duncan won for the first time thanks to a 12-footer at the second playoff hole.

Brendon Todd started his Sunday at Sea Island in search of a third straight win on the PGA Tour.

That dream ended early when the overnight leader made double-bogey at the par four fifth — handing control of the RSM Classic to Webb Simpson.  Most felt Simpson would cruise to victory.  After all, he was ranked No. 12 in the world, highest in the field and was the only contender with a U.S. Open title and a Players Championship on his resume.

Indeed, Simpson stayed in front until upstart Tyler Duncan birdied three of his final four holes, rolling in birdie putts from 24-feet at 15, seven feet at 17 then one from 25 feet at 18 that gave him a closing round of 65 and a 19-under par total — the number Simpson was sitting at after Webb birdied 15 and 16.  Suddenly, Simpson was grinding to finish in a tie with Duncan.

Sebastian Munoz tried his best to make it a three-man playoff but he came up a shot short at 18-under, two clear of Todd, who would finish solo fourth to cap off an incredible three-tournament run.

The final stage belonged to Simpson and Duncan, ranked 387 in the world and a guy fortunate to be in the field after losing his card last season.  A trip to the Korn-Ferry Tour finals got his card back and there he was, up against a major champion.

A pair of pars the first time down 18 send the twosome back.  Simpson’s tee shot hooked too much and he found himself with a tough sidehill lie in the rough with 190 to the hole.  His second found the greenside bunker left.  Duncan’s drive was dead-center, leaving him just 175 in and he responded with a beauty that left him just 12 feet from the hole.  Simpson had a tough bunker shot and left himself eight-feet for par.  Duncan didn’t give him that chance.

Duncan’s putt was on line the entire way and went straight to the bottom of the cup, changing the struggling golfer’s life for the next two years.

“Just so happy to be here playing,” Duncan said.  “To come out here and win, it’s unbelievable.”

Duncan said his four-iron at the 17th that set up the short birdie putt, “was one of the best four-irons I’ve ever hit.”

It was the second playoff loss in the event for Simpson and his overall playoff record is now 1-6.  But he smiled and gave credit to Duncan — “Congrats to Tyler.  He played great and I’m happy for him.”