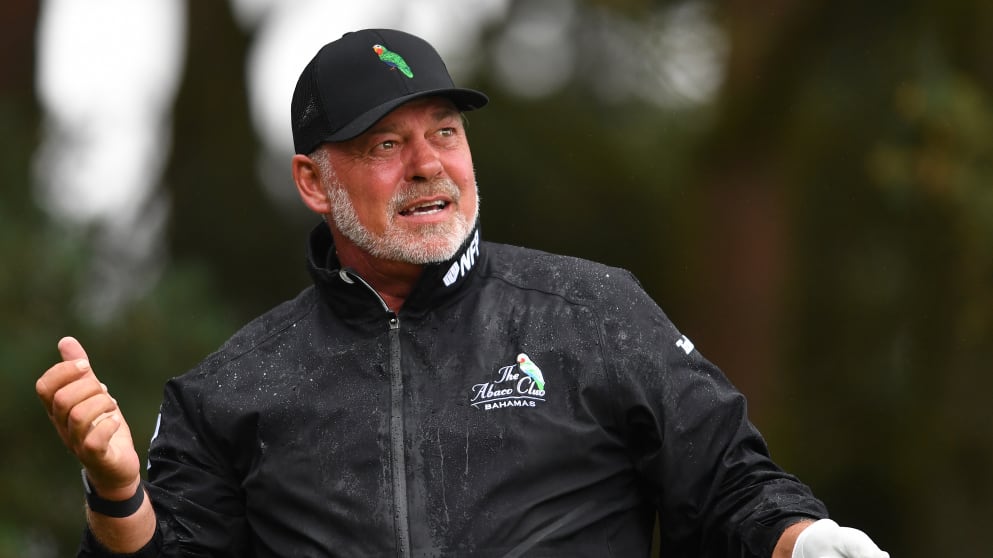 Darren Clarke's two-putt birdie at the 18th edged Paddy Harrington by a shot.

Darren Clarke had a one-shot lead through 13 holes at the Senior Open Championship Sunday when the Scottish skies opened up at Gleneagles with torrential fury.

A near two-hour rain delay gave the 2011 Open champion time to think about what he had to do to add the Senior Open to his accomplished resume.

At the time he was two in front of U.S. Senior Open champ Paddy Harrington and when play resumed, Harrington applied the pressure with a birdie-birdie finish that got him in the clubhouse with at nine-under par after a closing 67, including a back nine of six-under par 30.

Clarke arrived at the par five 18th knowing what he needed.  Clarke, who birdied the par five 18th in his previous three rounds, hit two nice shots that got him to the front of the green then two-putts later, he had the Open double.  He finished at 10-under thanks to a final round 69.

He joined Sir Bob Charles, Gary Player and Tom Watson as a winner of The Claret Jug and The Senior Open.

“I’ve made no secret of the fact that I wanted to win this more than anything,” Clarke said after his victory.  “From when I turned 50, this is the one I wanted to win, so I could set it beside the other one. It’s a pretty good feeling right now.  I feel very privileged to get my name on The Claret Jug and now to get my name on this one as well and go beside some legends of the game. I feel very humbled and very honored.

“Fulfilling your dreams is a very lucky thing and I’ve been able to do it a few times in my career.”

Clarke said he felt the same calmness that was inside him in previous big wins.   “This week, I had that calmness again. I think it comes from being accepting, knowing that I hit some poor shots now and again. I’m not going to hole that many putts or whatever. And when you’re accepting, it’s easier just to amble along and accept the outcome.”