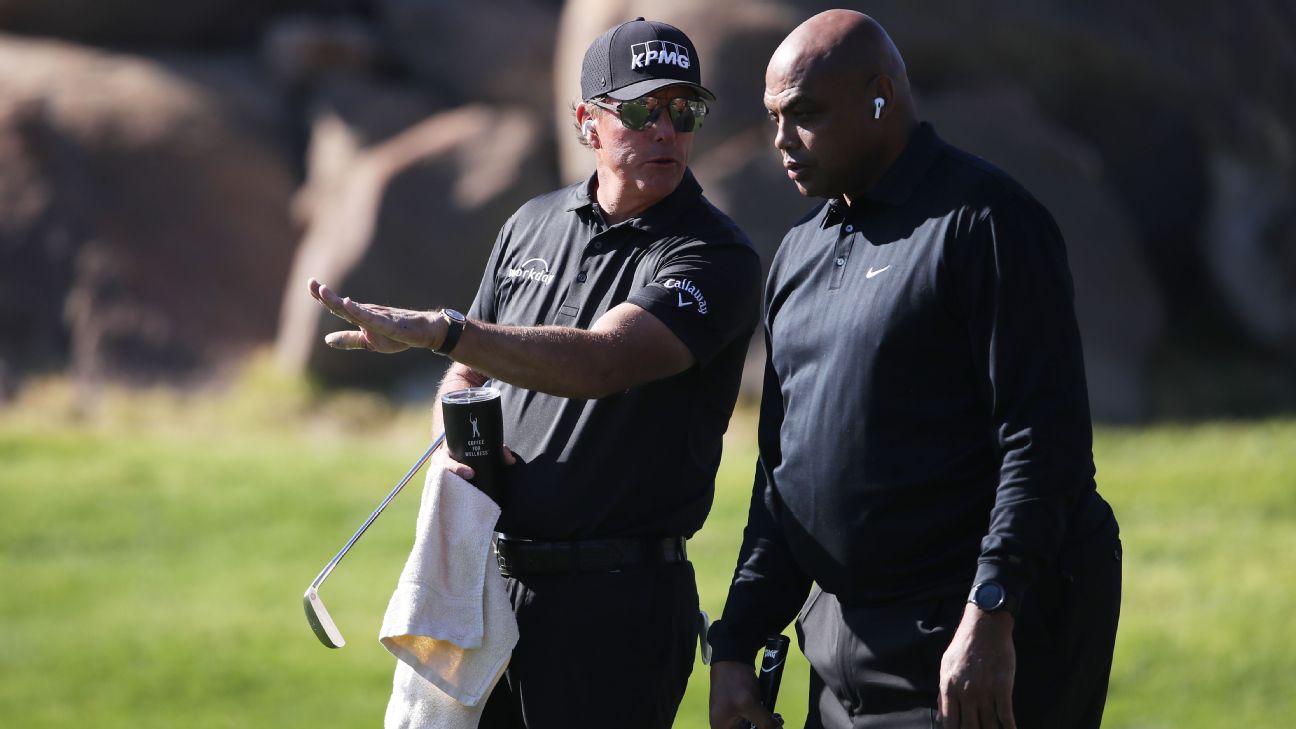 "Look Chuck, LIV is a great gig if you don't mind losing all those endorsements of yours."

If you don’t believe the LIV is out to be a totally disruptive force in the world of golf — simply look at the latest accomplishment by the 54-hole, filthy Saudi money-backed exhibition series.

Stenson had signed a contract for the captaincy.  He ignored that contract and joined the retirement community known as the LIV exhibition series — the result, the Ryder Cup Europe officials were short and to the point:

Stenson’s tenure, per Ryder Cup Europe:  “has been brought to an end with immediate effect.”

So it’s over for Stennie it lasted somewhere in the neighborhood of 120 days, give or take a few.  Basically Henrik signed a contract as the European captain and within said contract was language that he could not support or promote “other properties” and that definition includes other tours, leagues or series of competitions.

No surprise, Stennie was ripe for the picking by the citizen-beheading Saudis.  He’s 46, long past his prime, has made a shade north of $180k this year and that won’t even pay for his private jet fuel.

Stenson avoided the issue at last week’s Open Championship but now he’s in the field for the 54-hole exhibition next week.

Now on to more silly LIV business and rumors.

There was talk that the LIV was courting Charles Barkley to join its fantastic U-Tube broadcast team where he can literally be heard by thousands, rather than the millions of NBA fans who love to listen to his takes on TNT.

Dan Patrick spoke about Barkley on his ESPN radio show:

“He’s the most valuable voice in sports media,” said Patrick. “You throw in all the commercials, because he may lose those endorsements, a lot of these players who joined the LIV tour lost endorsements. Charles knows that he may lose those. So if you’re gonna go after Charles Barkley, you don’t have a TV deal and you have David Feherty, what are you gonna give Charles Barkley? And Charles says he’s going to listen to them, I believe tomorrow night and decide what he’s going to do, and he might have to leave TNT. That’s why this is a huge deal. And Charles knows that he may have to leave TNT to do this.”

There’s only one huge problem.  Charles Barkley likes to tell it like it is and that’s a no-no with the LIV.

You have to be constantly praising and selling the product.  Jerry Foltz offered this vomit-inducing declaration in the first broadcast:

Poor Jerry.  Look how money made him lie out loud.

Barkley was a voice during that Phil Mickelson/Tom Brady vs. Tiger Woods/Peyton Manning match a few years ago and Barkley made this point when things weren’t going really well for any of the four:  “This is some really crappy golf.”

And when you look at Mickelson’s 75-plus scoring average, the guys shooting in the high 70s and 80s on the LIV (and that’s a bunch of them), well, Sir Charles might be prone to point out that it is indeed “some really crappy golf.”

And at that point someone would have to remind Barkley that the Saudis are particularly fond of assassination and dismemberment.

Then there was the rumor that Hideki Matsuyama was offered north of $300 million to defect.  He may have made three times that in Japan after his Masters win.  Not sure Hideki wants to take them up on that offer.  Besides, he’s not nearly old enough.

Charles Howell III signed up and since he’s well into his 40s, he’s the Saudis kinda guy.  Good for Charlie, no one’s going to miss him on the PGA Tour.

Jason Kokrak’s on board.  No surprise, you would expect a guy with “Saudi Golf” on his shirt sleeve to go that way.  No loss there.

So the Saudi Circus goes on with Norman as the ringmaster.

There’s nothing real about it aside from the money.

And that’s all this is about — that and disrupting the world landscape.

So don’t look for Barkley to show up either, he’s not really the type of guy who wants the LIV producers telling him what he can and cannot say.

Besides, it is, as Barkley once said — really crappy golf.