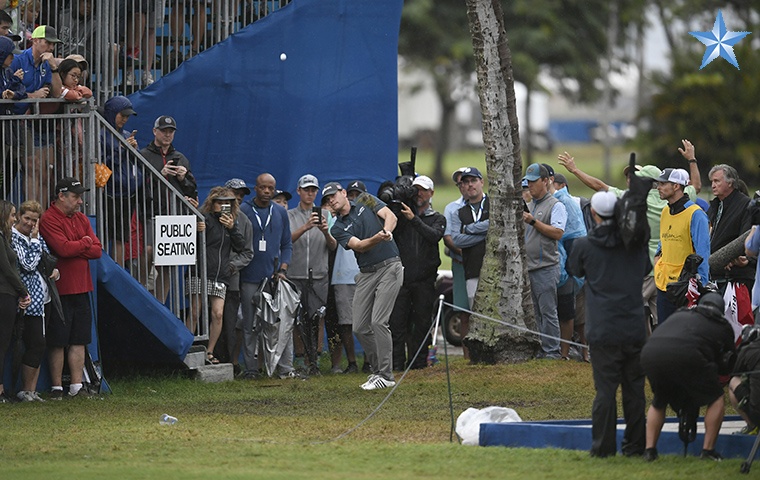 A second shot at the 72nd hole proved costly for Brendan Steele.

If the wind and rain at Kapalua wasn’t tough enough a week ago, the Hawaiian Islands unleashed yet another week of weather that made the Chamber Of Commerce cringe.

Waialae Country Club turned into Wet-lie Country Club at the Sony Open, especially for Sunday’s final round where it got so bad they had to spend countless minutes trying to squeegee water off the 18th green.

Brendan Steele built a three-shot lead going into the final 18 holes thanks to a splendid birdie-birdie-birdie finish on Saturday that got him to 12-under par and in control of the tournament.   He was the only guy in double figures, a full three shots in front of Aussie Cameron Smith and four clear of Kevin Kisner.

Of course there was more wind on Sunday.  There were strong winds all week, enough to send the big names packing — defending champion Matt Kuchar, Tournament of Champions winner Justin Thomas and bad-boy Patrick Reed all were sent home after Friday.  None of them sounded heart-broken about it save Thomas, who lamented that on Friday he “played like crap.”  Truth be known, by Sunday, a lot of guys left in the field played like crap with the exception of Graeme McDowell and Lanto Griffin, who sloshed their way through the rain and put up 64s on Sunday to nab high finishes — just not high enough.

The one good thing that happened was that the winds tamed down a bunch over the final nine holes but the wet fairways once again left the field in the old Lift-Clean-And-Place mode or as Ken Venturi once said, “Lift-Clean-And-Cheat.”  It was so wet that they needed to, Titleists covered in mud,  otherwise.

Which brings us back to the final group.

Steele was still in a good place standing on the 17th hole, a par three.  He was 12-under, even par for his round, and two clear of Smith, who had been on his heels all afternoon.  Then things started to sink, so to speak, for Steele.  He pulled his tee shot long left then chipped to inside nine feet but missed his par putt.  He fell back to one-over for the round and just a single shot ahead of Smith with the par five 18th waiting.

And do we mean waiting.

When the Steele-Smith-Kisner group reached the tee, there were two other groups on the hole — one on the green, one in the fairway waiting to hit second shots at the reachable par five.

Then there was the squeegee guy.  Moving water was taking what seemed like forever.  You know it seemed like forever for Steele.  He had to wait nearly 15 minutes to hit his tee shot but he managed a really good one, just past Smith, who cranked out a really good one.  Then things got even testier for Steele.  He had to wait another 15 minutes to hit his second.  He hadn’t hit a really bad shot all day, ball-striking is his strong suit.  But for some reason, had to be the unearthly waiting time, he duck-hooked his second, over the hospitality tents, some 50 yards left of the green.

Smith hit a nice one, nearly stayed up but left him with a really long bunker shot.  He’d probably need to get up-and-down for birdie to have a shot.

After spending too much time with tour official Mark Russell, Steele found relief and a clear shot at the hole,  albeit about 40-some yards away, over bunkers with that sloppy wet green to figure out.

Steele’s shot came up well short and Smith took advantage of the situation and threw his bunker shot to just inside nine feet.  Steele two-putted for par and Smith buried his birdie putt — give him credit for that.  With 20 minutes to sunset, for the second straight week, it was playoff time.  But only light enough for one hole, the short par four 10th.

Smith’s drive in overtime sailed right and settled near the trees, Steele’s three-wood was perfect — in another wet fairway.  From 110 out, Smith hit a nifty approach that stopped just inside nine feet while Steele made a fateful mistake from 87 out.  He flew the green.  His chip wasn’t that difficult but under the circumstances, he his a nervous pitch, too thin and he was looking at 15 feet for par.  He missed and Smith cautiously two-putted for his first individual win on the PGA Tour.

Glory for Smith, heartbreak for Steele.  Steele knew it was his to win but admitted it got away:

“Kind of everything that could go wrong went wrong today,” he said afterward. “I’m just a California kid who doesn’t like rain, so I was just trying to grind and I worked as hard as I could. It just wasn’t good enough.”

At least now we can say Aloha to the islands and the five-hour time difference and we can thank Smith for avoiding a late-Monday playoff.

Time to get back to the Mainland and away from all that rain and wind.