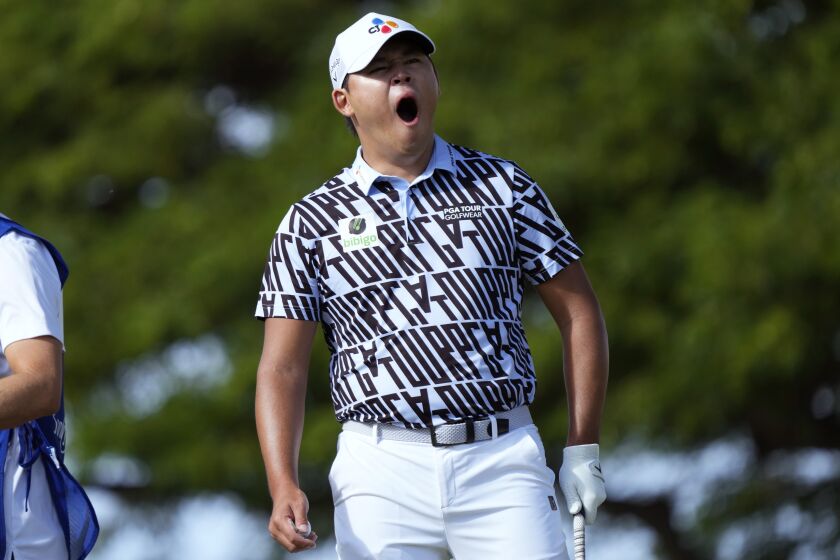 Si Woo Kim chipped in for birdie at the 17th and shouted for joy.

Newly-wed Si Woo Kim found himself three shots behind Saturday sensation Hayden Buckley when the final round of the Sony Championship started on a slightly rainy, windy Honolulu Sunday.

It had to seem like a lifetime to Kim since he won the 2017 Players Championship and perhaps just as long since he last tasted victory at the 2021 American Express.

So the 27-year-old South Korean decided he would go out and “Just play golf,” as he put it.

He made an early move on Buckley with three straight birdies to start his round.  He cut Buckley’s lead to a shot and it was game-on.

By late on the back nine at Waialae Country Club, it was down to Kim and Buckley as the other contenders turned into pretenders and left the serious business to Kim and fellow newly-wed Buckley.

Buckley didn’t help himself as he headed to the final nine.  He missed birdies from eight feet at the eighth and six feet at nine then failed to birdie the short (357-yard) 10th.  Buckley’s first bogey of the day came at 11 where he missed a five-footer for par.  He fell a shot behind Kim.  “I feel like the putting was a little shaky,” Buckley lamented afterward.  But he bounced back with a 17-footer for birdie at 12 then one from from 29-feet at 14 to retake the lead.

It was an emotional roller-coaster for both down the stretch.  Buckley lipped out a four-footer for par at 15 but then got a huge roar from the crowd when he canned a 16-footer for birdie at 16.

Kim, playing in the group ahead, missed the green at the par three 17th.  He decided to make an aggressive chip and his ball found the bottom of the cup for birdie that brought out a Tiger Woods-style fist-pump from Kim, who urged the crowd to get louder, perhaps so Buckley could hear it all the better.

The 18th saw Kim hit his drive in the left fairway bunker.  It was then that he pulled off a marvelous iron shot that found the green.  Two putts later, he was in for 64 and an 18-under total.  He headed to the practice green to wait with his new bride — Ji Hyun Oh — who plays on the Korean LPGA Tour and has seven wins there.

Buckley need birdie to tie.  His drive left him with an awkward lie, in the fairway but up against the rough-cut.  His second left him short of the green with a testy lie.  His pitch left him just inside 12 feet and that shaky putting failed to produce.  Kim breathed a sigh of relief on the practice green.

“It can’t get better than this,” Kim said as he prepared to hoist the trophy.  He talked about how he was searching for confidence.  It’s a scarce commodity on the PGA Tour when your last top 10 came at the 2021 Sanderson Farms.

Kim said his play at the Presidents Cup helped.

“My game was little down like at the end of the season, but I think that kind of like gave me momentum,” he said.

And now he heads to the American Express this week.  He won there two years ago and now that confidence level is a lot higher.

As for Buckley, his first win will have to wait, but he took this close call in stride:

“Winning on the PGA Tour is the hardest thing to do, and sometimes you just get beat,” Buckley said. “I feel like that’s what happened today.”