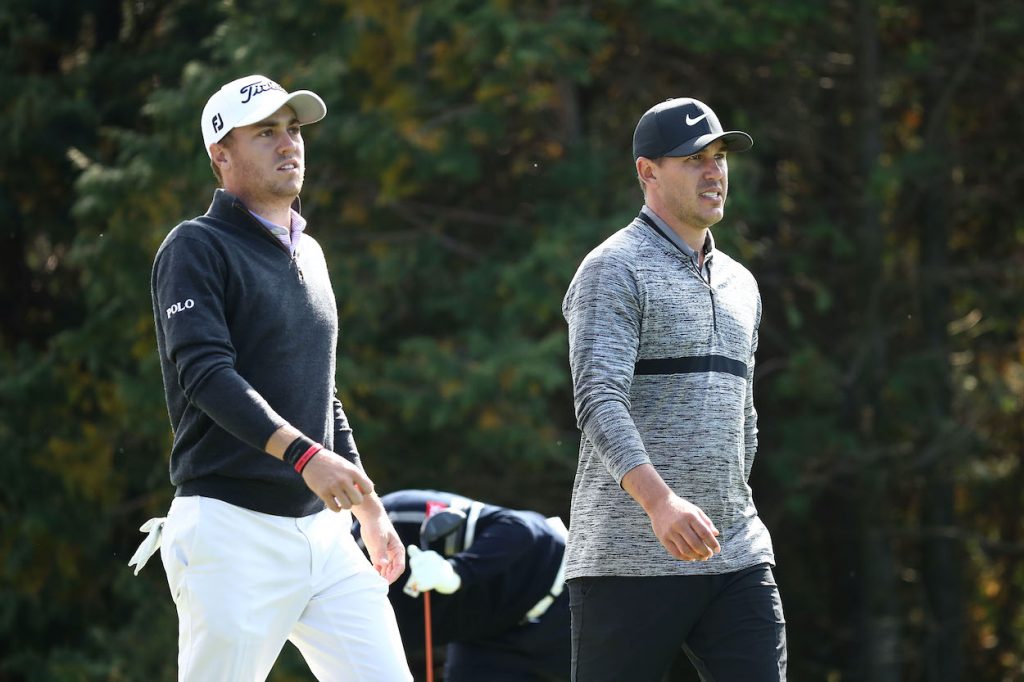 Justin Thomas and Brooks Koepka are both in this week's field at Mayakoba.

Last week’s Bermuda Championship was a PGA Tour event in name only.

Truth be known, it was a dreadful field, simply awful.  It was one of the weakest assemblies of talent in recent years with only eight players from the world’s top 100 in the field.  Need to repeat that — only eight of the world’s top 100 and one of them — Herbert Lucas, eventually won.  Lucas arrived in Bermuda ranked 57th in the world and the victory only jumped him up to 43rd — a testament to the weak field.

This week, the Tour heads to Mexico — Mayakoba — and the World Wide Technology Championship will have some, you know, actual name players in the field.  Justin Thomas has fallen to No. 7 in the latest rankings, perhaps a good reason why he’s showing up this week at El Cameleon.  J.T. needs a win — he REALLY needs a win.  J.T. hasn’t won since the 2021 Players last March although he did manage two good playoff finishes — T4 at the Northern Trust and solo fourth at the Tour Championship.

He’s the only top 10 guy in the field.  Tony Finau got pushed out of the top 10 by Jordan Spieth but Tony’s one good event away from jumping back in.  Tony checks in at No. 11.

Brooks Koepka’s showing up, he’s lucky No. 13 in the rankings and for a guy who says he’s going to equal or pass Tiger Woods’ 15 major championships, maybe he should start by simply making his way back into the top 10.

Defending champion this week is Viktor Hovland, who checks in at No. 17 in the world.  Abraham Ancer is quietly climbing in the rankings.  Abe’s up to 14 and it’s not out of the question that he could play his way into the top 10 this season.  His stock is steadily rising.

It’s starting to get really, really old but winless Ryder Cupper Scottie Scheffler is in the field and of course there’s the once-again raised question — is this Scheffler’s week to get that first win? Every time his name is mentioned, the phrase “it’s not a matter of if but when” comes up when the talking heads gush over Scheffler’s talent and abilities.

Patrick Reed’s in again this week.  He came within a shot of Herbert last week in Bermuda.  Reed stormed home with a dazzling 65 in windy, wet conditions.  It was easily the best round of the contenders.

Last year Hovland shot 20-under to beat Aaron Wise by a shot.  With a stronger field this week, that number could be lower.

Mayakoba is often remembered for the 2018 event and the Great Caddie Mooch Caper of that year’s winner — Matt Kuchar.  Kuchar had local caddie “El Tucan” on the bag and took serious flak on social media for not ponying up an appropriate caddie fee from the $1.3 million winner’s purse.  Kooch The Caddie Mooch shelled out about $5,000 to “El Tucan” and, in the process, became the Tour’s biggest cheapskate behind Tiger Woods.  Eventually Kuchar made things right, months later and threw an additional $45,000 “El Tucan’s” way.

All’s well between the two but don’t look for “El Tucan” on Kuchar’s bag this week.