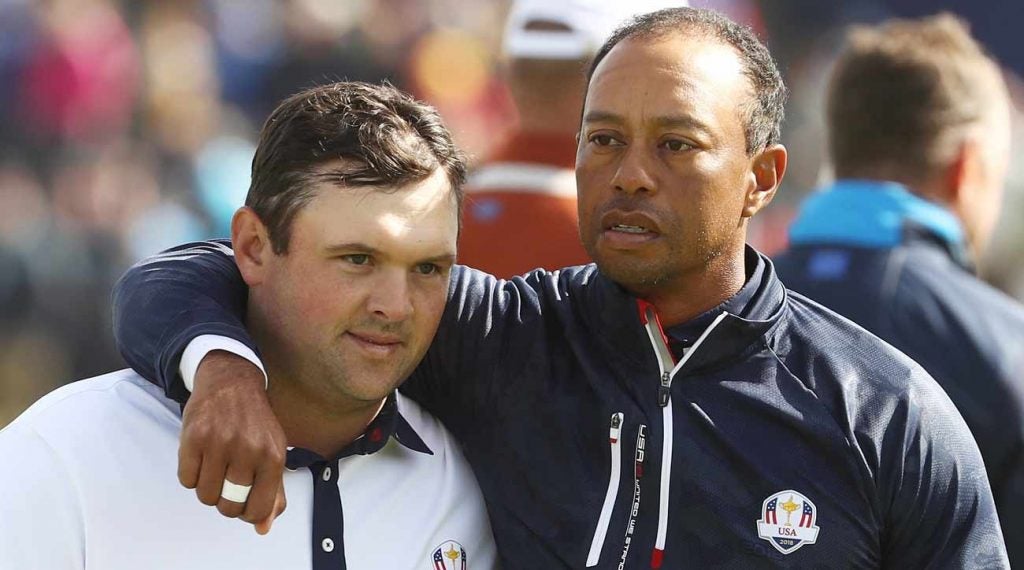 Patrick Reed complained about having Tiger Woods as a partner.

Steve Stricker has every big advantage when Ryder Cup play begins on Friday — course setup, order of play play the first two days and what should be a very, very vocal home crowd at Whistling Straits.

What Stricker will need to do is master “the art of the pairings” — especially when it comes to Foursomes, aka Alternate Shot.

The first two days of the Ryder Cup will feature eight Four Ball (best-ball) matches and eight Foursomes (Alternate Shot).  Stricker, as home captain, gets to pick the order and it’s not a reach that he’ll lead off with best-ball matches.

That is the easiest part of putting his players together.  With the U.S. firepower, Stricker needs to win that first session on Friday morning.

Things get really testy for Captain Stricksie when it comes to Foursomes — the dreaded Alternate Shot format.  The U.S. hasn’t exactly torn it up in that part of the competition.

There’s a lot to take into consideration — personalities, style of play and brand of golf ball.  Yes, you read that third one right.  Golf ball brand.  In alternate shot, the two players use the same ball, only one brand.

Here’s the brand of ball played by the U.S. team members:

With that many players (eight) playing the same brand, it’s much easier to put together alternate shot teams.  Don’t be surprised if Bryson DeChambeau doesn’t even play in the two alternate-shot sessions.  First, it would play havoc with DeChambeau’s array of calculations for each shot and second, DeChambeau’s smash-it and (hopefully) find-it style doesn’t translate well into the alternate shot scenario.  For the record, DeChambeau went 0-3-0 in Paris.

Don’t be surprised to see a return of the Spieth-J.T. pairing — especially in the best-ball format.  Stricker has a lot of options there.  His only “problem child” is Koepka, who has made his feelings clear on team play.  Depending on how his wrist looks in the practice rounds this week, don’t be surprised if Koepka is on the sidelines on day one.

The “Art Of The Pairings” is where Europe out-managed the U.S. team in the last Ryder Cup.

Then there’s the down time since the Tour Championship.  None of the U.S. players have competed since then and when a player has two weeks off, there’s no telling what they’ll look like coming into these matches.

It’s a good thing Butch Harmon has nothing to do with input into the pairings.  Last week, Harmon came up with this gem:

“I’d pair them together,” Harmon said of Koepka and DeChambeau. “I’d say, ‘All right boys, get your heads out of you’re asses and go play.’  I’d put them out the first day, first match out, Brooks and DeChambeau. I’d say, ‘Guys, I want you to suck it up and go win a damn point. This isn’t about you; this is about the Ryder Cup. This is about your team —  You can have your battles next week.’”

Sorry Butch, but that’s not gonna happen this go-round or maybe ever.

As it is, Stricker’s got a lot of thinking to do between now and Thursday.