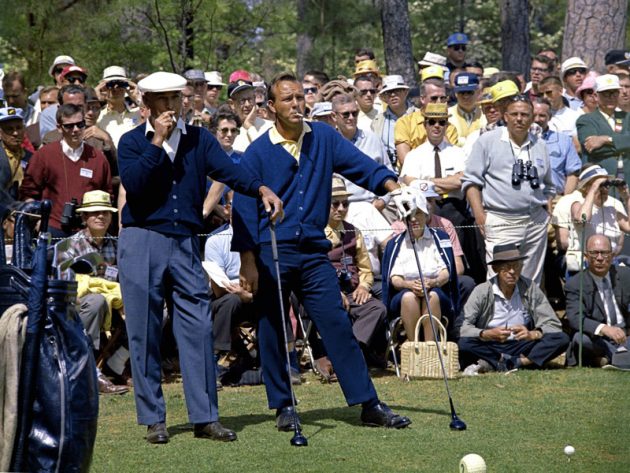 Posted By: Tom Edringtonon: September 21, 2021In: In Other News...No Comments

Ben Hogan was the captain of the 1967 U.S. Ryder Cup team that featured Arnold Palmer as the face of the team.

Hogan was known to be a man of few words, a guy who didn’t waste time and that was evident in the “pep talk” he delivered to his team before that ’67 staging of the Ryder Cup:

“You got these uniforms here.  If you don’t like the way they fit or whatnot, don’t wear them.  I never could play in somebody else’s clothes.  Doug Sanders, if you want to come out here and dress like a peacock, that’s fine.  Whatever you want. But let me tell you boys one thing – I don’t want my name on that trophy as a losing captain.”

That 1967 team went on to beat Great Britain and Ireland, 23 1/2 to 8 1/2.  There were obviously more matches then than there are today with the points adding up to 32 rather than the 28 we see today.

So before this year’s matches, U.S. Captain Steve Stricker is going to ZOOM Tiger Woods and let El Tigre deliver his own style of a “pep talk” to the team.  Truth be known, this team shouldn’t need any sort of “pep talk” and based on his ice-cold relationship with Phil Mickelson when both were in their prime, Woods isn’t exactly a beacon of U.S. Ryder Cup success.

Maybe Tiger can channel Hogan and deliver something like this:

“Listen you guys, first of all, none of you are as good as me, which is a good thing.  I sucked at the Ryder Cup because I’m the best individual player of my generation.  Some of you guys like each other, some don’t — I don’t care.  Just go out there, hit fairways and greens and make some damn birdies when it counts.  That’s all I got.”

That, in and of itself, would be epic.  Besides, no one outside the team room will hear it — sooooo — let ‘er rip, tater chip.

There’s A “What-If” In Case Of COVID:

It hasn’t been a factor for for about the last 30 years there’s been a plan to handle the possibility of an injured player not being able to compete in the Sunday singles for these Ryder Cup matches.

Each captain has an envelope with a player’s name on it who would sit out if there’s an injury to someone on the other team.  That player would sit out and the match is agreed to be “halved” giving each team 1/2 point.

European captain Padraig Harrington explained that for this week’s matches there is the normal injury envelope and a COVID-19 envelope in the event a player from either team tests positive for the coronavirus.  “If, God forbid, we had a COVID outbreak of a number of players, for one player it’s pretty straightforward, on Sunday you start losing a few players to COVID, it does affect the match in some way. But one is in a COVID envelope for sure,” Harrington said.

The scenario is unlikely.  All players from both teams were tested before leaving for Whistling Straits then again, once they arrived on site as well as PGA of America officials, caddies and other on-site volunteers and support people.