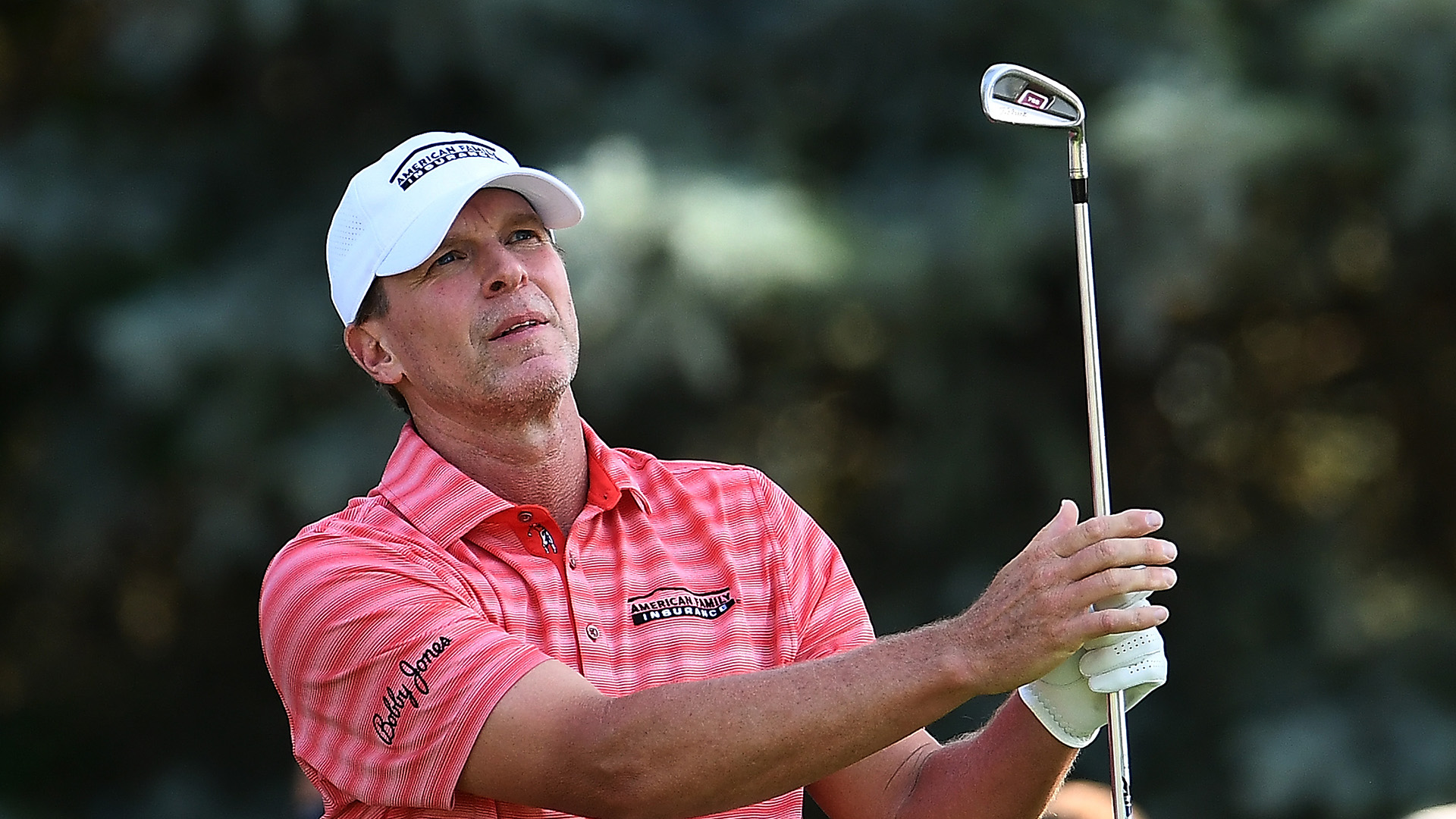 Steve Stricker is feeling good again and his game showed it.

Steve Stricker has slowly worked his way back from that mystery illness that sidelined him a few weeks following the Ryder Cup.  As of Thursday at the season’s first major, Stricker looks to be fully recovered.

Stricker dominated the par fives on day one of the senior season’s first major — the Regions Tradition and set the tone with a seven-under par 65.

Stricker made a birdie on all five of the par-fives at Greystone Golf and Country Club in Birmingham.  By day’s end, he had a clean scorecard with seven birdies, no bogeys.  He also had the lead by two shots over another familiar face — Miguel Angel Jimenez.  Tied with Jimenez was Wes Short, Jr.

It was only 11 days ago that Stricker made his return at the Insperity, where he shot 67 at the start then followed it up with rounds of 65-70 and eventually tied for second.  At last week’s Mitsubishi Electric, he shot 68-73-70 and finished in the top 10.

Stricker’s no stranger at this major championship — he won it in 2019 and has four senior majors on his resume.

Aussie Steve Alker has been a dominant force on the Champions Tour this season and the Schwab Cup points leader got off to another good start.  He was in a big group of players who finished four-under par.  John Daly was in that group with him.

Defending champion Alex Cjeka was four back of Stricker with a 69 along with Retief Goosen.

Madelene Sagstrom found the Upper Montclair Country Club to her liking Thursday as she put together her best round of the year to open play at the Founders Cup.

Sagstrom shot a nine-under par 63 that featured nine birdies, no bogeys.  She got off to a hot start with four straight birdies.  She was just a shot off matching her career low — a 62 she shot at the 2020 Gainbridge.

“It was one of those days,” Sagstrom said. “Like everything was easy. It’s like I was hitting the fairways, hitting the greens, and I was making all the putts. The hole just kept growing,” she recounted after her round.  “It’s one of those days — you just trying to hold on to momentum and just keep it going.”

As good as Sagstrom played, she was only a shot better than Megan Khang.  Khang had a clean card — eight birdies on a day where the course was soft, the greens were slower and there was little to no wind.  “Definitely stroking it really well, reading the greens well,” said Khang, who tied for third at Palos Verdes.

Nasa Hataoka, who won in Los Angeles in April before taking time off, was third after a 65.

Bianca Pagdanganan, Amy Yang and Giulia Molinaro were tied for fourth at 66, a shot ahead of group that included Lexi Thompson and Minjee Lee. Two-time defending champion and top-ranked Jin Young Ko shot a 69 as did world’s No. 3 Lydia Ko.