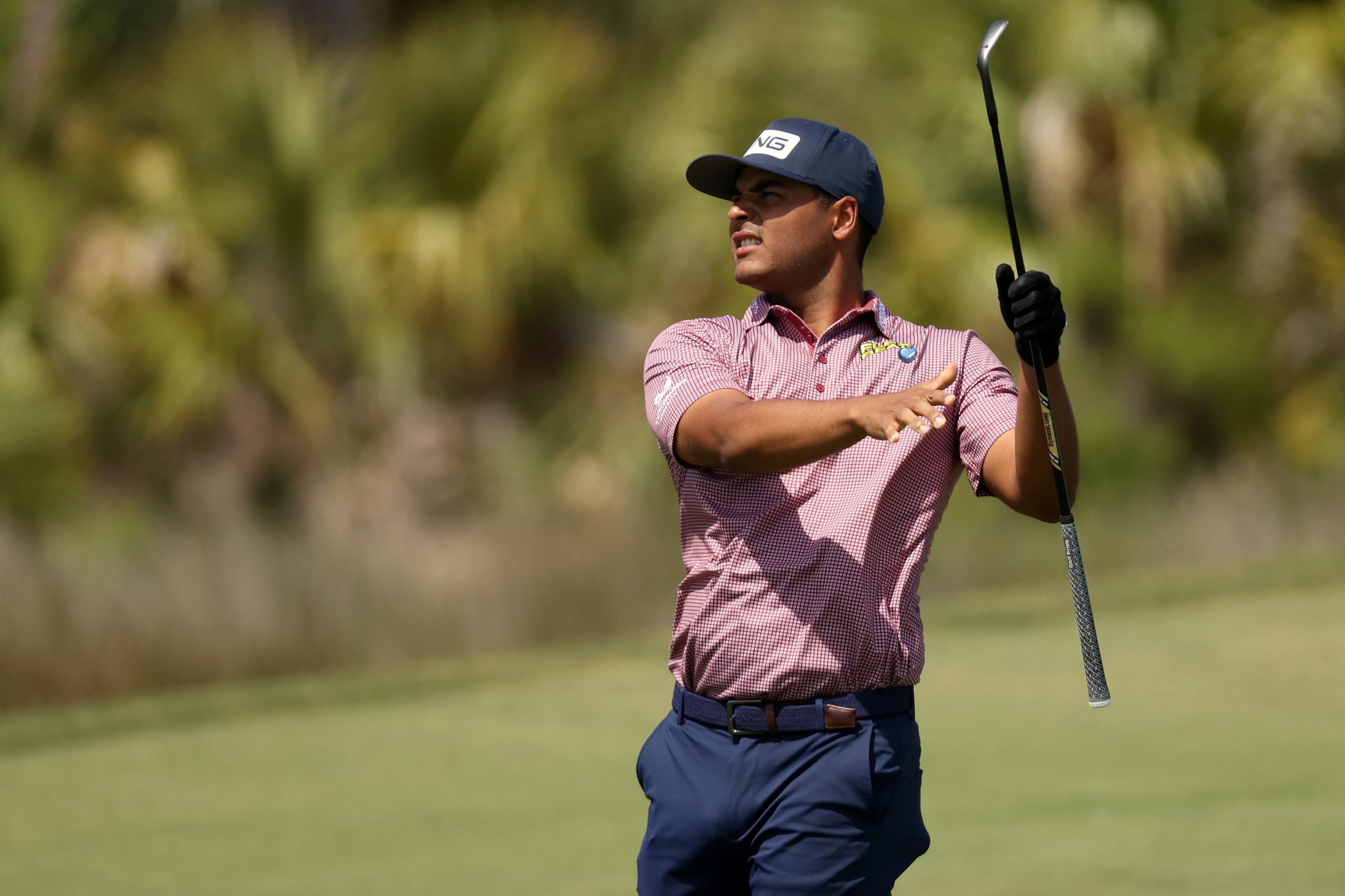 Sebastian Munoz shot 60 with a bogey on his scorecard Thursday.

Birdies were flowing in droves Thursday at TPC Craig Ranch and Sebastian Munoz made it look too easy at the Byron Nelson.

Munoz was one stray drive away from shooting a magic 59.  A wayward tee shot at the eighth hole cost him a bogey but he still made some PGA Tour history with a 12-under par 60.  Munoz became the first player to shoot a pair of 60s in the same season.  His other came last fall at the RSM Classic.  He also tied the Nelson tournament low round and set a course record at Craig Ranch.

“Easy — imagine the shot — hit the shot,” was how Munoz described his mindset as he went out early in the morning wave and set a number no one else would reach.  “Super-fun.  See how low you can go.  I’m happy, it was comfortable.”  He made it comfortable by hitting 12-of-14 fairways, 16-of-18 greens and used his putter just 23 times.  “Today, I don’t know. I just kind of kept it going and I just wanted to get more looks, more looks and more chances, and I just kind of went crazy with it,” Munoz added.

All of the par fives are reachable at Craig Ranch and two of the par fours are as well.  It made for an overall low scoring day as 65 player in the field shot three-under par or better.

Defending champion K.H. Lee, who made 28 birdies on his way to victory last year, was on his game again.  He opened with an eight-under par 64 and was tied with Mito Pereira, Peter Malnati and Justin Lower.  Kyle Wilshire was alone at 65.

Big name players also put themselves in the hunt.  Jordan Spieth and world No. 1 Scottie Scheffler played in the afternoon feature group with Lee.  Both Spieth and Scheffler shot 67s as did Dustin Johnson.  Justin Thomas got off to a slow start but eventually got rolling and shot 68 but a four-under par round only got you a tie for 25th.

Trey Mullinax had a chance to go really low but didn’t.  Mullinax started in the afternoon on the back nine and started a six-under par run over four holes.  After a birdie at 11, he made back-to-back eagles at the par five 12th then drove the green at the short par four 13th and made deuce there.  A birdie at 14 then another at the par five 18th had him seven-under for his first nine holes.

But Mullinax fell back to earth quickly at the first, his 10th of he day, when his drive found the water and he’d end up with a triple-bogey seven.  He went on to finish with 68.

One name you won’t see on the scoreboard is Brooks Koepka.  Koepka withdrew on Wednesday, giving no reason.  No injury was citied but it was believed to be his reason for the WD and that could put his appearance at next week’s PGA Championship in jeopardy.  Koepka has steadily fallen in the world rankings and now sits at No. 16.

The PGA Tour created a points system for college stars as a way to gain access to the Korn Ferry Tour when they want to turn professional.

With his inability to sign up professionals, LIV Commissioner Greg Norman said that he’d be filling his fields with top amateurs and the Tour made its move to prevent Norman from getting young college players who are on the PGA Tour University points list.  Norman could be going after players in the top 15 of the PGA Tour University rankings.

The Tour has previously stated that it “reserves the right to make final determinations regarding a player’s eligibility in PGA Tour University,” and this week it was reported that the Touradded two amendments:

Players who finish inside the top 15 of the final ranking will be ineligible for PGA Tour University, “and may not accept the performance benefits associated with a top-15 finish (in the current season and subsequent seasons) if such player competes in any professional golf tournament that is not ranked by the Official World Golf Ranking, excluding such events that have been previously approved by the PGA Tour.”

Pierceson Coody from the University of Texas currently leads those rankings followed by Jacob Bridgeman from Clemson.