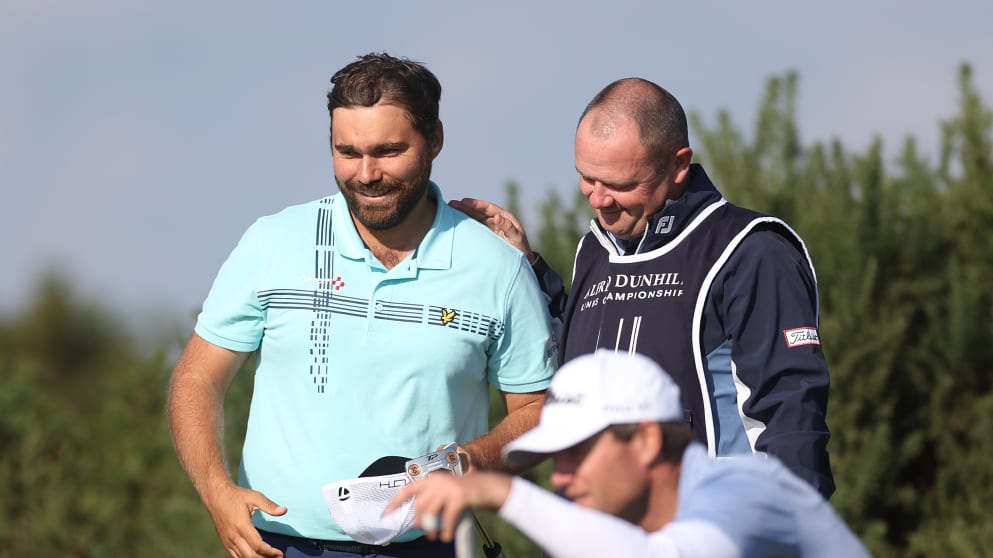 Frenchman Romain Langasque shot an 11-under par 61 on The Old Course.

There were two rare occurrences Thursday at the Dunhill Links Champions.  The first was a bright, sunny day in Scotland with little to now wind.  The second was world No. 272 Romain Langasque shooting 61 on The Old Course.

It is fall in the East Lothian region of Scotland, the part of the country that is home to so many ancient venues, including The Old Course at St. Andrews and Carnoustie.  Sunshine and no wind is an anomaly this time of year but that was what greeted the professionals and amateurs at the 2022 Dunhill Links Championship.

It was especially sunny for Langasque, a 27-year-old Frenchman who has one DP World Tour win and that came back in 2020 at the Wales Open.

He may want to put his first round scorecard next to that trophy.  His 61 equaled the Old Course record set in 2017 at this event by Englishman Ross Fisher.

“I’m so happy, the last three holes were really fun and I made long putts,” Langasque said after signing for his memorable round.  “It’s amazing. I didn’t realize that I have the course record here now and I think it’s something I will remember for the rest of my life.

“But it’s only the first round, so I’m also going to stay really focused for the next few days,” added Langasque.

Memorable?  That’s a memory of a lifetime.

Langasque started on the 10th hole and it was nothing spectacular.  Par at 10, no big deal.  Bogey at 11 — well — not what you’re looking for.  The 12th was playing 348 yards and his drive found the green — 52 feet from the hole.  He made that monster eagle putt and that helped put a 33 on his first nine total — still, he was well back in the pack.

A par at the first, ho-hum.  He then ran in a birdie putt from eight-feet at the second then at the fourth, he rolled one in from six-feet.  A 41-footer found the cup for eagle at the fifth after he reached the green in two.  He was four-under through five and the birdie kept coming.  He made one from 10-feet at six, 14-feet at the seventh, 21-feet at eight then polished off the spectacular nine with a three-footer at the ninth for an eight-under par 28!

Let’s say that again — 28 on the outward nine at The Old Course.  Added up to 61.  You’d figure he might have a pretty good lead but over at Kingsbarns, his countryman, Frederic Lacroix put together a 10-under par 62 at Kingsbarns.  The French made it a trifecta at the top when Antoine Rozner added a 63 on The Old Course.

Most of the big names were over at Carnoustie.  Rory McIlroy was there playing with dad Gerry.  Rory found some issues toward the end of his round and finished with a four-under par 68.

“I stated well (back nine) sorta stalled a little bit (coming home) I made some bad swings coming in,” McIlroy said after he finished.  “You’re not gonna get Carnoustie much easier than it played today. I left a few (shots) out there.

“It’s so nice to be able to come back to these places — especially with my family,” McIlroy added.  His round was three higher than the day’s low score at Carnoustie — a 65 by Thomas Pieters.

Alas, Scotland was out for revenge.

The Friday forecast was for winds that could blow up to 40 miles per hour and some heavy rain, just to make it more fun.  To try and get ahead of the worst of it, the entire field at all three courses will go off at 8:30 a.m. (UK time) with a shotgun start.

Good luck with that guys.

Friday morning update:  The weather rolled in and it was true Scottish weather — winds blowing 25-30 mph, rain sideways at times — the three links courses were now defending themselves and the elements were beating up the pros and brutalizing the amateurs.  We speak from the experience of playing Kingsbarns in winds that blew 30-35 mph, gusting higher during our 2019 trip.  It becomes a survival test and that’s what transpired during Friday’s second round.  It was a shotgun start to try and beat the afternoon winds, which were going to get stronger.  Romain Langasque, who shot 61 on The Old Course Thursday, was a quick six-over through 12 holes at Carnoustie, probably heading higher over par.  Rory McIlroy, who typically has difficulty in the wind, was four-over for his round through 15 holes and even par for the tournament.  England’s Eddie Pepperell summed it up best:  “It’s disgusting out here.”

Richard Mansell emerged as the 36-hole leader.  He shot an amazing four-under par 68 at Carnoustie and is alone at the top at 10-under.  Alex Noren was two shots back at eight-under.  He shot 69 at Kingsbarns.  Rory McIlroy, also playing Kingsbarns, shot 75 and was in at one-under.  Rory was heading to St. Andrews to play the Old Course on Saturday.