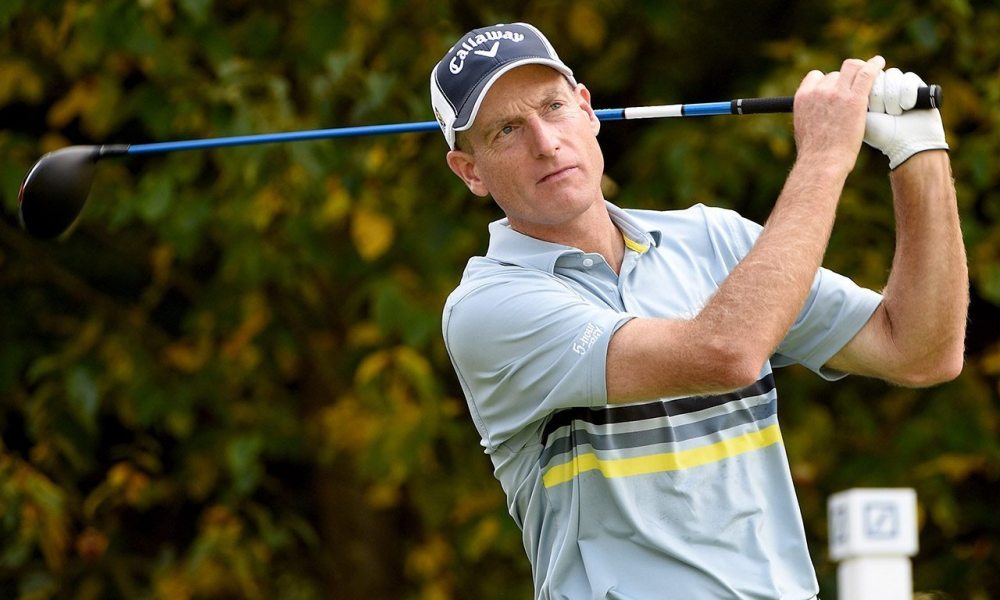 Jim Furyk stumbled early but rallied for a three-shot victory.

Through the 100-degree heat and Saturday storms that leveled trees and towers at Omaha Country Club, it was Jim Furyk who beat the field, the course and became the eighth player in history to win the U.S. Open and the U.S. Senior Open.

Furyk started Sunday’s round with a four-shot lead thanks to rounds of 72-64-66.  He made a sloppy bogey at the second hole then saw things really get testy when his tee shot at the par three third buried in the wall of a greenside bunker.  He failed to get it on the green and after a second bunker shot, two-putted for a double-bogey five that saw his lead cut to a single shot.

But the veteran player, winner of the 2003 U.S. Open, relied on his experience, kept his poise and got back to six-under par at the turn and led by three heading to the final nine holes.

A birdie at 13 got him back to seven-under and a bogey at 15 dropped him back to six.  But the difficulty of the course kept anyone from getting close to him.  A super second shot into the 16th stopped a foot from the cup and that birdie took him back to seven-under.   A one-over par 71 was good for a three-shot win over runners-up Mike Weir and Retief Goosen.  Wier’s closing 67 was low round among the contenders.

“I’m not sure I ever felt comfortable,” Furyk said after his victory.  “It’s a difficult course to score.  I was really happy to see that scoreboard at 17.  I wanted to keep an eye on Retief (Goosen) on the back nine.  This is a dangerous golf course.  Thankfully the rain softened it up for us.”

It was the third senior victory for Furyk this season and his first senior major.  He did it with his steady play and as his long-time caddie Mike “Fluff” Cowan put it:  “He’s a fairway hitting son-of-a-gun.”

And now he’s one of those eight who has both USGA trophies.

Nasa Hataoka led the Marathon Classic by six shots heading into what would have been Sunday’s final round.  Then the rains came.

The LPGA Tour tried to get the final round of the Marathon Classic going early in the morning but rain put an end to the tournament after the course became unplayable.

LPGA senior manager of rules and competition Donna Mummert explained why the tournament was reduced to 54 holes, despite all players having tee off in the final round:

“We were able to start on time and played through the rain,” she said, “but at 9:40 (a.m. ET) we started losing the greens and the rain just continued.”

The players were called in and there was a seven-hour wait but conditions only got worse.  A Monday finish wasn’t an option with more day-long rain in the forecast and this week’s event — the Great Lakes Bay Invitational in Michigan, is a Wednesday start.

It was Hataoka’s tournament to win after the first three rounds as she shot 61-69-64 to get to 19-under par and was a whopping six shots clear of her nearest competition.

After she was declared the winner, Elizabeth Szokel and Mina Harigae tied for second at 13-under par.

“Knowing that everybody is working really, really hard to try to get this to a 72-hole tournament, it’s – I wish it would’ve been able to do it, but with this weather it was really hard,” said Hataoka, who sat through that seven-hour delay before her victory was decided.

It was a fourth career win for the 22-year-old Japanese star, who will play next week in Michigan but is among the players who will skip the Evian Championship to prepare for competition in the Olympics.

John Smoltz had the American Century title in his sights Sunday afternoon in the celebrity event at Lake Tahoe but he couldn’t withstand a final rally from Vinny Del Negro.

Del Negro, a former NBA coach and player, tied Smoltz with a two-putt birdie on the 54th green, sending the two to a playoff after they finished tied with 69 points each in the Modified Stableford scoring format.

The second trip down 18 was simply awful for Smoltz, the former Atlanta Braves pitching star.  His tee shot found the trees then he hit another tree with the second.  His third was a low-percentage attempt to reach the green on the par five and he pulled it into the water left of the green.  Meanwhile, Del Negro applied the pressure from the get-go with a good tee shot and an eight-iron second to the front of the green.

With Smoltz making bogey, Del Negro had three putts from 35 feet to win and he only used two, finishing with birdie.

Del Negro is the first basketball player to win this high-profile celebrity event.