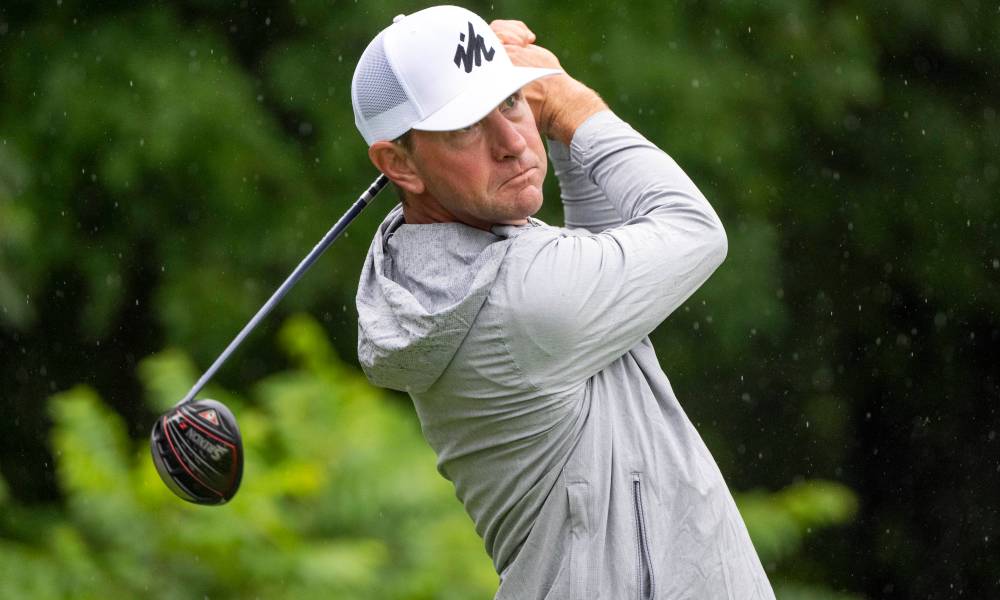 John Deere Drought-Ender: Lucas Glover Is A Winner Once More

The last time Lucas Glover stood with the trophy at the PGA Tour event was 2011 and he was the winner of the Wells Fargo championship.

The 2009 U.S. Open champion then went on a long, 10-year victory drought that came to an emphatic end on a rainy Sunday afternoon at the TPC Deere Run.

Glover charged home with five straight birdies starting at the 12th hole that gave him a seven-under par 64 and a winning 19-under par total, two better than Ryan Moore (68) and Kevin Na (68).

It was emotional win for Glover, who was three-under at the turn but bogeyed the 11th before he went on the birdie run.  “It’s been a long 10 years,” said Glover, who posted his score and had to wait the the last four groups to finish before it became official.  “It’s great — first time my wife and kids have seen me win as a family.  Putts started going in.  I ironed it pretty well the last two days.  I’m pleased with my putting and ball-striking.  I think I did a good job of keeping the pedal down.  Twenty (under par) was the number I had in mind for me.  Too many good players and the greens are too good for them not to make a lot of birdies.”

But for most, there weren’t a lot of birdies.  Glover’s 64 was the lowest among the top 10.

Sebastian Munoz held the overnight lead at 16-under par but he had trouble early and made bogey at the first hole after he shanked his approach.

All Munoz could muster by day’s end was an even par round of 71 and that dropped him down into a tie for fourth with Adam Schenk (67), Luke List (68) and Scott Brown (69).

Kevin Na finished with 68 to tie Moore for second.  He hurt himself in his run for the championship when he played the three par fives in even par.

Moore’s finish qualified him for a spot in this week’s 149th Open Championship at Royal St. George’s.  Likewise, Na was already in the field for the final major of the season but pulled out, not liking the COVID protocols set up by the R&A for the championship week.

If you think the algorithms for the Official World Golf Rankings need an overhaul, you’re spot on!

Jon Rahm finished seventh at the Scottish Open Sunday, Dustin Johnson hasn’t played for a few weeks and somehow, D.J. is No. 1 again and Rahm is No. 2.

Rahm had been No. 1 since winning the U.S. Open.

On the PGA Tour, Lucas Glover won for the first time in a decade at the John Deere Classic and moved from 115th to 79th.