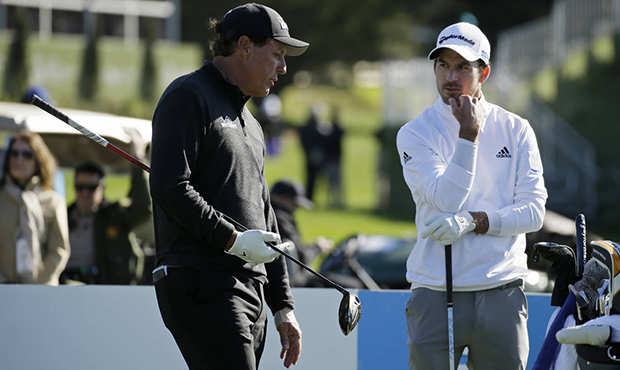 Survivor! — Nick Taylor Outplays Mickelson And Everyone Else At Pebble Beach

Phil Mickelson had a lot going for him in his Sunday showdown with upstart Nick Taylor at Pebble Beach.

Mickelson has 44 PGA Tour wins, Taylor had just one — at the Sanderson Farms, a miniscule fall cross-over event.  And that came five years ago.

Mickelson was playing in his 620th start, Taylor his 160th.

So you’d think Phil just might overpower the 31-year-old Canadian over the final 18 holes on a course Mickelson played so well on Saturday.

Funny how things can turn out in this silly game called golf.

Things swung quickly toward Mickelson.  He birdied the second hole to get to 17-under and was suddenly even-up with Taylor, who led after every one of the first three rounds.

That early move failed to rattle Taylor, in fact, by the time Mickelson went double-bogey, bogey at the eighth and ninth holes, Taylor founds himself with a fat five-shot lead at the turn thanks to three birdies and a sand-shot hole-out for eagle at the par five sixth.  A single bogey kept it from being a virtually perfect front nine, but Taylor still found himself at 21-under par and cruising.

But the cruise didn’t last long.

Mother Nature intervened and she threw some nasty 20-30 mile per hour winds at Nick, Phil and the rest on the back nine and the result was a period of chaos that showed how to combat the distance dilemma — ultra firm greens, small targets and wind with some real teeth.

Pebble bit Taylor, he bogeyed 11 and 12, opening the door for Mickelson, who was unable to accept the invite.  Phil bogeyed 12.  At the 14th, the brutal par five, Taylor was in trouble from his tee shot and things only got worse from there.  At that point, the wind was strong enough to blow Taylor’s cap off his head.  It also blew his lead.  By the time he tapped in for a double-bogey seven, his lead was down to just two shots — a bogey-birdie swing could evaporate his advantage.

Taylor then took matters into his own hands on the 15th.  He pitched in from the thick stuff just short or the green for a spectacular birdie and righted the Good Ship Canada at that moment.  He was three clear of Mickelson with three to play although up ahead, Kevin Streelman was making a birdie run that would clinch the pro-am side of things for him and sand-bagging partner Larry Fitzgerald of Arizona Cardinals fame.  Streelman birdied 14 and 15 then added another at 17.  A par at 18 and he posted 15-under.

After his par at 16 and a Mickelson bogey, Taylor was sniffing victory.  He sealed the deal with a gem of an eight-iron into the 17th that settled inside seven feet.  He calmly made that then turned the 18th into an easy, three-shot par five.  The only matter left was Mickelson’s birdie putt from inside eight feet to move him into the world’s Top 50.  He missed, capping a back nine to forget, as far as Lefty was concerned.

In the end, Mickelson admitted he was simply out-played.

“It’s disappointing to not have won,” Mickelson said.  “But I got out-played.  Nick played better than I did.”

As for good-guy Taylor, he looked somewhat overwhelmed with what he had just achieved.

“That was awesome,” he quickly observed.  “An up-and-down day.  To do it in that fashion — playing with Phil.”

A stunner for sure.  In the end, Taylor’s 70 was a super round in the conditions and considering the profile of the stage he was on.

Nineteen-under — two better than he started the day, good enough to clip Streelman by four and Phil by five.

Nick’s never played in The Masters.  His invite will be on the way shortly.  Majors haven’t been on his calendar.  Perhaps now they will.

Meanwhile, back in Canada, the cold air just got a bit warmer.

One of their own survived an extreme day at Pebble Beach and stepped into the winner’s circle with some skill, finesse and a calm demeanor in the face of pressure.