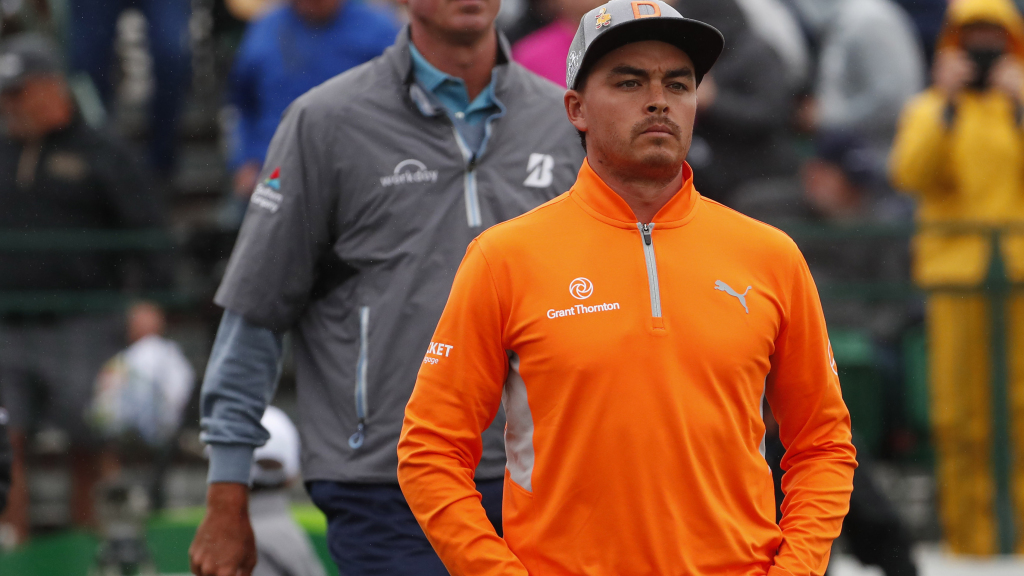 Rickie Fowler kept his cool when chaos surrounded him on Sunday.

Johnny Miller called it quits a day too soon.

He missed the Mayhem that was the final round of the Phoenix Open on Sunday.

Johnny missed calling the collapse then the incredible rise of Rickie Fowler, who is finally and deservedly the champion of the event that has brought him to tears in the past.

This victory by Fowler is unprecedented on the PGA Tour.  No player has ever made a double and triple bogey in the final round of a tournament and gone on to win in the past 36 years.

Rickie has and he did it with a display of cool courage that brought him from the brink of disaster to his fifth tour victory.

The TPC Scottsdale looked like something out of an old Open Championship in Scotland — cold, rainy and ugly with a high misery index.  Drives that soared past the 350-yard mark all week, found cold air and wet grounds keeping those drives back in the human range.

At times the rain poured making it difficult at best.

“It wasn’t easy out there today,” said new champion Fowler in a major understatement.

Then fate would try and take Rickie down.

At the difficult par four 11th, Fowler’s drive found the right rough.  With the down-pour beginning, his second was just short of the green, in good position for a routine pitch.  The pitch was anything but that.  With water between the club-face and the ball, it came out hot, then hydro-planed on the wet green, took a huge skid, jump and found the shaved slope behind the green.  Rickie’s routine third shot ended up in the water.  After a drop, Rickie was up on the green, surveying where he wanted to land his fifth.  Then, out of nowhere, the ball started rolling on its own — back into the water.  That would cost Rickie another shot.  He got his sixth to 17 feet and made it for triple-bogey.  Talk about a huge putt.  Still, Fowler walked off the green in a state of shock and now a shot behind Branden Grace, who just birdied the par five 13th.

Rickie’s slide continued with a bogey at the par three 12th, thanks to a pulled tee shot into a tough bunker lie.  The wheels of the Fowler Express were wobbling.

He made par at 14 then hit two great shots into the par five 15th, two-putted for birdie to right the ship.

The short par four 17th had taken Fowler down the past two years.  This time around it would prove his salvation.  Grace found the water there with his drive, put his third in the back bunker and walked off with bogey.  Rickie drove it perfectly this time and two putts later, found himself at 17-under thanks to those two birdies at 15 and 17 then the bogey by Grace.

Rickie closed the deal with a scrambling par at 18 and with the rain falling around him, his arms were raised in triumph.

“I’m happy that I just kept pushing forward,” Fowler said of his determined play after the disaster at 11.  “I’ll tell you what, it wasn’t fun but other than two holes, it was a pretty darn good round of  golf.”

A while back this year, Butch Harmon told Rickie that he needed to have some good old fashioned toughness this season.

Rickie had a lot of that on Sunday.

With his entire family on hand, Fowler was joyous to win for them.

“I’m just glad to get this one for my father and grandfather,” he said.

There was nothing normal about this final round in Phoenix.

It was mayhem, incredibly bad breaks, ugly conditions and a great display of determination by the now 30-year-old Fowler.