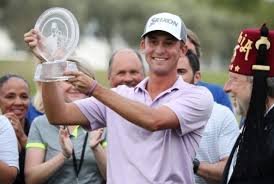 Smylie Kaufman had no fear of going low Sunday in Las Vegas.

These Are NOT Your Father’s PGA Tour Rookies!

One of the toughest things to do on the PGA Tour is shoot a really, really low number on Sundays.

That task may be even tougher for rookies but this new crop of rookies on the PGA Tour are not your father’s rookies.

Smylie Kaufman went from rookie to winner’s category last week in Las Vegas and basically changed the course of his young career. He went from not knowing how his schedule would go to planning trips to the Tournament of Champions, the Masters, the PGA and the select invitationals like the Memorial.

“I can’t put it into words,” was his humble reaction when he withstood a half-dozen players trying to beat or tie him as he watched on a televison in the caddies’ lounge with good pal and fellow rookie Patton Kizzire.

Kizzire put up his own low round the final day, a 63 that jump started his season. He’s no stranger to accomplishment — he was the leading money winner on the Web.com Tour.

Which takes us to that tour. The Web.com has become a solid proving ground for young players and a refuge for those older players on the verge of being washed up.

Kizzire, a newly-wed, finished in a tie for second and was there sitting with Kaufman, supporting his long-time friend.

While we’re applauding Kaufman and Kizzire, let’s not forget Emiliano Grillo. His victory two weeks ago at the Frys.com makes it two-for-two for rookies off the Web.com Tour.

Again, these rookies are simply not afraid to win.

Grillo drew notice on the European Tour, his success isn’t that big a surprise.

For Kaufman, it’s taken a while for him to discover his “path.” “It took me a really long time to understand my path and put all the pieces together,” he explained. He called last Sunday’s experience “kinda wild.”

It was nerve-racking for him to sit there and watch other players coming down the stretch and not getting it done.

“Much more than playing,” he admitted.

Kaufman is now on top of the PGA Tour’s money list. Gotta be nice when you’ve already banked $1,280,571. That will take away a lot of your normal rookie-year worries.

Hardly, these guys have worked for it and it shows.

They’re not your father’s rookies.