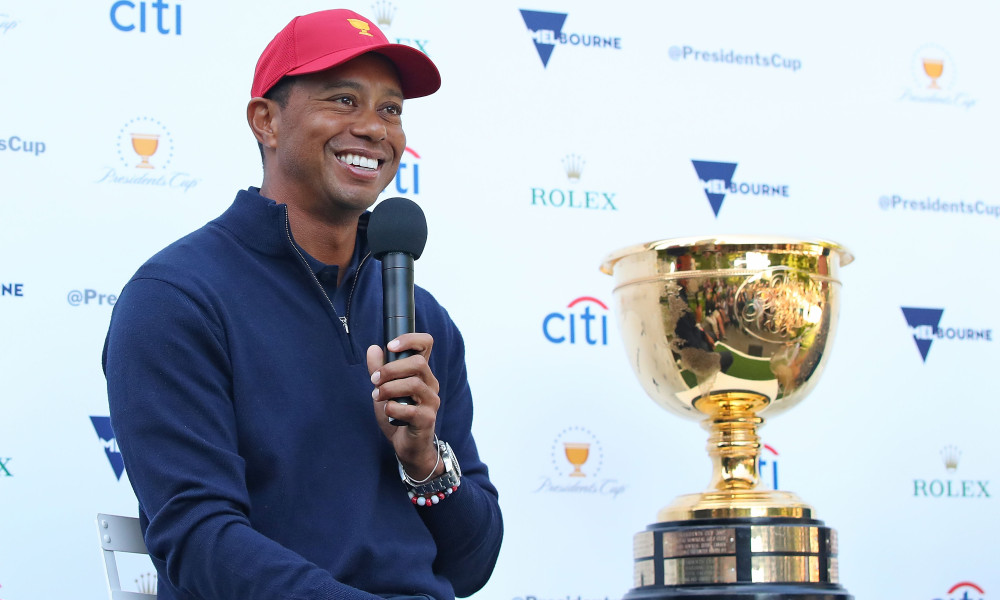 Tiger Picks Himself (He Had To) For Presidents Cup Team

Tiger Woods was going to make himself a Captain’s Pick for the upcoming Presidents Cup matches.

Tiger did indeed pick himself to play against the Internationals.

Why?  Ernie Els, Captain for the International team, was quick and to the point:

I don’t think he’s got any choice,” said the Big Easy.

Tiger had to pick Tiger to save this sleeper of an exhibition — and that’s exactly what it is — an exhibition.

The captain’s picks were revealed to those who cared early Thursday evening with Woods sitting comfortably within the swanky confines of his restaurant in Jupiter — Woods Jupiter.

The early-bird menu was Woods offering up his four-man buffet to complete the U.S. team that will face the Internationals next month in Australia.

Woods didn’t waste much time and got right to it — in this order.

That first name came as no surprise, Finau was on everyone’s list to make the team as a captain’s pick, it was surprising he didn’t qualify automatically.

Then came the surprise.

Reed stirred the pot of controversy at the last Ryder Cup matches where the U.S. lost to Europe.  Reed basically threw everyone under the bus after that loss,  including Woods.

“He’s as fiery as they come,” Woods commented.  Reed remains the rogue of match play.  He played poorly at the Ryder Cup and basically made his reputation in his singles match with Rory McIlroy four years ago.

This one was no surprise whatsoever.  “His first team event,” Tiger pointed out of the reigning U.S. Open champion.  “You couldn’t have a more competitive guy.  All the players wanted him on the team,” Woods said of those who were the automatic qualifiers.

The anticipation was growing with three of the four picks in the bag.  Who would be the fourth?

Yes, Tiger Woods chooses Tiger Woods as Woods began to speak in third person.  He is making his ninth Presidents Cup appearance and it was no shocker that Woods announced his name.

He gave some insight into his decision to become the event’s second player/captain.  Hale Irwin was the only other man to go dual roles and that was back in 1994.  “I’ll have dual roles,” Woods said, “the players wanted me to play.”

So did virtually everyone else — Cup organizers, television programmers, the country of Australia and the rest of the golfing world.  No one wants to watch this pumped up exhibition and see Woods in a cart with an ear-plug in his ear.

Woods noted that one of his three vice captains — Fred Couples — kept bugging him from the start to pick himself.  “He kept telling me ‘You gotta play, you gotta play,’ Woods said.  Tiger went on to talk about how he had to tell Couples it was a matter of wait-and-see.  “Not making the Tour Championship actually helped.  I was able to have my surgery and more time to rehab,” Woods added.

The deal sealer was Tiger’s win at the ZOZO Championship in Japan, where he tied Sam Snead’s tour record of 82 wins.  “That basically made up my mind,” he said.

How much Woods plays in the matches remains to be seen.  Each team member must play in the singles and in one team match, minimum.

Tiger also has one player he’ll need to monitor — world’s No. 1 Brooks Koepka.  Koepka suffered a setback from a knee injury this fall.

“He’s rehabbing right now.  I told him to keep me in the loop,” was Tiger’s update on Brooks.

The matches will be staged at Royal Melbourne Golf Club, Dec. 12-15.  It was the scene of the only U.S. loss in Presidents Cup history, back in 1998.

“Yeah, and I was on that team,” Woods reminded us.