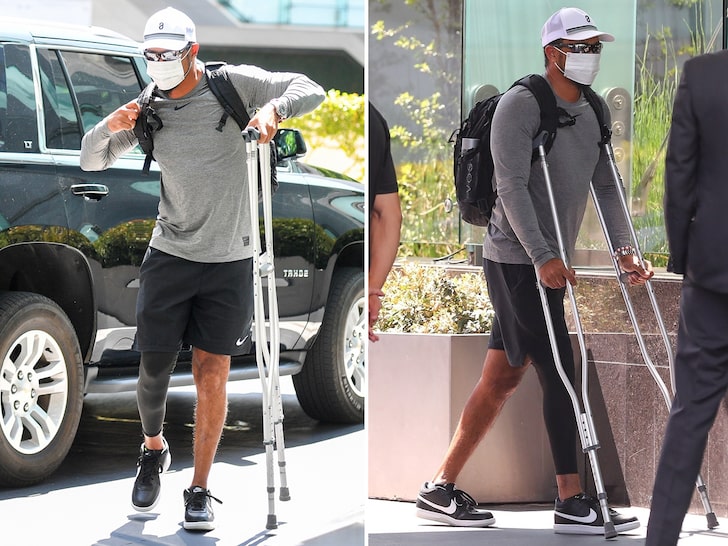 Tiger Woods made a trip to L.A. and was seen putting weight on his right leg.

Tiger was spotted this week in Los Angeles and it looks like he’s now able to put some significant weight on his surgically-repaired right leg.

It’s been five months since Tiger lost control of his vehicle on a winding Los Angeles road on February 23rd and severely injured himself in the single-car accident on his way to a Golf Digest content shoot.

As you can see in the photos above, Tiger still wears that protective compression sleeve on his leg and he’s still using crutches to get around but he’s looking a lot more mobile.

Tiger had checked into a Beverly Hills hotel and observers reported that he was able to stand on the leg and could walk on it a bit as well.

Next step in Tiger’s rehab process will most likely have Tiger in one of those chest-deep pools that actually have treadmills underneath the water.  It allows the patient to walk unaided as the water puts you in zero gravity with no weight on the injured limb.

NFL players use it, most all professional athletes do as part of the injury recovery process.

Tiger’s still got a long way to go before he can even think about swinging a golf club.

If and it’s a big “IF” Tiger can get himself back to playing again, the question is:  Where might he try and play for the first time?

Our guess, and it’s purely a guess — how about the 2022 Open Championship — the 150th anniversary celebration at the Old Course at St. Andrews?  That’s a year from now.

We can only hope.

Annika Sorenstam has been showing up now and then and she finally got serious about a return to competition on day one of the USGA Senior Women’s Open.

The Hall of Famer, winner of 72 LPGA events, shot a five-under par 67 at Brooklawn Country Club in Fairfield, Conn.

She’s tied for the lead with Dana Ebster, a shop assistant and a California junior college assistant golf coach who once spent enough time on the LPGA Tour for a couple of cups of coffee.  She handles the junior program at Turlock Country Club in Turlock, California

“Yeah, it was very special,” Sorenstam said following her first round. “Had a few butterflies, to be expected I guess, but it’s nice to be back and see some friends in the crowd. Again, just catching up with all players makes for a great week.”

Annika’s round had just a single bogey and she got her piece of the lead with a birdie to close her round at the 18th.

“You know, I mean, I have been practicing, but it’s different to come out here and play, especially around the greens here,” she said. “These greens I think are what really makes the golf course. Super happy with the way hit it. I can be a little more aggressive on my putts. It’s a fine line there.”

Emma Talley is in position for her first victory at the co-ed ISPS Handa World Invitational.

Talley shot 65 on Friday and stands alone at 13-under at the Galgorm Castle Resort in Northern Ireland.  She’s three shots clear of Chella Choi and fellow American Jennifer Kupcho.  Both are in at 10-under par.

On the men’s side of the competition, 23-year-old New Zealander Daniel Hillier fired a 62 and got to 11-under par at the midway point.  He’s a shot in front of England’s Jordan Smith, who added a 68 to his opening 62.

Both men are in search of their first European Tour wins.  Hillier is ranked 678th in the world, Smith checks in at No. 241.