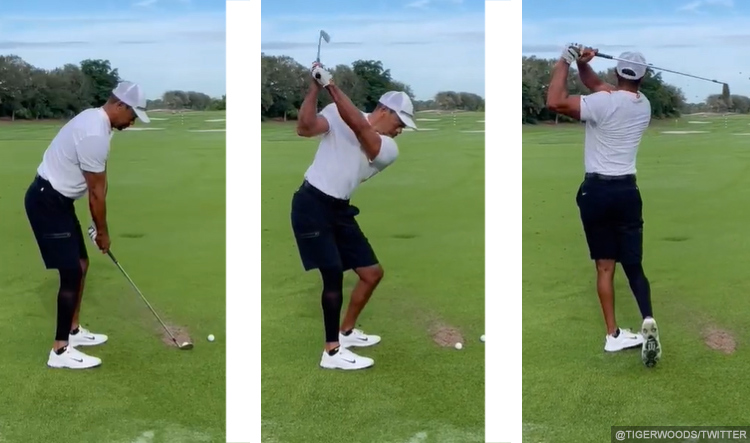 No less than 5 million have already looked at Tiger's "rehab" swing.

Forget having a formula or a contest or whatever The Sheriff Of Nottingham (aka Tour commish Jay Monahan) want to call that PIP nonsense — just hand over the first place check for the chief social media needle-driver for all of golf, much less the PGA Tour, to His Majesty Tiger Woods.

Tiger Woods does not “drive the needle” of social media clicks, Tiger IS the needle!

So The Sheriff (aka Commish Monahan) isn’t saying exactly who took all the PIP (Player Impact Program) money for 2021.  Suffice to say, most of it should go to El Tigre and we’re not the only entity to proport that notion.

“What they should have done is taken all $40 (million) of it (PIP money) and sent it to Tiger and say, thank you.  We wouldn’t be here if it wasn’t for him. When he posted that picture of himself on crutches it outperformed the last four tournament winners (on social media). If he even tried it’s over.”

So said Tour player Scott Stallings and you know these guys out there talk amongst themselves when it comes to stuff like this.

As for who ACTUALLY received the PIP money, well The Sheriff isn’t talking.  When asked about said monies last August at the Tour Championship, here’s what The Sheriff said:

“We don’t have any intention on publicizing it.  To us, it’s a program that we created, was created by our players, with our players, for our players, and that’s what we decided that we were going to do when we created it.”

Well, we don’t need The Sheriff to tell everyone that no matter what short of warped formula or algorithms you use — The Big Cat, aka Tiger, is a social media monster.

Tiger posts a single video of him making one easy swing with a wedge on the range at The Medalist and VOILA!  You’ve got north of five million views on Twitter.

When it comes to Tiger, well, when he posts, the internet world stops, looks then talks.

Tiger’s the undisputed King Of Viral.

So The Sheriff didn’t need to tell us that Tiger is No. 1 in Player Social Media Impact.  And no one else comes close.

Brooks Koepka and Bryson DeChambeau could hold an arm-wrestling contest and if Tiger’s walking around Los Angeles without a cane or crutches, sorry Bryson, sorry Brooksie, you’re irrelevant.

Jim Herman isn’t exactly your household Tour name.  Most of his attention came when it was revealed that he’s good buddies with former President Donald Trump.

Herman has no idea who gets what and when from the PIP money.

“No idea,” Herman said and laughed about it when someone asked him to explain how the PIP list is created. “I wish we had a list. I wish we knew, so if a guy is on the list and he’s close and had an idea of what they needed to do to crack the top 10.  That’s the hardest part for the rest of us.  They are throwing a lot of money out there without a real good understanding of how you can crack the top 10. We feel like it’s a popularity contest.”

Now we know there are a few leaks here and there out of the palatial Tour headquarters in Ponte Vedra and one of them leaked this:

“The Tour will not show the entire list to players, or anyone else for that matter, but will tell each player where they are on the list, which only seems to fuel the confusion over how the list is compiled.”

Tour winner Brendan Steele doesn’t know.  “I can’t explain in detail, but it has to do with social media and news and they are supposed to filter out things that are negative. I don’t know how they do that,” Steele said.

Chesson Hadley suspects what everyone else suspects:  “It’s a way for Tiger Woods to be rewarded even more for what he’s done for the game of golf,” Hadley said.

Notice The Sheriff and his Band Of Henchmen have some means for filtering out “negative” stuff.  Which makes us wonder where Tiger’s car wreck last February would fit in?

At East Lake where The Sheriff was confronted with the issue, well, he was pretty mum.  He said that the objective of the program is to get “players to engage in our game, help grow our Tour, and help grow their own respective brands.”

So where is the line between that and controversy?

And who, if anyone, can drive clicks, views and make posts go viral the way Tiger Woods can?

That’s an easy one to answer.