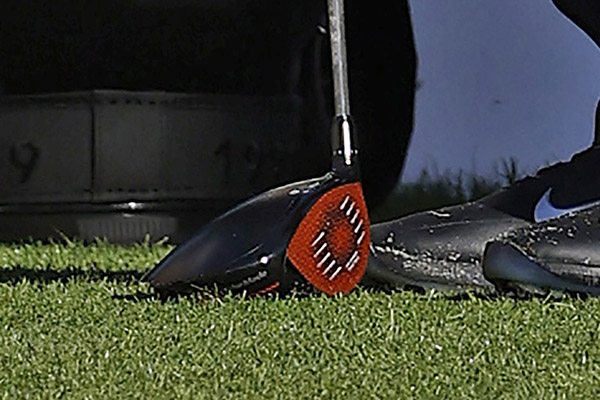 Tiger's "Red Face" driver attracted a lot of attention at the PNC Championship.

Sure Tiger Woods and son Charlie attracted ALL the attention at the PNC Championship two weeks ago.

But it was a new piece of equipment Tiger used that drew a lot of attention.

TaylorMade, Tiger’s equipment sponsor, has come out with its latest creations — the Stealth and Stealth-Plus drivers and El Tigre had the Stealth-Plus in his bag at the Ritz Carlton Golf Club.

Of course, Tiger’s the perfect company man/spokesperson because he was touting its performance:

“First of all, they have moved the (center of gravity) more forward so I’m able to curve the ball more, and you guys all know that I’ve always been a player that has worked the golf ball.

It’s given me the ability to hit draws and hit cuts.   “I didn’t like having just only one shot. The driver setup that we have for Augusta allowed me to draw the golf ball. But when I hit the cut, it was really short. I don’t have that difference anymore. They are very similar, which is huge. And hey, got to love the colors.”

Of course “the colors” Tiger was referring to is the Stealth-Plus has a red face and black crown — red and black, Tiger’s choice of fourth round apparel.

If you took a close look, you saw the “Carbonwood” label and the sole and “60X Carbon” on the face of Tiger’s driver.

So does that suggest the Stealth utilizes carbon rather than the more popular titanium?

You may or may not recall that TaylorMade came up with a very pricey driver for the Japanese market back in 2015 called the Royal Gloire and the royal price tag was around a cool $1,000.  That was a composite face design that targeted mid to slow swing speeds.

Apparently that didn’t go over that well as it never showed up in the U.S. market.

Which brings the question as to whether TaylorMade as finally solved the carbon-face puzzle?

And if it has, what will the price be for Tiger’s Stealth-Plus?

Hopefully if you really want one, you won’t have to go on a payment plan.

Tiger entered the world on December 30, 1975 and at an early age, he was already a sensation.

Fast forward and he’s one of the biggest names in sports and these days, the biggest name in golf, even though he finished second to Phil Mickelson in the Tour’s PIP social media contest.

No Broken Records But Broken Arms For The Coody Twins:

This is one of those “You’d Have To See It To Believe It” happenings.

You may or may not know about the Coody twins — Pierceson and Parker — they are the grandsons of former Masters champion Charlie Coody and they are seniors at the University of Texas, integral players on the UT golf team.

Well, it seems that they were involved in some sort of bizarre foot-race following a team workout at UT’s indoor athletic facility.  It was some sort of relay race and they were on opposite teams, each running the anchor leg, which means someone must think they’re pretty fast.

Well, they were neck-and-neck at the finish line and didn’t slow down fast enough to prevent themselves from crashing into a padded cement wall.

Here’s where it gets weird.

Both broke their right arms, the identical injury — a radial-head fracture just below the right elbow.

Needless to say these promising golfers are going to be out of action for a while.