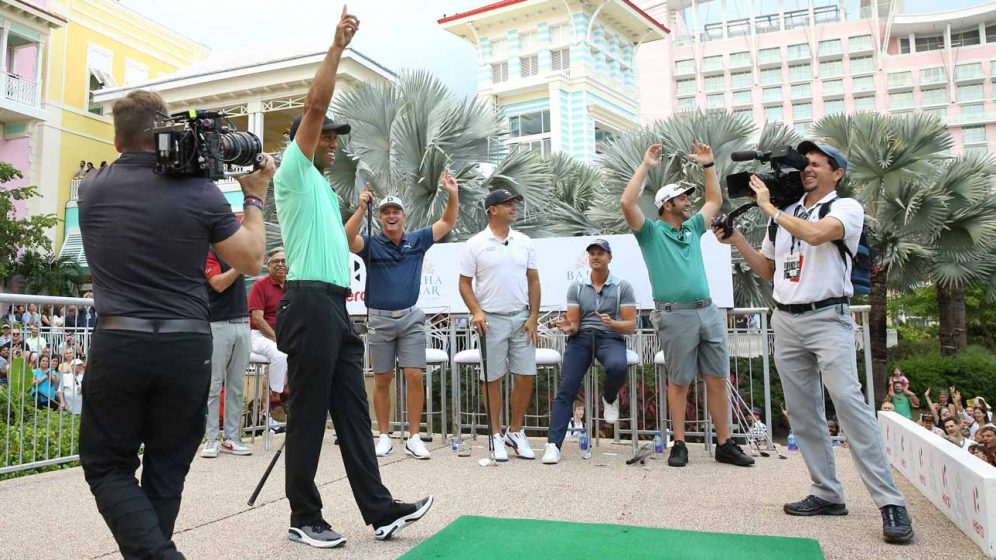 Tiger Woods lets 'em know who's the boss at the Monday challenge.

Tiger Woods: Out Of Hibernation And Back In The Spotlight

It’s a really nice jaunt from Jupiter to Albany in the Bahamas, especially when you own a 155-foot luxury yacht.

Sure, Tiger Woods might have taken  Privacy  down to the site of his Hero World Challenge, or, if he was in a hurry, he could have jumped aboard  Air Eldrick,  his Gulfstream G-700 and gotten there in about 30 minutes.  However he chose to travel, Woods made it safely to Albany and his first order of business was to show Race to Dubai winner Jon Rahm, U.S. Open champ Gary Woodland, major champions Henrik Stenson and Jordan Spieth along with Slow Play champ Bryson DeChambeau exactly who is the boss of them.

Woods got in some practice over at Albany Golf Club, the site of his event which starts today.  He then headed over to the Grand Hyatt Baha Mar.  It’s about 25 minutes away, probably less if you drive a Porsche or Ferrari.  It’s a fancy-schmancy resort — tons of amenities including a really long pool that they call The Reflections Pool.  That’s where Woods and his pigeons, er, fellow competitors would engage in a wedge shot competition.

A bulls-eye type of target was set up in that pool, 132 yards out.  Of course there was a big crowd of resort guests, loud music and no doubt Tiger needling his pigeons, er, opponents.

It was an elimination style competition.  Head-to-head stuff.

Stenson took out Rahm.  That’s understandable.  Rahm’s most likely thinking about his upcoming wedding next week in Bilboa, Spain, where he will tie the knot with his college sweetheart, Kelley Cahill.  But we digress.

Jordy took out Gary and of course, Woods handled the bulked-up Bryson DeChambeau, who has packed on no less than 20 pounds over the past two months thanks to his scientific (I Want To Get Huge) workout routines.

In the three-man round, Stenson was eliminated, leaving Woods and Spieth to duke it out.

Spieth went first and put up 900 points — pretty nice work.  Then it was Tiger’s turn. Tiger tied Jordy with five shots.  His final shot needed to be anywhere on the floating target.  He then did what Tiger Woods does — he nearly holed it.  That was 500 big points and a 1,900 to 800 route.

Don’t mess with the host.

They get down to the real golf today.  Tiger goes off with J.T. (aka Justin Thomas) at 11:35 a.m.  This is an elite 17-player field.  All of the U.S. International team is there with the exception of Dustin Johnson, the knee surgery guy.  A lot of eyes will be on Rickie Fowler, who Woods called on to replace another knee-injury guy — Brooks Koepka.  Rickie hasn’t played much.  He’s been busy.  Got married then battled a honeymoon stomach virus.  Hopefully Rickie’s back to 100 percent.

The favorite over the next four days?

You’d have to figure Rahm.  He just won the DP World Tour Championship in Dubai and The Race To Dubai title.  Hot hand.

But then, there’s always those pre-wedding jitters.

And yes, that guy Eldrick, the host.

Tough to ever go against Tiger.