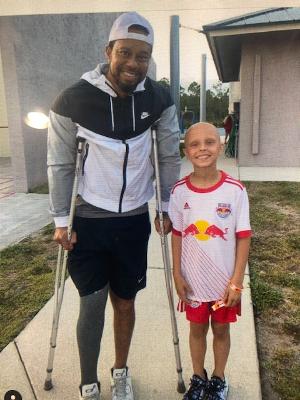 TIger brightened the day for little Luna Perrone, who is battling cancer.

It’s a tough one because Tiger is pretty secretive even when he was full-throttle healthy.

So you can imagine that the powers-that-are at world-famous Golf Digest were wondering the same thing and seeing as how they pay Tiger millions of dollars to be a “Contributing Editor” to the publication, it’s not a reach that someone got on the phone to The Great Stiney (aka Woods agent Mark Steinberg), and said something like:

“Hey Stiney, we pay Tiger millions, can he give us a scoop of sorts with an update on his physical condition?

Well, Stiney obliged and here’s what Golf Digest got from the recovering superstar:

“This has been an entirely different animal,” Woods said of his recovery.  “I understand more of the rehab processes because of my past injuries, but this was more painful than anything I have ever experienced.”

Tiger didn’t go into much depth beyond that but his immediate goal is pretty simple:

“My physical therapy has been keeping me busy. I do my routines every day and am focused on my No. 1 goal right now — walking on my own.  Taking it one step at a time.”

Woods has been out-and-about with his children.  He was photographed a couple of weeks ago sitting in a golf cart watching son Charlie compete in a junior event.

His latest photo came at a youth soccer complex in Palm Beach County.  He posed with 10-year-old Luna Perrone, who is battling Ewing’s Sarcoma, an aggressive bone cancer.  Luna posted the message Tiger gave her:

“I got to have a quick chat with @tigerwoods this weekend when I bumped into him at the soccer fields! He told me to ‘stay strong’ which has always been my goal!  Stay strong physically and mentally and inspire others to do the same! No matter what you are going through.”

In the photo with Luna, you can see Tiger’s right leg is no longer in a splint.  He’s now wearing a full-length compression sleeve on the leg to help with the swelling and it is evident there is still swelling present.  With the lack of activity, his left leg is looking pretty small.

Perhaps Tiger’s meeting with Luna will remind him that there are many whose battles are more serious than his.

You’ll forgive Phil Mickelson if he wasn’t at his best on Thursday at the Colonial Invitational (Charles Schwab).

“I didn’t play well. I shot three-over,” Mickelson said, but them reminded everyone — “But I won the PGA, so…..”

Mickelson described himself as “antsy” and “unsettled” during the opening round. He said he was “trying a little too hard” and couldn’t find the relaxed state of mind that led to his successful week at Kiawah.

Phil had a tough time finding fairways.  He hit only five and hit just nine greens.  “You can’t play this course of the rough because then you have tree trouble, which I had repeatedly, and I didn’t putt well,” said Mickelson added.  “I’ll have some time tonight and tomorrow to get settled in, and hopefully I’ll come back and play a good round. I know even though I didn’t play well today, my game is not far off. I’ve been playing well.”

Jordy’s round was the polar opposite of Phil’s as he clipped Lefty by 10 shots, carding a 63 that gave him a share of the first round lead with Sergio Garcia, who won his first PGA Tour event at Colonial back in 2001.