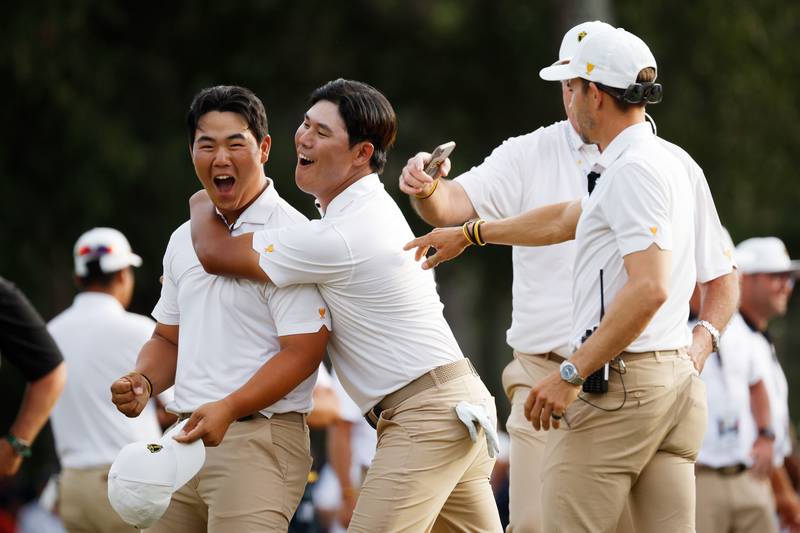 Tom Kim was Mr. Excitement for the Internationals last month.

Perhaps the one memorable moment at the Presidents Cup matches last month came via young Tom Kim when he birdied the final hole in his Saturday afternoon match to beat world No. 1 Scottie Scheffler and partner Sam Burns.

“Mr. Excitement” is back in action this week and Kim is one of the players to watch in this week’s Shriners Children’s Open at TPC Summerlin in Las Vegas.

It’s a big weekend for Vegas with the PGA Tour in town and the college football matchup between Notre Dame and BYU at Allegiant Stadium, home of the Las Vegas Raiders (that sounds so strange).

The golf brings a nice field to Sin City.  World No. 4 Patrick Cantlay is the highest-ranked player in the field.  TPC Summerlin has been good to Cantlay, he had back-to-back runner-up finishes in 2018 and 2019 and was eighth in 2020.

While Kim created some excitement for the International team last month at Quail Hollow, Max Homa re-introduced himself as well.  Homa’s riding a hot streak.  He won the first event of the final wrap-around season at the Fortinet then went 4-0-0 at the Presidents Cup.

Sungjae Im is the defending champion this week.  This week’s winner will need to go low.  Last year, Im won with a 24-under par total.

Another player who should have a big following this week is rookie Taylor Montgomery.  He is from nearby Henderson, Nevada and played his college golf at UNLV.  His father is the general manager of the exclusive Shadow Creek Club in Vegas.

Montgomery finished third at the Fortinet and tied for ninth at the Sanderson Farms championship last week.

The Furyk and Friends event on the Champions Tour has become a popular stop with the season winding down and the chase for the Schwab Cup in full swing.

Twenty-seven of the top 30 in the points standings are on hand starting Friday at the Timuquana Club in Jacksonville.

Paddy Harrington is back in the U.S. after playing in last week’s Alfred Dunhill Links in Scotland.  He heads this week’s field along with the usual big names on the over-50 set — Steve Stricker, Ernie Els and Bernhard Langer.

That wonderful private party at Albany in the Bahamas, better known as the Hero World Challenge, is beginning to take shape.

Tiger’s filled 17 of the 20 spots for his late December event.

Tiger has yet to place his own name in the lineup and his pal Notah Begay reflected that Tiger is still struggling with his surgically-repaired right leg:

“Tiger is just steadily trying to find ways to get a little bit more stability in his leg,’’ Begay said. “It was really presenting some major challenges at St. Andrews. I had a chance to talk to him during the round out there. It’s just constant discomfort. It’s just hard to focus on golf, which is hard enough, much less having to deal with the literal pain of your leg kind of aching throughout the day.  I know as soon as he feels like he can be competitive—I think he got a good sense of what it’s going to take this past year—we’ll see him. We might see him one time this fall. He might surprise everybody.’’