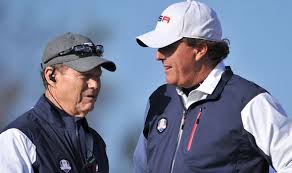 Posted By: Tom Edringtonon: September 28, 2015In: In Other News...No Comments

Tom Watson is in the World Golf Hall of Fame but he said “thanks but no thanks” to the PGA of America officials when they wanted to put him in their Hall of Fame.

Watson turned down the PGA of America due to the way they handled the termination of former PGA President Ted Bishop. Bishop and Watson are good friends and it was Bishop who championed the selection of Watson to lead the 2014 team.

It came to light that there was discord in the American camp during the lopsided loss to Europe last year and it was Phil Mickelson who was the primary disgruntled player on the U.S. team.

Bishop was removed as President of the PGA of America not too long after that when he got into a name-calling twitter battle with Ian Poulter, a player on the European side.

The PGA of America didn’t over-react to Watson’s decline of the honor. The door was left open for his induction down the road when he’s in the frame of mind to accept.