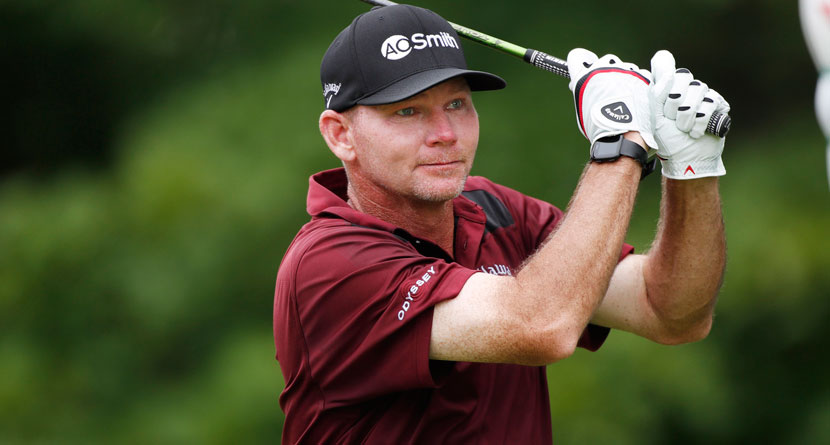 "Two Gloves" got probation, community service and a fine.

Tommy Gainey Takes A Plea Deal — Will The PGA Tour Suspend Him?

You may or may not recall last December when Polk County Sheriff Grady Judd, a total stickler for law and order in his jurisdiction,  put together a sting called “Operation Naughty Santa.”

You may or may not recall that PGA Tour winner Tommy “Two Gloves” Gainey was nabbed in said operation, charged with solicitation of prostitution, a first-degree misdemeanor.

The 44-year-old Gainey won’t be going to trial — “Two Gloves” has copped a plea agreement to keep him out of a possible jail sentence.

And, he’ll also be on probation for the next 11 months.

Gainey won the 2013 RSM Classic but lost his tour card and went to the Korn Ferry Tour where he won the season opener down in the Bahamas.

But the big question now is — will the PGA Tour hold Gainey accountable and punish him under the tour’s Personal Conduct section of the Players Handbook?

At the very least, Gainey should get some sort of suspension.

Inbee Park is the reigning Gold Medalist from the last Olympic Games but she’s in danger of not even making the South Korean team for this year’s games.

She’s trying to do something about that at the Women’s Australian Open.

Park added a 69 on Friday to her opening-day 67 to get to 10-under at the halfway mark at the Royal Adelaide Golf Club.  She’s tied for the lead with first-round leader Jodi Ewart-Shadoff, whose 70 got her to 10-under.

“It was a little bit more calm this morning, so it was nice to play out there,” said Park, who is looking for her first win since the 2018 Bank of Hope Founders Cup. “My putting was consistent, like the last couple of days, so it was good. I just love the golf course and the atmosphere here. So, hopefully I can pull it off on the weekend.”

Park finished in the morning wave and the weather became challenging for Shadoff and the rest of the afternoon players.

“It was a different day today. The wind was obviously a lot stronger, so it was a lot tougher, but I played really steady again,” said Shadoff, who has two career runner-up finishes, including at the 2017 AIG Women’s British Open. “I didn’t get off to the greatest of starts but I managed to fight back.”

The winds gusted to 20 miles per hour with light rain in the afternoon.  It took a toll on defending champion Nelly Korda.  After an opening 69, Korda turned in an even-par 73 and stayed at four-under, tied for 24th.