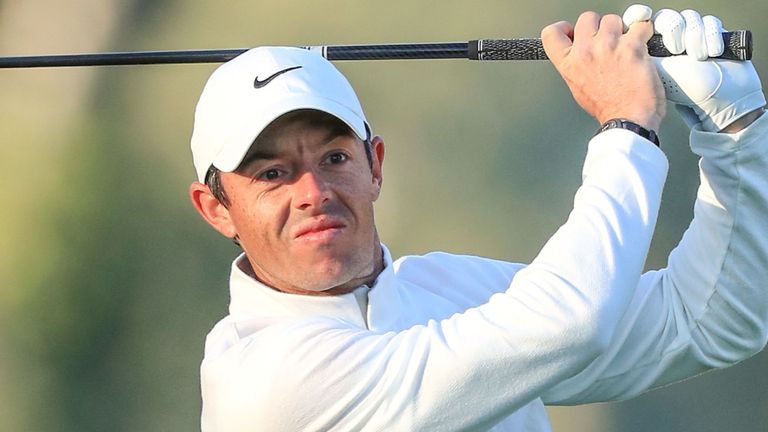 World No. 1 Rory McIlroy helped his cause with a pair of eagles on Thursday.

Rory McIlroy Gets Cold Start, Warm Finish With A 68

February mornings in L.A. can be downright chilly.

Rory McIlroy found that out when he took to the range at Riviera at 6:30 a.m. to get ready for his first round early wave tee time.

“It was cold,” McIlroy said matter-of-factly.  Yeah, around 45 degrees.

He wasn’t sure how far his shots would go, his Trackman on the range helped.

“You try to figure it out on the range,” McIlroy said, “but sometimes it’s better to just eyeball it and sort of hit little shots and dink it around until you have that feeling and that warmth again.”

But on his second hole of the day, the par-5 11th, McIlroy belted a drive and had 278 yards to the flag. Normally, his three-wood will carry 285 yards. McIlroy launched one at the green.  He liked it, he walked after it.  But it fell 30 yards short.  “It went 40 yards shorter than what it usually does,” he said.

A bogey at the difficult 12th, then four straight pars left the world’s No. 1 a distasteful one-over through his first seven holes.

Rory wasted no time making short work of the 10th, the uber-easy par five that plays more like a par four for these guys.  A perfect drive then a precision eight-iron from 177 left him with less than five feet for eagle and he drained that to regain his momentum.  He added a birdie at the fifth and would post a three-under 68.

He’ll look back and know he missed two birdie putts inside five feet that could have delivered a 66.

“After being one-over through seven and shooting three-under, I’m pretty happy,” McIlroy said after his morning was done.  “I think I went through a stretch of missing five greens in a row and my short game saved me.  If the forecast stays the same, this place is going to get pretty fast for the weekend.”

Rory was four back of first round leader Matt Kuchar, who had no bogey issues, shooting a near-perfect 64 thanks to seven birdies on his card.  “To shoot a number like this, you kind of do most things well,” Kuchar said. “I didn’t find myself in much trouble today — I felt like it was just steady golf, a lot of opportunities and I was able to convert on a good number of opportunities today”

Brooks Koepka didn’t do anything special, the now world’s No. 2 turned in a 69 as did defending champion J.B. Holmes.

World No. 2, Jon Rahm’s unexciting 70 left him tied for 33rd.  Dustin Johnson struggled with his driver and finished one-over with 72 as did Phil Mickelson.