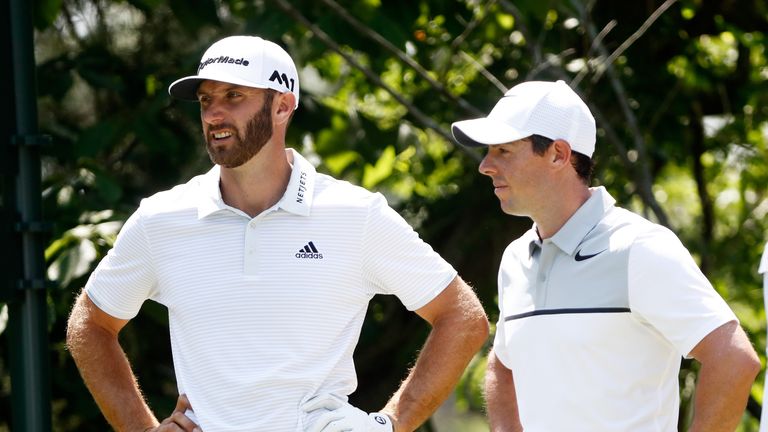 Dustin Johnson, Rory McIlroy and the rest of the world's top players will soon be back in action.

If you’re wondering when you’ll see the big names in the world of golf teeing it up again, just wait a couple of weeks.

Dustin Johnson, Jon Rahm, Justin Thomas, Rory McIlroy and U.S. Open champion Bryson DeChambeau, the world’s top five in order — will be playing at the C.J. Cup on October 15 then the following week at the Zozo Championship, although DeChambeau has yet to commit.

The Shriners Hospitals for Children event comes next week at TPC Summerlin in Las Vegas.  A lot of name players show up for that thanks to the cause.  Kevin Na won the title last year in his hometown.

D.J. and the rest will show up the following week at ritzy Shadow Creek in Vegas, which nailed down the C.J. Cup when it was moved from Jeju Island on the coast of South Korea.

The following week, Tiger Woods joins in the fray at the Zozo, which gives that one another all-star cast.

The CJ Cup and Zozo are limited field events with the world’s top 70 invited to each.  Others scheduled to play the CJ Cup include Jordan Spieth, Justin Rose, Rickie Fowler, Tommy Fleetwood and Ian Pouler.  They all needed sponsor exemptions because they failed to finish in the top 70 in the FedEx Cup.  There is no cut in either event.  The purse for the CJ Cup is $9.75 million, $8 million for the Zozo.

Meanwhile the Shriners field is still to be determined.

One player who won’t be in either Vegas event is Brooks Koepka, who is still sidelined with a bum knee.  He hasn’t played since August 14.

Sebastian Munoz got his breakthrough win on the PGA Tour last year at the Sanderson Farms Championship.

This is the second straight year tournament will offer full FedExCup points to the winner.  The past six champions at the Country Club of Jackson have been first-time Tour winners.

Rookie Of The Year Sungjae Im is back.  He lost in a playoff to Munoz last year.  Scottie Scheffler, who was in the running for Rookie Of The Year, returns to action after having to quarantine as the result of a positive COVID-19 test.

Will Zelatoris from the Korn Ferry Tour will make his third straight start.  After a great showing at the U.S. Open, he tied for eighth last week in Puntacana and earned a spot in this week’s field.

He has 185 FedExCup points, leaving him 103 points away – the equivalent of a two-way tie for fifth – from special temporary membership on the PGA Tour. That would allow him unlimited sponsor exemptions.

He already has an exemption for next week in Las Vegas, which would be nine tournaments over the last 10 weeks, including a draining week at Winged Foot.  ”At this stage of where I’m at, I can’t take a week off,” Zalatoris said. ”Hopefully, we’ll keep on running.”