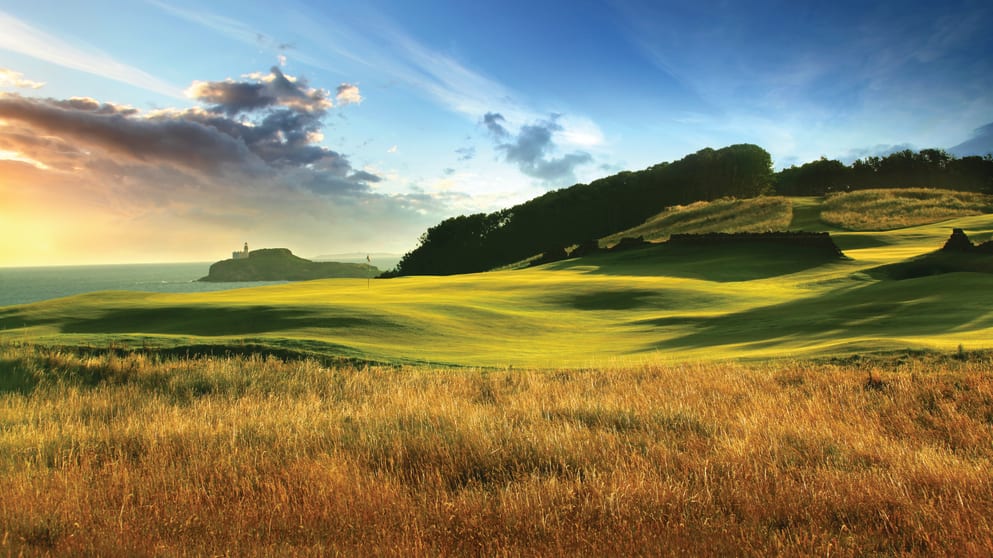 The Renaissance Club is the eastern neighbor of world-famous Muirfield.

Muirfield Golf Club, North Berwich Links, Gullane — the East Lothian region of Scotland is a pretty fancy neighborhood when it comes to links golf, all one need do is look at the three we just mentioned.

Muirfield speaks for itself — home to The Honourable Company Of Edinburgh Golfers.  It’s basically the Augusta National of Scotland and playing there is a bucket list item for anyone who understands and revers the history of the game.

North Berwick West Links is our favorite course in all the world.  The true epitome of a links course, nine out, turn, nine in with the Firth Of Forth there to behold and the Isle Of Firdra there offshore as you make your way in.  Fidra, complete with its lighthouse, is where Robert Louis Stevenson played as a young boy while his father tended to the lighthouse maintenance.  It was Sevenson’s inspiration for Treasure Island, which he wrote at the Hawes Inn in Queensferry just outside Edinburgh.

This week the European Tour is back in the U.K. for the Scottish Open.  It will be played starting Thursday at the Renaissance Club.  Over there, it’s the Re-NAY-sance Club.

Took a lot of gumption and even more money for American businessman Jerry Savardi to try and emulate a links course.  The Renaissance Club is a direct eastern neighbor of Muirfield and is west of North Berwick’s famous West Links.  Some of the caddies at Muirfield don’t think highly of the Renaissance Club, a Tom Doak design.  “It’s sh-a-a-a-t!” one told us the last time we were in the neighborhood and were fortunate enough to play Muirfield.

Factor in the caddie’s thick Scottish brogue and you see they are not high on it.

It is a bit confusing.  There are holes that make you feel like you’re on a Parkland course.  They created some holes on the Firth Of Forth — nine, 10 and 11.

This week’s event is one of those high-prize Rolex Series event, which means there’s a lot more money to be had than the “regular” events on the European Tour.

With that in consideration, they’ve got a much better field than they’ve had in this COVID-affected season.

Bernd Weisberger is the defending champion and you’ve got Tommy Fleetwood showing up along with Ian Poulter, Lee Westwood and Danny Willett.

John Catlin is a name most wouldn’t recognize except for the fact that the previously-anonymous American won two European Tour events in September, including last week’s Irish Open.

Last year Weisberger shot 22-under to win but this year’s layout may look a lot  different.

“It’s definitely going to be more challenging,” said Jerry Savadi, builder/owner/CEO of Renaissance Club.  “When you got into there last year the rough was wide open and trampled, this year it’s going to be rough.  We’ve added some length with four new tees, providing options for the officials at the Tour, who will set up the course. It means they can go back if they need to or they can go forward.  The reason for the rerouting was to try and have the finishing holes out near the water for television. There’s a couple of longer walking distances but it worked well at the Ladies Scottish Open in August so we’re doing it again.”

The Scottish weather may have a say before the week is done.

Thursday and Friday should be fine with highs in the mid-50s and not enough wind to cause concerns.  But on Saturday, there’s a call for 80 percent chance of rain with winds picking to to 20 miles per hour and on Sunday, more rain and more wind.

The Golf Channel will carry the tournament each morning so you can take a visual trip to Scotland.

With all apologies to Sanderson Farms and Jackson, Mississippi, but this week’s choice of European Tour or PGA Tour is a no brainer.

It’s Scotland all the way!