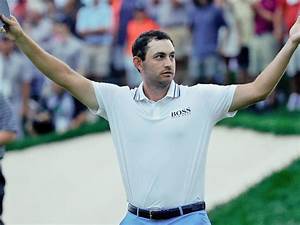 Bryson DeChambeau-defeating Patrick Cantlay will start at 10-under par at East Lake.

Tour Championship, The Fortunate 30: Who Made It, Who Didn’t

It is now on to the PGA Tour’s version of your local Member-Guest tournament where the best guy from the last two weeks is 10-under par before he even hits his opening tee shot at East Lake.

And that would be Bryson DeChambeau-humbling Patrick Cantlay.

Cantlay got the best of Bryson Sunday at the BMW and earned the pole position for Thursday’s start of the Tour Championship.

Tony Finau, with his win at the Northern Trust, starts in the second position at eight-under followed by the golf-ball-bashing, chip-chunking DeChambeau at seven-under.

Early last week when he tied for the first round lead at the BMW, Rahm echoed what is on the minds of most who believe the system is flawed.

“I don’t like it,” Rahm said without hesitation.  “I don’t think it’s fair.  I understand the system, and the way I was told by one of the PGA Tour officials – I’m a Patriots fan, and the Patriots win everything, and get to the Super Bowl and they don’t win the Super Bowl, you don’t win the Lombardi Trophy, right?” said Rahm, who led the The Northern Trust heading into the final 36-holes following a second-round 67. “My answer was, they still finished second. They have to understand golf is a little different.”

Rahm’s point – which, again, has been echoed by many since the Tour transitioned to strokes-based scoring at the Tour Championship – is that the staggered start at East Lake may provide some much-needed clarity and drama, but it’s probably not the best way to crown a season-long champion.

There was a tournament within the tournament on Sunday as players on the bubble struggled to make that top 30, where last place at East Lake is worth $395,000.

K.H. Lee birdied the 17th hole to put himself inside the top 30 but then, inexplicably, with his ball in the 18th fairway, he fanned his second into the creek hazard right of the green and eventualy made bogey and fell to the unlucky 31st position.

Erik van Rooyen has been the instant success story this season.  After winning the Barracuda, he played well and at the Northern Trust, shot a final round 65 that got him to 21-under par, good for solo fifth.  The performance jumped him from 45th all the way up to the 27th spot.

Sergio Garcia, likewise, had a great week.  A closing 69 got him to 20-under, tied for sixth and he went from 44th to 28th.  Rory McIlroy started on the bubble at 28th but shot 65-67 over the weekend and finished solo fourth at 22-under and that took Rory to the 16th spot.

Sungjae Im’s solo third at 23-under jumped him from 25th to 12th while Dustin Johnson was able to improve his spot, going from 22nd to 15th.

Truth be known, given the talent level of the first for players in the standings, it’s hard to imagine one of them not winning the FedEx Cup.

Langer Shoots His Age (64) On His Birthday At Ally Challenge:

The good news for Bernhard Langer is that he shot 64 on his 64th birthday last week at the Ally Challenge.  Bad news is that on Sunday, Joe Durant beat him by a shot to win the tournament at Warwick Hills in Michigan.

Durant won despite a bogey on the 54th hole.  He closed with 68 and shot 17-under par, one better than Langer, who was looking for his 42nd win on the senior circuit.

Burgoon lost his card but his finish will get him back on Tour for next season.  Jaeger already earned his card, finishing in the top 25 for the regular Korn Ferry season.