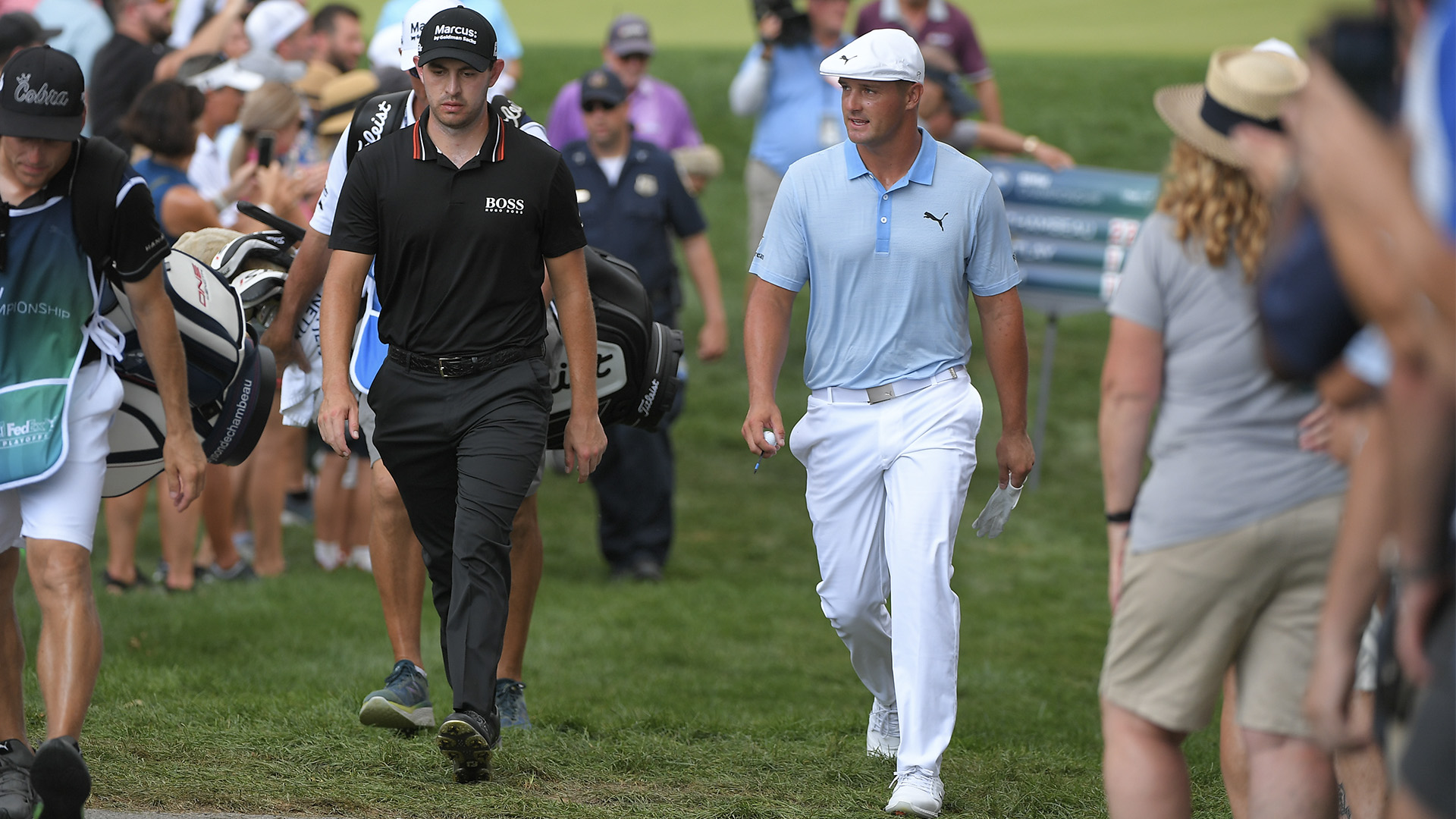 Patrick Cantlay prevailed over Bryson DeChambeau in a classic Sunday duel at the BMW.

What transpired on a tense, raucous Sunday afternoon at the BMW Championship was perhaps the best, most intense head-to-head 18-hole battle this season and it saw poker-face Pat Cantlay defeat agonizing Bryson DeChambeau on the sixth hole of a dramatic, sensational playoff.

There was far more at stake at Caves Valley other than a PGA Tour victory.  No, this was the last playoff event before the Tour Championship and what was at stake for the Cantlay-DeChambeau no-holds barred battle was the top spot and a 10-shot handicap at this week’s Tour Championship.

It was Tradition versus Disruption.  Cantlay has a classic golf swing, one that produces seemingly easy power.  He hits solid iron shots and is perhaps the best putter, still using a traditional type of grip and putting stroke.  DeChambeau uses science and brute force to pound enormous drives but sometimes finds the going tough with a set of irons that are all the same length.  Bryson’s putting technique uses a long putter, fat grip and he anchors the grip into his left forearm — nothing traditional about anything DeChambeau does — his style is disruptive to traditional golf in every facet.

The battle between the two world-class players was epic.  DeChambeau hit it 30 past Cantlay when holes called for a driver leading television analyst and former Tour star Paul Azinger to declare:  “It’s almost alarming how Bryson can overpower a golf course.”

This one even got personal by the 14th hole.  Cantlay, after hitting his approach, was walking up the fairway on the opposite side of the hole from DeChambeau.  DeChambeau stopped after a practice swing and blurted:  “Patrick, can you stop walking.”  Cantlay stopped, as DeChambeau ordered, but then the quiet guy of this pairing ran in a 21-footer for birdie and both walked off the green at 27-under.  At that point, they had wiped out the rest of the field and it was a tense, match-play type of showdown with four holes to play.

Bryson got to 28-under with yet another birdie at the par five 16th to move a shot ahead of Cantlay.  At the 17th, it looked like it was over after DeChambeau found the higher grass short of the fringe and Cantlay’s eight-iron approach on the 186-yard hole bled right, took a bounce right and found the water.  From the drop area, 100 yards out, Cantlay stopped his wedge 10 feet from the hole then watched DeChambeau flub his chip, barely getting it on the green.  Bryson two-putted for bogey then watched Cantlay hole yet another clutch putt to stay a shot back.

Things got even more personal on the 72nd green when Cantlay had the gall to run in another 21-footer for birdie to tie the lead (27-under).  DeChambeau then missed from 14 feet for the win and after just over four hours of butting heads, it was playoff time.

A couple of pars sent the combatants back to the 18th tee for a second playoff hole.  That’s when DeChambeau had a great chance to end it.  Cantlay putted from 54-feet to seven feet and was still outside DeChambeau, who had nearly the exact length as he had on Friday when he was looking for 59.  Cantlay made par then watched DeChambeau once again miss that short putt (six-feet, two-inches) to the left.

Back to 17 and two more pars. Back to 18 where Bryson made his first big mistake of the day — he lost it right and into the creek.  But after a drop that put him in the fairway, he launched his third to four feet.  Two-putt par from Cantlay, miraculous par save by DeChambeau — back to 17.

DeChambeau was feeling pretty good about himself when he hit a perfect wedge to five feet but undaunted, Cantlay’s eight-iron stopped just two feet from the cup.  Two birdies and back to 18 for the sixth playoff hole with daylight fading.  Two more drives in the fairway.  Cantlay’s approach from 187 settled just inside 18 feet below the hole.  DeChambeau’s wedge from 152 was just 10 feet from the cup — but he was left with a tricky downhiller.

It was then that Cantlay scored the knockout blow.  His putt was perfect and found the bottom of the cup.  It ended when DeChambeau’s bid to keep the playoff going missed.

The roars were huge as Cantlay took off his cap and tipped it to the crowd, once, twice, at least three times, it was easy to read his lips as he said “Thank-You” to the thousands.

DeChambeau couldn’t depart fast enough, head down.  No time for a handshake, he probably figured the one after regulation was good enough.  Besides, Bryson isn’t exactly the model sportsman.

Cantlay, who lends new credence to the term “poker face” finally broke out in a huge smile.  “I felt like I just tried to stay in my own little world,” he said, refusing to be intimidated by Bryson’s tee-ball bombs.  “I’m hearing ‘Patty-Ice’ from the crowds all week.  It is great to have the crowds back.”

As for his first-seed at the Tour Championship, Cantlay feels good and he should, he’s the first three-time winner on Tour this season.  “My game feels really good,” he said.

Cantlay showed a new level of grit and determination.  DeChambeau gave him his best and of course there was the 14th hole gamesmanship, or whatever you want to call it.

Not sure how Bryson felt about the loss — it was a bitter defeat.

Has no reason to.