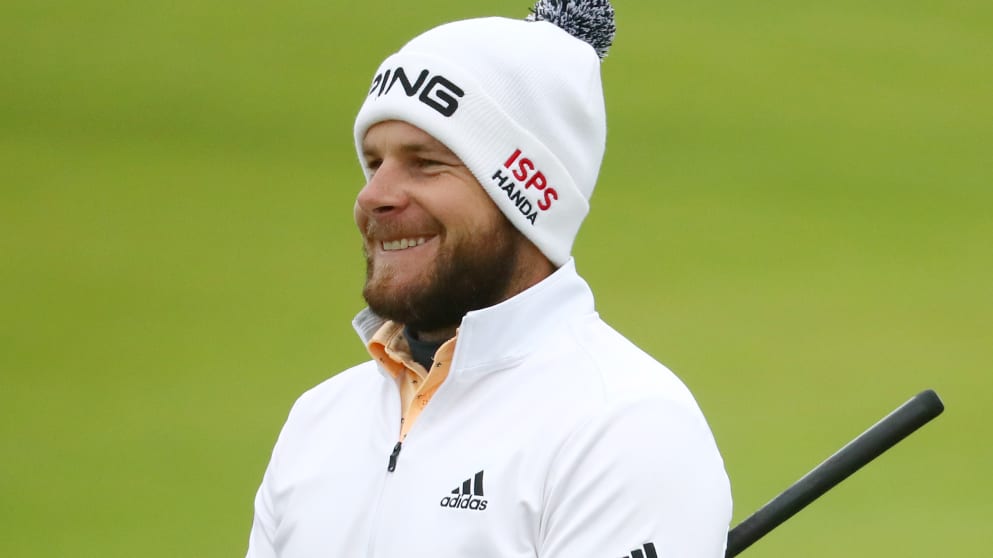 After his Ryder Cup misery, Tyrrell Hatton bounced back in Scotland.

Tyrrell Hatton (64) Comes Back To Life At Dunhill Links

Posted By: Tom Edringtonon: September 30, 2021In: In Other News...No Comments

Tyrrell Hatton was pretty lousy at the Ryder Cup, but then again, so was most of Team Europe with the exception of Jon Rahm and Sergio Garcia.

Hatton went back across the pond and found his groove in Scotland Thursday as he made his way around rugged Carnoustie with an eight-under par 64 that earned him a piece of the first round lead at the Alfred Dunhill Links Championship.

The spectacular Pro-Am format is staged at The Old Course at St. Andrews, Carnoustie and Kingsbarns, a relative infant compared to the two ancient sites.  Professionals play with an amateur partner and the real leader won’t be known until all the pros have completed 54-holes and played at all three links venues.

Hatton was tied with Adri Arnaus of Spain, China’s Haotong Li and Belgium’s Nicolas Colsaerts.  Arnaus shot his round of 64 on the Old Course as did Colsaerts Li played Kingsbarns.  Li was the surprise at the top of the leaderboard as he made only three cuts in his last 13 months on the European Tour.

Hatton is a familiar contender as he won this event in 2016 and 2017.  He got off to a slow start and was only one-under through his first nine holes but he came to life and shot 29 coming home, including an eagle three at the par five 12th.  I didn’t actually realize, I just signed my card then,” he said. “Obviously we needed a big back nine and very happy that the putter worked well and hopefully that continues.  It’s always nice to start pretty good around this golf course. You go to the other ones and feel like you’ve got slightly more of a chance than here so we’ll see what the week brings.”

Troy Merritt was low American in the field with a five-under par 67 at Carnoustie while former FedEx Cup winner Billy Horschel opened with 69 at Kingsbarns.