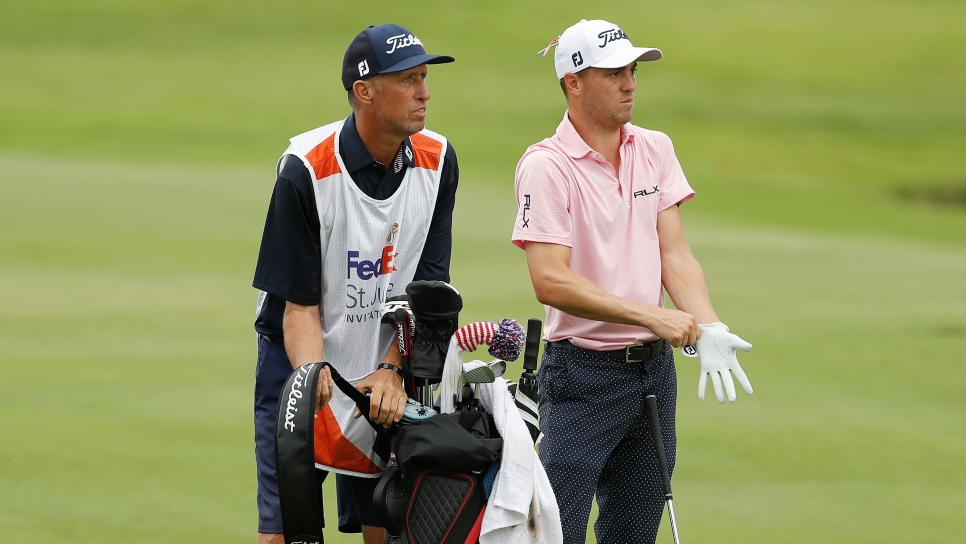 Bones will be back in action full-time for J.T. this coming season.

Jim “Bones” Mackay most likely made a small fortune as the long-time (20 years) caddie for Phil Mickelson.

Bones retired from the caddie ranks after having both knees replaced and has done wonderful television work as an on-course reporter (foot soldier) for NBC and the Golf Channel the past four years.

Then came the phone call from none other than Justin Thomas.

“It came out of left field very recently.  I have just tremendous respect for (J.T.) as a person and a player.  It was an incredible phone call to get, and I said yes,” Mackay said earlier this week.

It must be that time of the year.  After Justin Thomas ended his run with Jimmy Johnson, Bubba Watson went public that Teddy Scott will no longer be on his bag this coming season.

Scott has worked for Watson for 15 years and was on the bag for all of Bubba’s wins, including his two Masters titles.

Bubba wrote this about the big change:

“After 15 incredible years together, Teddy and I have decided to end our on-course partnership. We recently came to the decision after some deep talks, not only about golf but life. When we met I don’t think we ever imagined how much we would experience together. Teddy deserves more credit than anyone can imagine for our success on the golf course, but I am just as grateful for his friendship and the way he has helped me grow as a person.

“@jtedscott thank you for having my back for the last 15 years. It has been a blessing and a privilege to have you by my side. I know you’ll do great things whether it’s coaching, caddying or regaining the World Foosball Champion title. I’m excited to see and support whatever comes next for you my friend.”

A driver change at the Korn Ferry Tour finals helped Sahith Theegala play his way to a PGA Tour card for the 2021-22 season and his driver is still working as the 2020 Haskins Award winner from Pepperdine University opened with a bogey-free eight-under par 64, good for the first round lead at the Sanderson Farms Championship.

Theegala was a shot better than Nick Watney and expectant father Harold Varner III.  Varner led the field at the Country Club of Jackson with nine birdies but a bogey at the par three seventh hole cost him a share of the day one lead.

“I got a new driver after I missed the first cut at Korn Ferry finals, went to Ping, did a little bit of work there and they set me up with a new driver,” Theegala said.  “It’s a longer driver.  I’m like, if I’m going to hit it off line, I might as well hit it a little bit further and funny enough I’m hitting it way straighter.  So that helped a little bit, seeing something new.  Still getting comfortable with the driver, only had it a month now.  But yeah it’s been really nice to see some of the work paying off and being in more fairways.”

It was a perfect day for scoring with little to no wind.  By day’s end, 70 players in the field had posted two-under par (70) or better.  Defending champion Sergio Garcia was one of 21 players shooting 70 along with Will Zalatoris, another pre-tournament favorite.