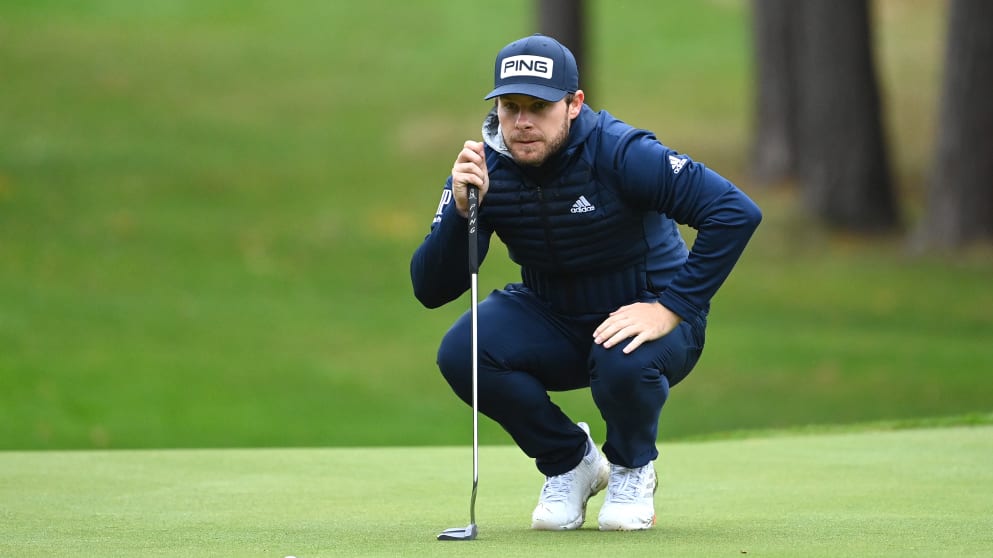 Tyrrell Hatton played with Patrick Reed and cut him by four shots.

The makers of tee times at the BMW PGA Championship had something up their sleeves when they paired Tyrrell Hatton with Patrick Reed for Thursday’s first round at the Wentworth Golf Club.

At the 2018 Ryder Cup outside Paris, Reed and Hatton played each other in the Sunday singles with Reed prevailing, 3-and-2.

On day one of this flagship event on the European Tour, Reed got off to a nice start with three straight birdies to start his round.  But a bogey at the fifth and a double a the eighth brought the former Masters champion back to earth.  Hatton jump-started his day when he pitched in from just left of the green on the par five fifth and he’d make the turn two-under.  On the final nine, he added four more birdies to post 66 and took the lead in the clubhouse while Reed settled for a two-under par 70.

This is a special event for Hatton.  He first came to this event with his father when he was only five-years-old.  “This is a tournament I’ve been coming to since I was five years old,” he said. “To lift the trophy here is a goal of mine in my career and hopefully I can play well the next few days and give myself a chance to do that.  I just feel pretty comfortable out on the golf course. I’ve been around it so many times now, so (it) kind of almost has that home course feel and you just feel like you know it so well.”

By day’s end, Hatton had company at the top of the leaderboard with Spain’s Adri Arnaus and South African Justin Harding joining him from the afternoon wave.

Arnaus finished second three times last season and is looking for his first European Tour victory.  Arnaus was overjoyed with his first ever appearance at Wentworth.

“It’s always good news when you’re not adding any strokes to your scorecard,” he said. “Very, very pleased with how I played. I was very on point from tee, hitting on to the green and then I rolled some putts. So enjoyed it a lot, my first competitive round around here and it was very, very fun.”

Harding acknowledged the stature of this championship after his day’s work.  “I think everyone teeing it up knows the stature of the event and how important it is for the season,” he said. “It’s obviously an opportunity to have all the big guns out and playing and any golfer wants to taste the best out there.  I think the thing that makes me most happy is there were no bogeys. I played good, solid. I had good control of my ball flight and my irons. Just a matter of trying to find a few fairways and see if I can give myself a couple of chances on the greens.”

Overall it was a good day for scoring.  Damp conditions dictated lift-clean-and-place rules in the fairway and the greens were ultra-receptive.

Once again, Tommy Fleetwood’s putting was an issue and the English star could do no better than a one-under par 71.

Friday Update:  Young Matt Fitzpatrick was on his way to setting a 36-hole scoring record but on his final hole, the par four eighth, he pulled his eight-iron second shot into the water hazard left of the green.  His fourth wasn’t close enough and he finished with a double-bogey, the only blemish on his scorecard.  His would-be 63 turned into a seven-under par 65 and he’s in the house with Open champion Shane Lowry at 12-under par through 36-holes.  Lowry shot 65 as well.  Tyrrell Hatton and Patrick Reed were in the afternoon wave.