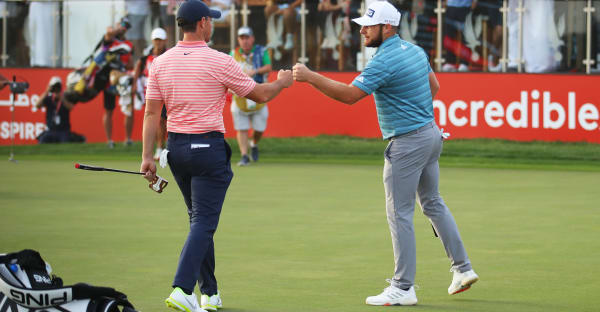 Rory McIlroy, golf’s favorite underachiever looked poised to leave his zero-for-2020 performance behind him as he stepped on to the first tee Sunday at the Abu Dhabi Golf Club.

Rory played well enough for the first 54-holes of the Abu Dhabi HSBC Championship to hold a one-shot lead going into the final 18 but he had that guy staring at him in the final pairing.  That guy being rapidly-rising Tyrrell Hatton, whose stock is soaring these days.  He has three of these big Rolex events on his resume while Rory has none.  The self-deprecating Hatton has won three of his last 19 events, unlike Rory, who got skunked last year.

Hatton is also coming up fast in McIlroy’s rear-view mirror in the world rankings.  Winless-in-2020 Rory has tumbled to sixth while Hatton has become a fixture inside the top 10, checking in at No. 9.  So it made sense that Rory was in for a tussle over the final 18 in the hunt for that sweet Falcon trophy that was waiting for the winner.

After a pair of pars to start, both men traded hit-the-green-in-two and two-putt for birdies at the par five second.  Things went even better for Rory when he holed a really nice 20-footer for birdie at the third to up his lead to two shots — perhaps this would be Rory’s day.

But that notion started to fade immediately at the par three fourth where the pride of Northern Ireland promptly three-putted from 40, hitting an awful second putt from three feet that completely missed any part of the hole.  Oops.  Lead back to one.

At the seventh, Hatton hit a gem of a tee shot on the 194-yarder to within 10 feet.  Rory’s routine par cost him the lead as Hatton calmly sank his putt to square everything at 13-under.

McIlroy committed the ultimate mortal sin for a Sunday contender at the par five eighth.  Rory saw his drive go left and into trouble, his second went too far right into the thick rough.  He made the mistake of coming up short with his third and from the front bunker, hit a really weak sand shot that barley got up to the fringe.  From there he missed and made bogey on a par five.  Hatton missed his birdie putt but still took the lead and he’d never look back.

Hatton threw another birdie at McIlroy at the ninth to make the turn at three under.  He then made it three birdies in a four-hole span with another at the par five 10th to get to 16-under par, looking every bit like a champion.

The two stars traded birdies at the par five 10th but McIlroy took another step backwards with a bogey at 11.  McIlroy never recovered from that.  Hatton had it in cruise control and added another birdie at 13 then another at the 16, where McIlroy made yet another bogey to complete his final round collapse.

By day’s end, Hatton’s 66 was a half-dozen strokes better than McIlroy.  He was 18-under and McIlroy couldn’t even salvage second place as Jason Scrivener’s 66 earned him the runnerup spot at 14-under and Rory finished where he started — 13-under and solo third.

Hatton star is rising, he’s now jumped to fifth in the Official World Golf Rankings while McIlroy continues to fall, dropping to seventh.  Hatton now has four of these Rolex events on his resume, McIlroy has none.

“It’s surreal to be honest,” Hatton said as he prepared to hoist the beautiful silver Falcon trophy.   “Even knocking the putt in on 18 doesn’t seem like I’ve won the tournament but it’s amazing.  I’ve always loved starting my season here in Abu Dhabi and to now add my name on that trophy with so many great champions before me is a huge honor.  It’s massive, Ryder Cup points have started again and that’s a huge goal for me this year, to make that team, so I’m absolutely delighted that I’ve managed to pick up a load of points this week. I’ll enjoy tonight but then my attention will turn to next week.”

Huge performance for Hatton, another chance at victory blown by McIlroy.

Hatton has won a remarkable four of his last 20 events.