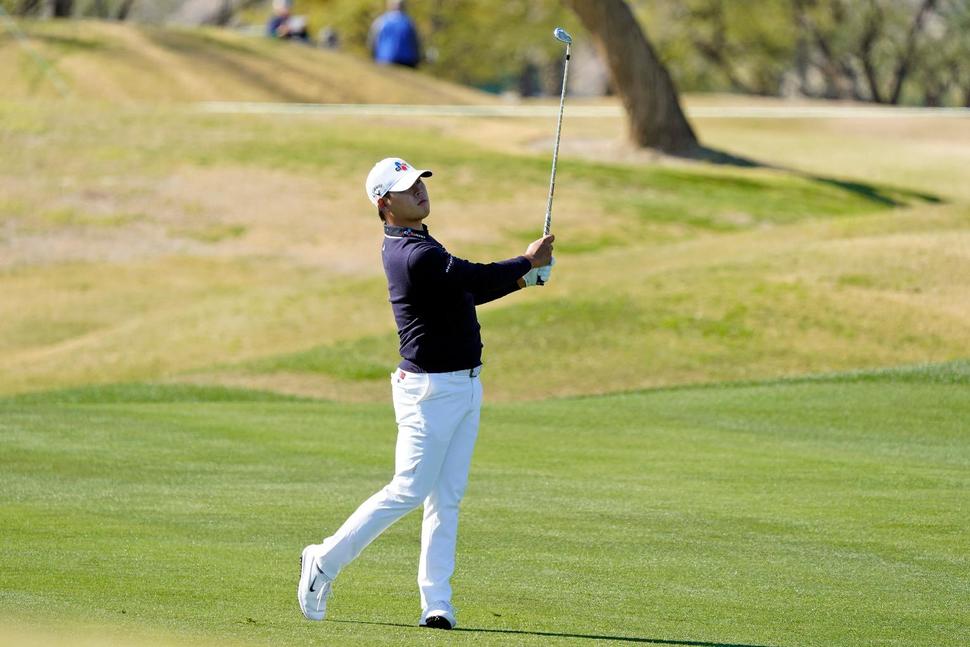 Si Woo Kim, by his own admission, was nervous for most of Sunday afternoon at the American Express Championship.

He didn’t sleep much Saturday night knowing he was in the final group with a swarm of players in striking distance of the championship.

To make things even more tense, six groups ahead, Patrick Cantlay was tearing it up and by the end of his round, fashioned 11 birdies on his way to a marvelous 61 and he was in at 22-under par, waiting to see what would transpire behind him.

Woo was putting together a solid start with four birdies going out then he added two more at 10 and 11 to get to 21-under.  He cooled off a bit and after four straight pars, realized where Cantlay was and what was needed.  Woo hit two good shots at the par five 16th, reached the front of the green and two-putted for birdie to tie Cantlay.  Then at the difficult 17th, surrounded by water, his tee shot settled just inside 19-feet.  Woo then made the most important putt he’s faced in three years.  He hit it perfect, it tracked left-to-right on its way to the hole and fell in the middle.  Woo gave it a big fist pump, realizing what it meant — he was the leader with one hole left.

At 18, he hit a perfect three-wood and a solid second to 20 feet and easily two-putted for par and his first victory since the 2017 Players Championship.  It was a fitting end as this time last year, Woo didn’t make it past the first round of the tournament.  He shot 87 on the Nicklaus course and withdrew with a back injury.

Woo’s road back was helped by his work with Claude Harmon III and his own determination.  “Just kept patient,” Woo said, admitting he had a couple of chances over the past two years but failed to win.  “I can’t sleep last night,” he said.  “Now I’ve got more confidence after this win.”

Those two closing birdies at 16 and 17 helped him overcome Cantlay’s 61 with a 64 of his own and it produced his third PGA Tour victory.

Cantlay played better than anyone over the final 36 holes as he made 20 weekend birdies.

Aussie Cameron Davis took solo third at 20-under while Tony Finau’s quest for a a second Tour win came up short once again.  He shot 68 and finished solo fourth at 19-under par.

At least one player from Northern Ireland knows how to close the deal.

Darren Clarke shot a final round 64 at Hualalai and won the season-opening Mitsubishi Electric Championship on Saturday.  The former Open Champion was a head-spinning 21-under par for just 54 holes.  He made a back-nine run with birdies at 10 and 11, two more at 13 and 14 and another pair at the 16th and 17th holes to finish off a bogey-free round.

He topped Retief Goosen by two shots as Goosen also closed with 64 and was the day one leader with 62.  Jerry Kelly took solo third at 17-under.

”Just to win, to get in the winners and to win again is certainly very gratifying,” Clarke said. ”I love the Champions Tour. The guys have been so good to me out here since I’ve been out here, so welcoming. And the standard is so high, just it’s incredible. The guys really flat out can play. I’ve been fortunate these past couple tournaments.”

Clark’s last outing was at Broken Sound in Boca Raton where he won the TimberTech title.

”I sort of broke through in Boca as you know and I sort of liked the feeling of that, Clarke said. ”But down in Abaco straight after, I couldn’t play Phoenix (the season finale), had to go down to Abaco. Went down there with my group of mates down there, GFY Group. We play all the time. I give them lots of shots and all that sort of stuff and just keeping me competitive. I worked and practiced nearly every day from the break.”