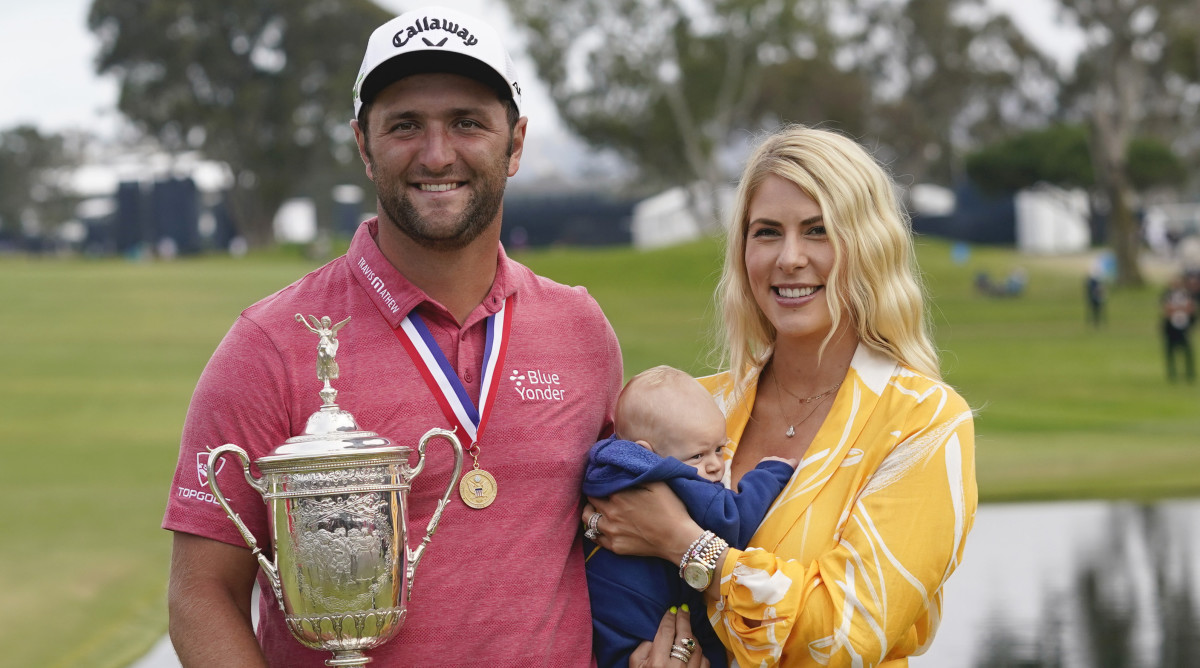 Fatherhood has helped Jon Rahm find inner peace on and off the golf course.

Your 2021 U.S. Open champion is a worthy one — this fatherhood version of Jon Rahm is calmer than he used to be, more composed than he used to be yet that extraordinary skill set of his just keeps getting better.

Looking back at his performance down the stretch last Sunday, he did something no one had done in a U.S. Open — he birdied the last two holes when he NEEDED it to win.

Players have finished birdie-birdie at the U.S. Open but the like of Ben Hogan and Tom Watson were already ahead of the pack when that happened for them.

For Rahm, his curling putt at the 71st hole squared him with Louie Oosthuizen then that ultra-clutch 18-footer (another difficult left-to-righter) at the 72nd hole gave him the lead for the first and only time all week.

Rahm waited it out.  Had to be the longest hour or so of his life as he waited for Oosthuizen to negotiate the last few holes of the trying South Course.  Pulled tee shots at 17 and 18, when the pressure was greatest, cost Louie his shot at a second major.

Rahm rejoiced with his infant son Kepa, wife Kelly along with his parents, in from Spain.  As Jon pointed out at trophy-time — three generations of Rahms standing there.

Jon expounded on the “power of positive thinking” that took him the agony of two weeks ago at The Memorial to the ecstasy of his first major championship.  This version of Jon Rahm showed patience in the face of pressure.

“I felt like a lot of times in majors, I thought I had to play my best every single shot on every single hole.  This time I was accepting pars,” Rahm said, speaking of his new mind-set.

That mindset kept him in the thick of it when some of the world’s best were falling by the wayside.  The list of players who were right there on Sunday was like a Who’s Who of stars.

Former world’s No. 1 (Rahm has jumped into that spot) Dustin Johnson was in the hunt but couldn’t get it done.  Same for Xander Schauffele.  Same for Collin Morikawa.  Matt Wolff came close last year and had a nice run last week but wasn’t a serious threat, same for Scottie Scheffler.  Rory McIlroy was in the thick of it, until he wasn’t.

Bryson DeChambeau was right there, tied for the lead with just eight holes to play but 40 shots later over those final eight holes left the Mad Scientist looking for cover.

You can excuse Mackenzie Hughes and Russell Henley — this was unexplored territory for both.

As for Oosthuizen, he was the most serious threat to Rahm but two pulled drives ended his hopes.

As for Rahm, he’s still trying to process all of it.

“The setback I had two weeks ago was a build-up for this moment,” he said after all the accolades were finished.  “I knew I could be (the winner) after I hit the drive at one and hit the second and made birdie — I knew it.  I knew I could get it done.  I just had to be in contention.  I was calm, just let it come to me.”

As for his performance when the heat was really turned up and others were wilting, Rahm simply said:  “I have that dog in me.”

On Monday, he ascended to his proper place in the world order — No. 1 in the Official World Golf Rankings, ending a long run by D.J. at the top, third longest run behind Tiger Woods and Greg Norman.

“It was absolutely awesome,” said Tim Mickelson, brother/caddie for Phil and Rahm’s college coach at Arizona State.  “It wasn’t a matter of if == but when.”

As for Phil himself, he sat on the range with Mrs. Rahm (Kelly) and baby Kepa, waiting to see what would transpire with Oosthuizen over the final two holes.

“He’s (Jon) a special person,” said Lefty, himself Arizona State’s most accomplished golf alumnus.  “He deserves all the success he’s had.  He has the kindest heart.”

Heart, soul, mind and body and the power of positive thinking all powered Rahm to his first major last Sunday.

It certainly won’t be his last.