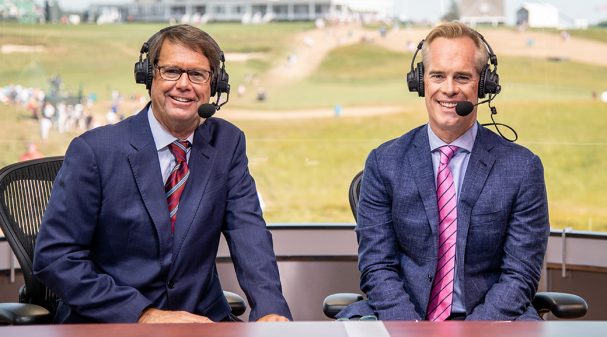 Joe Buck and Paul Azinger will be babbling away at Pebble Beach.

U.S. Open On FOX — Bring In The Clowns

Not only has the USGA botched up the last few U.S. Open venues, it continually reminds us that it sold its soul to the highest television bidder and that would be the anti-Christ of golf broadcasters — FOX Sports.

Once again we’ll have Paul Azinger and Joe Buck mucking up the airwaves.  Sadly, we’ll hear from them way too often this week as they head-up the television coverage by FOX from hallowed Pebble Beach.

Zinger and Buck The Schmuck got a little warmup two weeks ago at the Women’s U.S. Open with Buck making his usual amount of mistakes and Zinger actually telling it like it was when he proclaimed the final round was horrible to watch.

So on to Pebble Beach and while Zinger and Buck try to baffle us with their B.S., FOX will try and make up for its shortcomings by promising to drown us in technology.

Here’s the scoop straight from the PR Geeks at FOX:

“We are planning our most comprehensive and technologically advanced U.S. Open to date, matching the excitement level surrounding the championship being held at iconic Pebble Beach,” said Zac Fields, SVP Graphic Tech & Innovation, FOX Sports. “We’re constantly improving the viewing experience of this great event and the FOX Sports team is excited to offer viewers more dynamic experiences from the golf course than ever before.”

FOX Sports remains at the forefront of ball-tracing technology in 2019, as the network equips the tee box on all 18 holes with Trackman radar technology. Nine holes are equipped to show viewers a standard ball-trace over live video, with enhanced club and ball data. The remaining nine holes will display Emmy-nominated FOX FlightTrack, a live trace over a graphic representation of the golf hole, offering more perspective to the viewer. All 18 holes will have the ability to insert a real-time live carry distance.

Three roaming wireless RF tracers will work to provide ball tracing on approach shots. There will also be FlightTrack for fairways shots on two holes, Nos. 6 and 14. New this year will be a mobile tower camera equipped with Toptracer technology, also positioned on No. 14, allowing for more dynamics within the shot. Unlike most tracer shots, where the camera must remain still, this camera will allow FOX Sports to pan, tilt and zoom to see the ball as it comes towards the camera.

FOX Sports’ image capture continues to evolve at the U.S. Open, with the most 1080p HDR cameras in place for any live event in the U.S. ever, placing over 50 cameras across the course, and in each tower camera and blimp to help capture the stunning beauty of Pebble Beach.

Alongside this technology is the new penalty area camera system, which houses three cameras for over 210 degrees of capture alongside the out of bounds markers at holes Nos. 4 and 5.

As FOX Sports has done since its USGA debut in 2015, live replay coverage of the event continues to capture every camera across the course simultaneously with 178 record channels and 54 playout channels.

A Pebble Beach first, FOX Sports will deploy a live tethered-aerial drone camera to be launched and operated from a boat along the coastline at Pebble Beach, giving the viewer unique live action on the course.

In addition to its television broadcast and featured groups and holes streams, this year FOX Sports introduces a new “USGA Practice Tee” channel, which is focused on the driving range and uses Toptracer Range technology for added insight as players warm up. Fans at Pebble Beach will see players’ shots being traced on LED boards at the range, while the broadcast and all streaming channels will be able to go into greater detail on swing technique, ball flight and more. Streaming feeds are available on FOXSports.com, the FOX Sports App, DirecTV and USGA.org.”

Wow, real live drones.  That oughta go over well with all the dogs romping on the beach that lines the Pebble coastline.

So yes, get ready for a load of technology and a real load from Buck and Azinger.