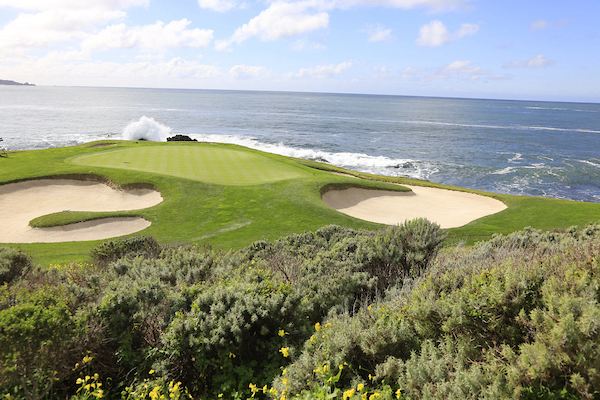 The seventh hole at Pebble Beach is one of the most scenic in the United States.

Good news is that Jim Cantore won’t be showing up at Pebble Beach this week.

No bad weather, no disasters.

The weather can be a bit unpredictable this time of year at Pebble Beach but things are looking pretty darn good for this 119th playing of the U.S. Open

Pretty consistent.  Looks like no rain in store which puts the pressure on the USGA to be sure the speed of the greens does not get away from them.  The wind is the X-factor at Pebble Beach.  If the winds do stay around that 10-11 mph mark, scoring should be pretty good for the guys who are playing well.

But then there is the great equalizer — those nasty Poa Annua greens.

The greens at Pebble Beach are Poa Annua and here’s a primer on the surfaces that will challenge the field this week:

Pebble Beach Golf Links  provides the perfect example of the difficulties golfers face on Poa Annua greens. Pebble Beach’s Poa greens have been both praised and criticized over the years by the pros who play on them. Poa greens tend hold footprints longer and get bumpy as the grass grows later in the day even if they were cut in the morning, critics say. Pros note that keeping putts less than four feet on their intended line can be very difficult.

Golfers who frequently play Poa Annua greens may benefit from developing a short putting stroke with a hard, accelerating hit at the ball. Tiger Woods, who grew up playing on Poa greens, used this type of stroke early in his career. Imparting more energy on the to the ball can help keep it hold the line on bumpy surfaces. Mark O’Meara won five times at Pebble Beach and mastered the surfaces. He learned to make a stroke that hit up slightly on the ball to get it rolling on top of the grass more quickly, rather than bouncing toward the hole.

Golfers who play regularly on Poa greens, and have trouble doing so successfully, might consider using a putter with more loft. On Poa greens, the ball tends to sit in a small indentation among the blades. If your putter has with only two or three degrees loft, you might have trouble lifting it out of that indentation and getting the ball rolling. Your putts are likely to hop and bounce over the first few feet. Champions Tour star Bernhard Langer believes in using a more lofted putter on Poa greens to get the ball out of its indentation and rolling.

Putting those greens late in the day will be more difficult on Thursday and Friday when all 156 players are trampling over them.  After the 36-hole cut, conditions won’t be as tough.

Still, it’s a challenge.  Some will be up for it, some won’t.