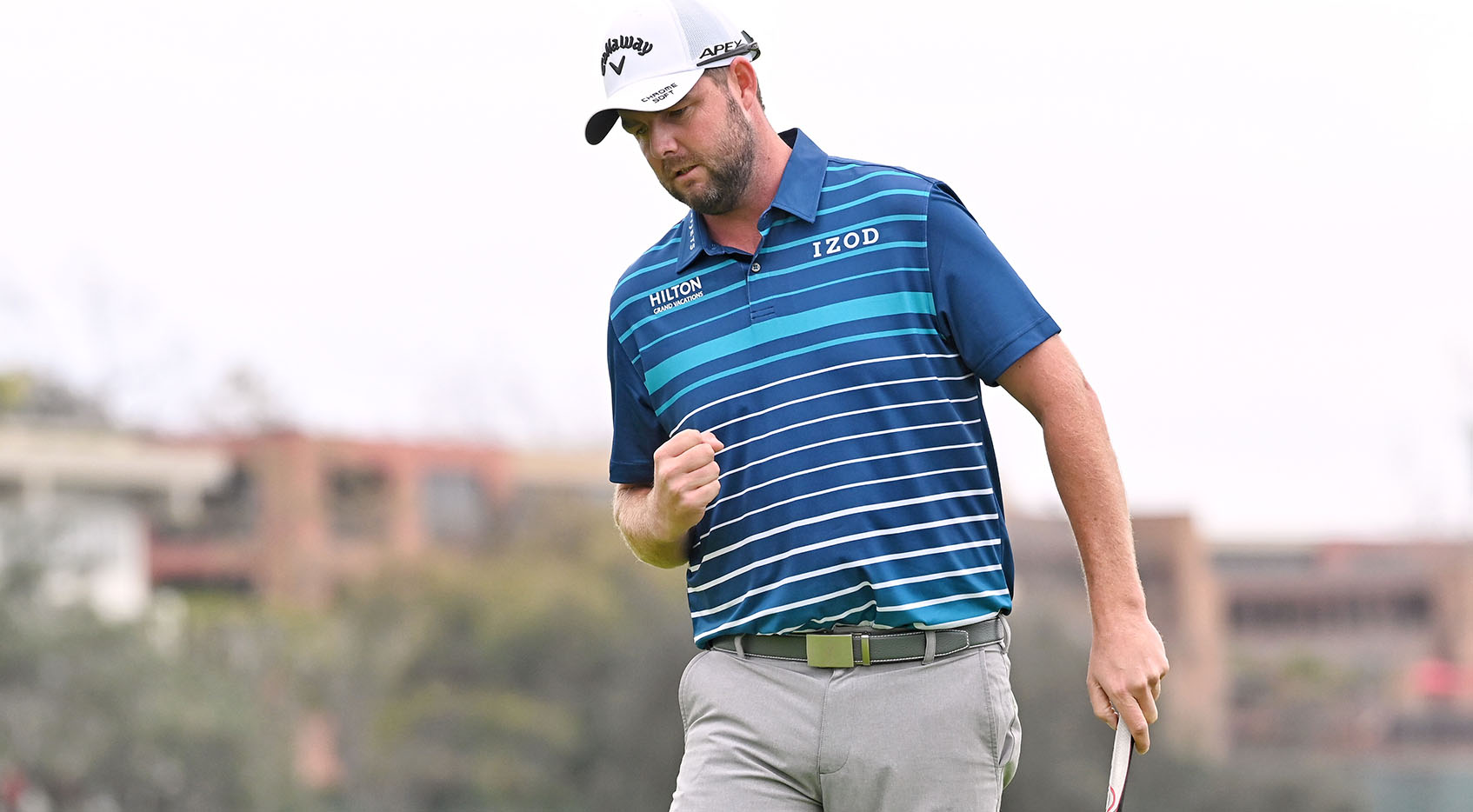 A clutch birdie at 18 for 65 won The Farmers for Aussie Marc Leishman.

Marc Leishman wasn’t even a part of the conversation Sunday when Jon Rahm teed off in search of victory at The Farmers championship.

No, it was Rahm, Rory McIlroy and perhaps, to a lesser degree, Ryan Palmer in the talk of a potential winner at Torrey Pines’ unforgiving South Course.

But then a shocking sequence of events — bogey events — opened the door for Leishman.

Leishman did a pretty good job right out of the box with a pair of birdies then when his putt from inside of five feet at the third lipped out, he was undeterred.  All he did was add three more before the turn at the fourth, sixth and eighth.  He was out in 31,  five-under and suddenly the spotlight was on the 36-year-old Australian.

Behind him there was a incredible triple-collapse taking place that would stun Rahm,  McIlroy and Palmer.

Rahm opened with a bogey then sent himself reeling on the short par three third, a downhill wedge shot for the 54-hole leader.  Rahm pulled his tee shot left into the greenside hazard.  He chopped his way out, barely, then left his third in the long  stuff.  By the time he finished the hole, he had a double-bogey on his card and he fell all the way back to nine-under.

McIlroy was equally bad with bogeys on three of his first four holes.  Palmer joined the bogey club with three his own and he’d get worse on the back nine with four more.  He became a non-factor.

“I can’t really play much worse for the first 10 holes,” Rahm would say at day’s end.

In the meantime, McIlroy came up with a recovery plan — he played the last five holes on the front five-under with three birdies and an eagle at the par five sixth.  Rory turned two-under and was suddenly back in it at minus 12.  But he’d need to keep it up on the back, a tough and daunting task at Torrey.

Up ahead, a couple of birdies from Leishman took to him to 15-under.  He was cruising despite losing drives to the right. His putter more than made up for it.  He put three more pars on the card until another wayward drive at 17 cost him.  He found the front bunker at the par four, blasted to seven feet then missed his only meaningful putt on the back nine.

Behind him, with Rory treading water, it was Rahm’s turn to rally.  He eagled 13 then birdied 14 but hurt himself with a drive in the rough at 15, an approach in the greenside bunker then a poor bunker shot that left him 23 feet for par.  The bogey was a huge setback but he then bounced back with birdies at 16 and 17.

Leishman was done and in at 15-under.  A tester of a six-footer for birdie at 18 would be the difference maker — the winner for Leish.  He posted 67.

When Rahm got to 18, he needed eagle to tie.  Problem is, he didn’t know it.  He thought birdie would get him into a playoff.

“What people probably don’t know is that on 18, after I made that putt on 17, I never looked at the scoreboard, so as far as I was concerned I was one back,” Rahm later revealed. “So with a birdie, I was going to be in a playoff.”

Rahm hit the green in two after a massive drive but found himself just a tad closer from where he made eagle when he won the event in 2017.  He had 53-feet for eagle.  Leishman was hitting wedges in a nearby fairway, staying warm.  Rahm hit a gem of a putt that came close, oh so close but missed by a few inches.  He tapped in to birdie, a 70, 14-under — solo second.

Leishman had his fifth PGA Tour win in hand.

“I didn’t have my best stuff today,” Leishman said.  Surprising considering the result.  The difference maker was his putter.  “Today I putted as good as I probably ever have,” he pointed out.  “This feels pretty amazing — wasn’t expecting this.”