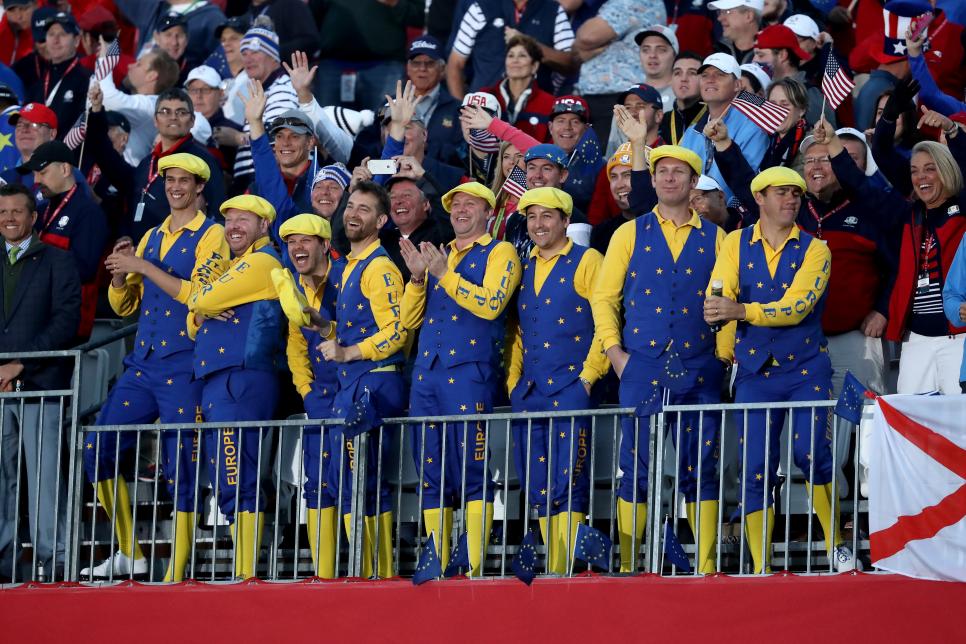 The colorful and dapper "Guardians Of The Cup" won't be there to pull for their guys.

Posted By: Tom Edringtonon: September 23, 2021In: In Other News...No Comments

The United States Ryder Cup team has virtually everything stacked in its favor at the 43rd edition of the iconic matches with Europe.

Home soil advantage has never been so one-sided.  It’s sad to a degree because one of the staples of the matches has been the incredibly organized group of European fans who have dubbed themselves:  The Guardians Of The Cup.  They have custom-made outfits — blue and gold with the Team Europe stars and they’ve been a popular part of the matches both in Europe and the United States.

Unfortunately, COVID traveling restrictions to the United States have put the kabosh on European fans hoping to take in the action at Whistling Straits.  It’s anticipated the crowds will be 98-99 percent USA supporters with a few stray Europeans who now live full-time in the U.S.

Sadly, “The Guardians” will have to sit this one out in their favorite pub back in the U.K.

It was the proper decision to not play these matches as schedule in 2020.  Players were 100 percent in agreement that you cannot have Ryder Cup matches without the fans, who have become an integral part of the action.  This is the loudest and most enthusiastic swarm of golf fans and the format of match play tends to bring out incredible roars at key moments.  Biggest example was the Sunday Singles match in 2016 pitting Rory McIlroy against Patrick Reed.

The Reed-McIlroy match became an instant classic and had the fans whipped into a frenzy.

Whistling Straits is the perfect stage for this weekend’s matches — wind, water, more than 1,000 sand bunkers and the best U.S. team and the most experienced European team in many years should provide a host of memorable moments.

Huge advantage for the U.S.

No excuses this go-round.