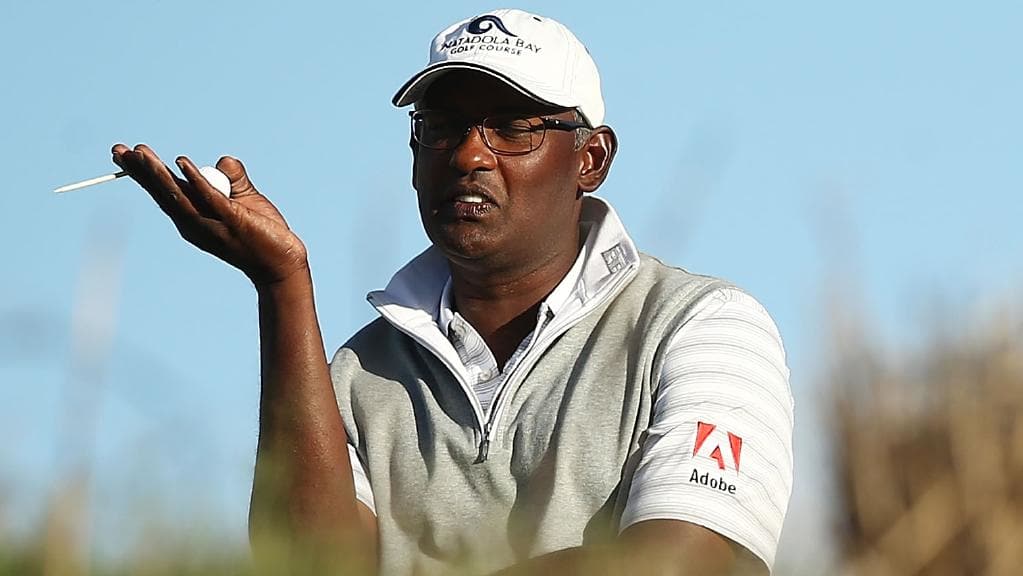 Vijay Singh will selfishly take up a spot in the opening Korn Ferry Tour event.

Vijay Singh Stirs Up A Big Fat Pot Of Controversy

Leave it to Vijay Singh.

Leave it to one of the all-time, least-liked players on the PGA Tour to stir up a big fat pot of golf controversy as we count down the days until the PGA Tour and the Korn Ferry Tour get back in action.

Just in case you missed it, Mr. Deer Antler Spray has made the cut just once in the last nine regular PGA Tour events he has entered.  At age 57, The Veej can pretty much show up when he wants and play.  With 34 tour wins, he has a lifetime exemption.  Apparently The Veej is having a hard time accepting the fact that he’s no longer competitive on the regular tour.  He’s had a sort of condescending attitude toward the Champions Tour.  He pretty much turns up his nose at most of the over-50 events.  He’s still managed to win four, including one Senior major.

So now we have one of the richest folks from Fiji, set to enter the opening Korn Ferry Tour event when that developmental tour restarts next month at the Dye Valley Course at TPC Sawgrass.  Notice we said “developmental” when we mention the Korn Ferry Tour as that it the heart of what it is supposed to be — a place for up-and-comers to try and play their way to a PGA Tour card.

So now comes The Veej with his Hall Of Fame resume — one that includes 34 PGA Tour wins and three majors — the ’98 and ’04 PGA Championships and the 2000 Masters.

So what in the name of performance-enhancing sprays, is The Veej doing stepping foot on a developmental tour?  We’re talking about a guy who has won north of $71 million on the regular tour and has net worth in excess of $75 million.  You could probably buy the Korn Ferry Tour for half of that.

Well, first things first.  Singh has the right to play.  Tour regulations say that if he’s not eligible for a regular tour event — and that would be The Colonial on June 14, Singh can play in the corresponding Korn Ferry event.

Craig Perks, the 2002 Players champion and one of the lead broadcasters for the Korn Ferry Tour’s coverage on The Golf Channel, summed it up best:

“Just because you can, doesn’t mean you should.”

The Stinkin’ Veej has no business playing in the re-start Korn Ferry Tour event other than the fact that he lives a short drive from the TPC Sawgrass complex there in Ponte Vedra Beach.

Korn Ferry Tour player Brady Schnell didn’t mince any words when he took to Twitter and referred to Mr. Deer Antler Spray as “a true piece of trash.”  And if that wasn’t flattering enough for The Veej, he also referred to the big Fijian as “a turd.”  Once he had some time to digest what he said, Schnell pretty much gave it a mea-culpa and backed off his attack on The Veej.

Truth be known, a lot of guys who played around The Veej years ago might totally agree that he’s a turd of a personality.  No doubt about that.

The Veej has never been a favorite up there with The Sheriff Of Nottingham (aka Tour Commish Jay Monahan) and his Sinister Band Of Henchmen.

You might recall that as Singh was approaching his 50th birthday — he said in a Sports Illustrated article at the start of 2013 that he used deer antler spray, which was said to include an insulin-growth factor that was on the tour’s list of banned substances.

Of course The Veej got suspended by then Commissioner Finchem so The Veej quickly used his substantially fat wallet to engage a team of barristers to wage legal war against the PGA Tour.

After five years of litigation and a pile of attorney fees, the lawsuit was settled.  Terms were never disclosed by either side.

Now to further his less-than-spotless reputation, you may or may not know that, early in his career, The Veej got neck-deep in a cheating controversy.

Singh was suspended from the Asian Tour in 1985 over allegations he doctored his scorecard. It was alleged that he lowered his score from one over to one under in order to make a cut, but Singh denied that, saying it should only have resulted in disqualification from the event rather than a ban.  An investigation later proved the alleged violation to be true and John Bender, Asian PGA Tour president, issued Singh a lifetime ban on Asian PGA Tour play.

Which brings us to 2020 and the June 11th Korn Ferry event.  Singh’s name is on the entry list.

He’s playing because he can.

And that pretty much shows us what The Veej is all about.