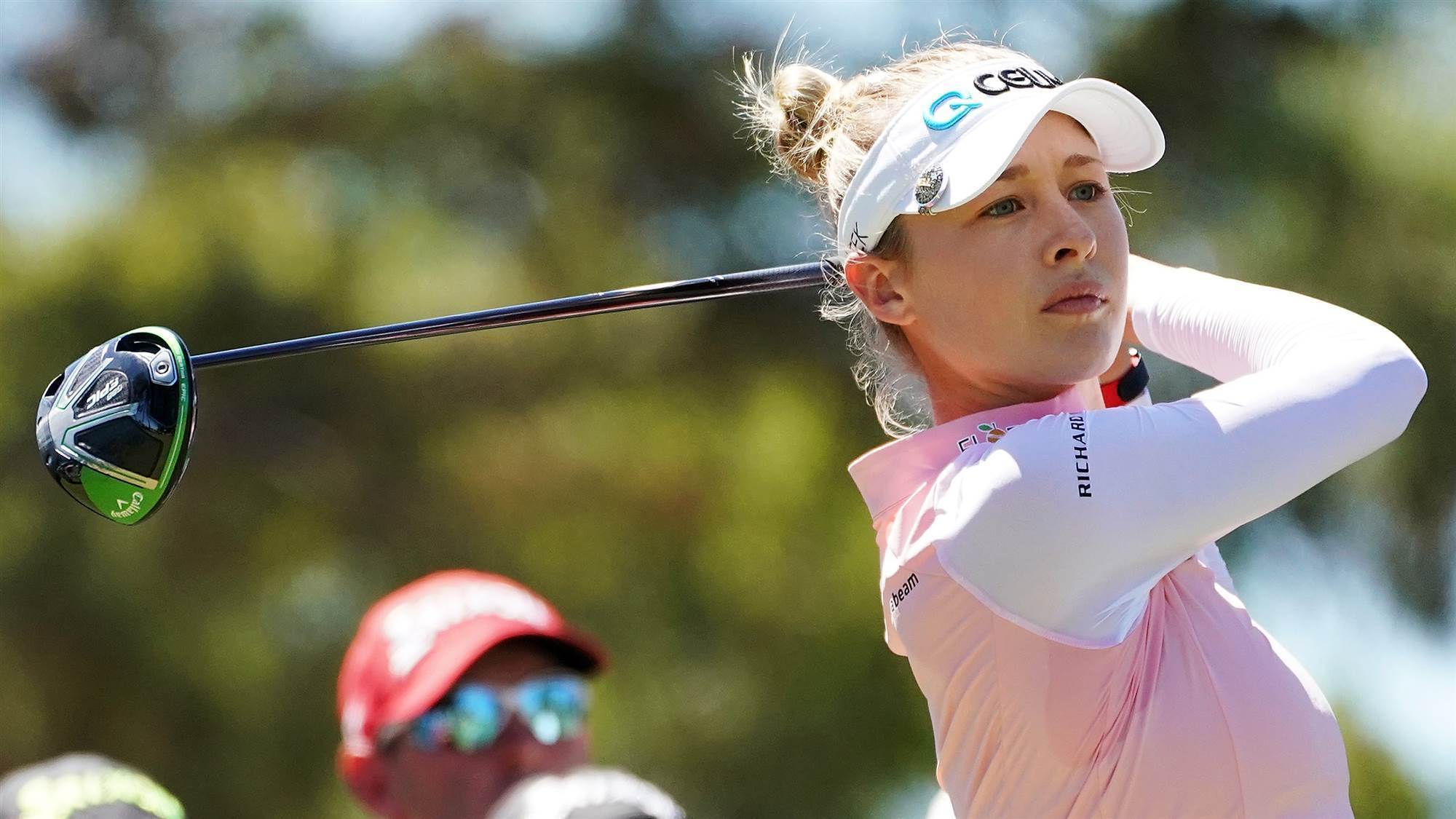 After her opening 74, Nelly Korda may be leaving France early for the Olympics.

A first round 74 probably wasn’t what the world’s No. 1, Nelly Korda, had in mind as she opened play at the Evian Championship on Thursday.

But that’s what Nelly signed for after a day-long struggle at the Evian Golf Resort Course overlooking lovely Lake Geneva.  Korda typically devours the par fives when she plays thanks to her length off the tee but she struggled and played the four par fives in even par.  In all, she had a five-bogey day — something unexpected from the world’s top player.

Her three-over finish left her tied for 99th, eight shots behind co-leaders Yealimi Noh and Pajaree Anannarukarn.  Noh, who is only 19-years-old, is ranked 62nd in the world and came through the 2020 Q-School.  The young American is starting to become a regular at the top of leader-boards and this major is her chance to launch her career to a different level.

Noh’s day began on a high note when she holed her approach at the par four first for a two.  She lost some ground with a bogey at the fourth but bounced back with birdies at the sixth and seventh then added three more on the back nine.

Anannarukarn, the 22-year-old from Thailand, had a bogey-free round — three birdies on each nine.

Things got a bit crowded at five-under par 66 — Ayaka Furue of Japan, American Lauren Stephenson, Atthaya Thitikul of Thailand, South Korean Jeongeun Lee6 and Denmark’s Emily Kristine Pedersen were all sitting a shot behind the leaders.

On Friday, more evidence that the Evian is a suspect as far as majors are concerned.  Former U.S. Open champion Jeongeun Lee6 went out and shot a 10-under par 61 and after an opening 66, she’s at 15-under par and in total control at the midway mark.  Lee6’s 61 is the lowest score ever in a major, if you want to consider this a real major — which it is not.

Players aren’t supposed to shoot 15-under for 36 holes at a true major championship!

The second round news was better for Nelly.  She shot 67, four-under, and is one-under for the championship, tied for 39th and will be around for the weekend.

Darren Clarke Looking For His First Senior Major At Sunningdale:

There’s a second major championship in England — this week’s Senior Open at Sunningdale Golf Club and Darren Clarke is off to a good start, looking for his first major title on the over-50 set.

Sunningdale is a Parkland course, total opposite of the links-style of golf.  It was sunny and green at the tree-lined layout in Berkshire.

Clarke had only one bogey on his card.  He got off to a great start with a front nine 31.  i

“I think you’ve got to respect Sunningdale,” Clarke said. “You’ve got to play smart here. It’s important to hit it on the fairways, that can be any week, but I’ve played here enough to know that there’s certain flags that you go for and there’s certain flags that you don’t go for.  And I played smart around here. I hit away from the flags to the middle of the greens and gave myself some chances, and kept giving myself chances there in the last few holes.  Didn’t make anything at the end but just played smart.  I think the winner is going to have to play smart this week.”

Kingston was a surprise co-leader.  He was recently hospitalized with COVID-19, and admitted he was not able to prepare as he would have lived for the championship.  But after getting out of the hospital, he won the Winston senior event in Germany last week.  “I feel like I’ve been a little unprepared,” Kingston said. “I was down with COVID and in hospital or whatever, so I don’t think my preparation coming into this week is exactly what I would have liked. But when you get to a place like this and you like the golf course, it seems to just sneak into your game, and I love what I see out there.”

Bernhard Langer, who has 11 senior majors to his credit, was a shot back of the leaders.  Jerry Kelly, the points-leader on the Champions Tour, was three-under for the day along with Ernie Els.

Over in Wales, they’re starting day two of the Cazoo Open.  Spain’s Nacho Elvira and Sweden’s Vincent Norrman were the first round co-leaders at Celtic Manor.

The duo opened with seven-under par 64s.  Mikko Korhonen was two shots off the pace with a five-under par 66.