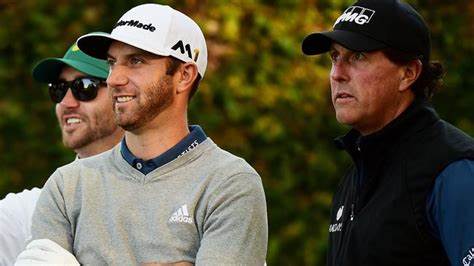 Dustin Johnson's defecting to the LIV, will Phil be joining him?

Now that Dustin Johnson has apparently swallowed the bait, and the bait being a reported $125 million from the Saudis, will Phil Mickelson take the bait?

Repercussions from Johnson’s name appearing on the LIV Series opener in London brought immediate action from one of his main sponsors — RBC (Royal Bank of Canada) has terminated its relationship with him and others may follow RBC’s lead.  That’s what happened to Mickelson when he stepped into the Saudi Quicksand and lost his deals with Work Day, Callaway and KPMG.

RBC also announced that it has ended its relationship with former U.S. Open champion Graeme McDowell.

It’s not like Johnson will be missed on the PGA Tour.  He’s not that popular a figure and has been suspended before by the PGA Tour.  He’s been slipping in the world rankings and failed to win in 2021 and hasn’t done much thus far in 2022.  He was a non-factor at The Masters and missed the cut in the season’s second major — the PGA.

Some reports say that big chunk of change that was thrown at Johnson was actually reserved for Mickelson, who has been a ghost since his role in the formation of the LIV Series came to light in an interview with Alan Shipnuck.    Shipnuck’s new book about Mickelson also revealed gambling losses in the amount of $40 million over a four-year period, evoking the question of how much has Mickelson lost the past 20 years?

Some argue that nothing should happen to Johnson or any PGA Tour member who wants to compete on both tours.  But they fail to realize that although Tour members play as independent contractors, they do sign agreements with the PGA Tour as part of the acceptance of playing privileges.  With those agreements, they sign and acknowledge that they will abide by all the Tour’s rules and regulations and those regulations do not allow Tour players to assume the role of “freelancers.”

Freelancers have the ability to sell their services to anyone who will pay for them.  It’s a totally different designation from independent contractors.

So will he or won’t he?  That’s the question surrounding Mickelson and the LIV Series.

The second and more serious question will be — what sort of punishment will be handed out by the PGA Tour when Johnson actually tees it up in London in seven days.

The University of Texas captured the NCAA men’s golf title Wednesday at Grayhawk with a tense 3-2 win over host team Arizona State.

The Coody twins, Parker and Pierceson both won their matches then Travis Vick parred the 18th hole to deliver the championship with a 2-up win in his match.

“The Match” Was Somewhat Entertaining:

Aaron Rodgers holed a 12-footer to win the latest version of “The Match” for himself and partner Tom Brady as the old guys from the NFC edged the young guys from the AFC — Josh Allen and Patrick Mahomes.

Allen, physically, is huge, a monster compared to the other three.  Mahomes looks like a normal guy, Rodgers a 6-3 athletic guy and Brady a 6-5 slender guy.

None of the four can hit a tight draw off the tee or with any other club for that matter.  There should have been a charity donation for every left-to-right slice.

This match had the banter and mild trash talking that was hoped for in the other ones.

Charles Barkley won’t shut up and is desperately looking for someone that he can beat on the golf course.  Good luck with that Chuck.

Bryant, who once beat Tiger Woods to win the biggest paycheck of his career (2005 Memorial), was killed when a truck slammed into his SUV while he was stopped in a line of vehicles on a Polk City road for a construction crew, authorities said.

In addition to The Memorial, Bryant won the 2004 Texas Open.