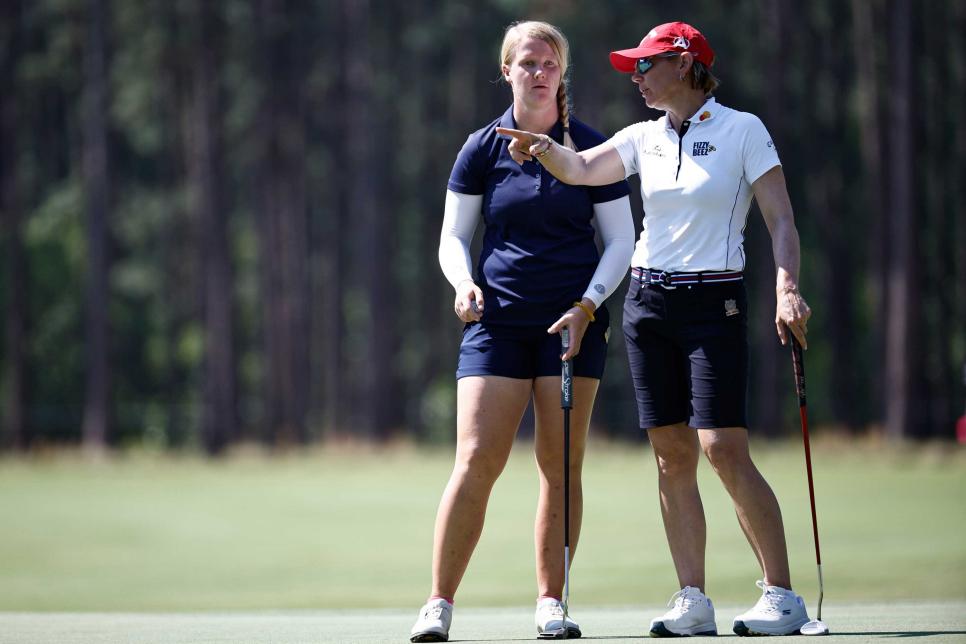 It happens quite often — on day one of a U.S. Open, men’s or women’s, there are typically surprises and things were no different on Thursday at steamy Pine Needles as the Women’s U.S. Open got underway.

First surprise was Mina Harigae, a non-winner on the LPGA Tour.  Harigae put on the day’s best performance.  She birdied two of her final four holes, including a pitch-in from off the green at the tough 16th, and posted a field-leading seven-under par 64.

But that wasn’t the biggest surprise.

That came from 22-year-old amateur Ingrid Lindblad, a sophomore at LSU.  Lindblad played in the morning with her idol, Annika Sorenstam, and all Lindblad did was set a record for lowest score ever in a U.S. Open by a female amateur.  She shot 65 and by day’s end was just a shot behind first round leader Harigae.

Lindblad made it into the field as an alternate from her qualifier in Texas.  She ended up with a somewhat famous caddie as well.  Former LPGA player Sophie Gustafson, a fellow Swede and five-time winner on the LPGA Tour, ended on Lindblad’s bag.

“I’m so impressed by her mental strength, it’s just incredible. She doesn’t get down on herself if she’s hitting off line or misses a putt she’s just like, ‘oh well,’” Gustafson said about the 22-year-old LSU golfer.  “I don’t think I’ve ever seen anything like it.”

Gustafson and Lindblad met for the first time this week. They were connected by the coach for the Swedish National Team when Lindblad needed a last-minute caddie. Gustafson, who has 26 worldwide wins, played in her last major championship in 2014.

The duo proved very effective as Lindblad put seven birdies on her scorecard.

Aside from the surprises at the top, there were a host of name players who got off to good starts and should be in the thick of it come Sunday.

World No. 1 Jin Young Ko shot 69.  No. 2 Nelly Korda made her return after 117 days away from the game and managed to shoot a one-under par 70.  Fourth-ranked Minjee Lee’s 67 put her in good shape.

Lexi Thompson was in position to win this major last year at the Olympic Club but suffered a huge meltdown over the final six holes and shot 41.  She’s hoping to make up for it this go-round and she was solid on Thursday with a three-under par 68.

“It was overall just a very steady day,” said Thompson, who began her round on the ninth hole, which is used as a starting point because of course routing. “A U.S. Women’s Open championship, sometimes you just have to aim away from pins, take your pars, and get off the hole, and it’s all about patience.”

Patience is always a word you hear at a U.S. Open and there was obviously a lot of it going around on Thursday.  A total of 27 players shot under par at Pine Needles and another 20 shot even par.

Veterans Sorenstam and Michelle Wie (West) were not among them.

Overall, Pine Needles just wasn’t that tough on opening day but that should change.

Yes, there’s no wind.  That’s pretty normal for the Sandhills area of North Carolina, where Pine Needles is located.  But the heat, which hit the mid-90s on Thursday, will remain and the greens will get firmer and faster.

And that’s the way the USGA likes it.  And it has a way of separating the pretenders from the contenders.