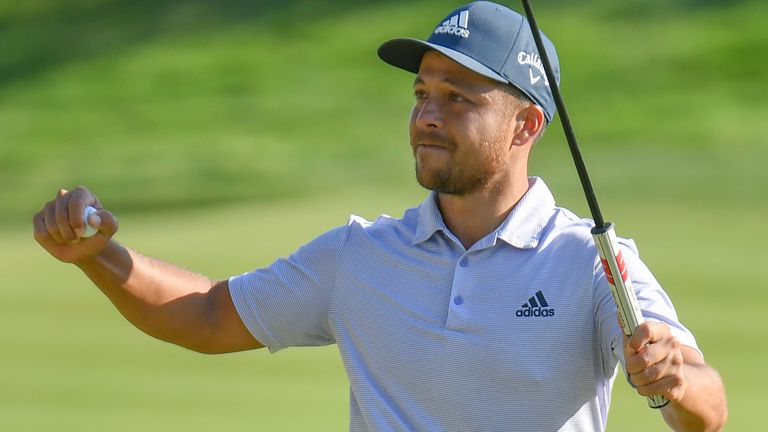 Xander Schauffele got the job done on Sunday with a closing birdie at The Travelers.

It’s been more than 1,000 days since Xander Schauffele won an individual event on the PGA Tour but that drought finally came to an end on Sunday at The Travelers.

Schauffele held the 54-hole lead for the fifth time in his career and he failed to convert the victory on the fourth previous, but this go-round he got it done with some of his own heroics and a little help from rookie Sahith Theegala.

The final 18 was supposed to be a mano-a-mano between Schauffele and playing partner Patrick Cantlay.  The two combined for the team win earlier this season in New Orleans.  But Cantlay had one of his worst showing ever as a member of the final twosome.  Five front-nine bogeys took Cantlay out of the mix, his back nine was even worse and he basically left the door open for someone else to challenge Schauffele down the stretch at the TPC River Highlands.

And that someone was rookie Sahith Theegala.  Schauffele wasn’t exactly tearing it up the way he did the first two rounds (63-63).  He was one-under at the turn and in the lead at 18-under but that’s where he stayed for eight of his final nine holes.  Theegala, playing in the group ahead, drove the green at the short 15th and holed a four-footer for birdie to tie Schauffele.  Then at the 17th, Theegala’s drive found a fairway divot.  It didn’t stop the talented rookie — he hit his approach to 11 feet and drained the birdie putt to take the lead at 19-under, heading to the home hole.

Schauffele was still at 18 under when he watched Theegala blow it on 18.  He pulled his drive into a fairway bunker left and was close to the lip.

Theegala described what happened next:  “Somehow my body just, I just straight bladed it,” he said. “I had room there. I don’t know how it looked, but I had room there. Just didn’t think I would let myself blade it. But I guess the moment was — and then from there it’s, like, got to try and make five now.  His fourth left him with an 12-footer for bogey and it lipped out — the double dropped him back to 17-under.  “I did everything I thought I had to do and it just happened to be everything bad culminated on one hole,” he said. “I did so much good.”

“I thought I was going to have to make birdie to tie,” Schauffele said.  “Then I saw his (Theegala) hiccup in the bunker.”

Schauffele gave some relief to Theegala with a huge drive and a lob wedge to three feet.  His birdie putt gave him 68 for the day and a 19-under winning total.

Michael Thorbjornsen the amateur from Wellesley, Mass., shot 66-66 over the weekend and the Stanford star finished solo fourth at 15-under par.

“I felt really good and comfortable out there, then near the end had a couple of hiccups, which happens sometimes,” said Thorbjornsen, who added that he plans to return to college in the fall. “I don’t think I was too nervous, just a couple of miss-executions.”

A month ago Pierceson Coody helped his University of Texas team win the NCAA championship, on Sunday, he scored his first professional win at the Korn Ferry stop in Maine.

Coody shot rounds of 69-62-67-66 and his 20-under par total was five better than runner-up Jacob Bergeron at the Live and Work in Maine Open.

It was Coody’s fourth start as a pro.  He was No. 1 on the PGA Tour’s University standings and last week turned down a lucrative offer to join the LIV exhibition series.

Things haven’t gone well for Matt Wolff on the PGA Tour for the past year and a half.  He’s missed seven of 12 cuts, has fallen fell from 30th to 77th in the world rankings and has battled mental health issues.

All of the above made him a perfect target from Greg Norman and the LIV exhibition series.

Wolff, obviously doubting his future on the PGA Tour, took the money and ran and will appear at the next LIV event outside Portland.

One other outlier and an amateur joined Wolff.  Carlos Ortiz, ranked 119th in the world, threw his cap in with the LIV exhibition as did Oklahoma State junior Eugenio Chararra.