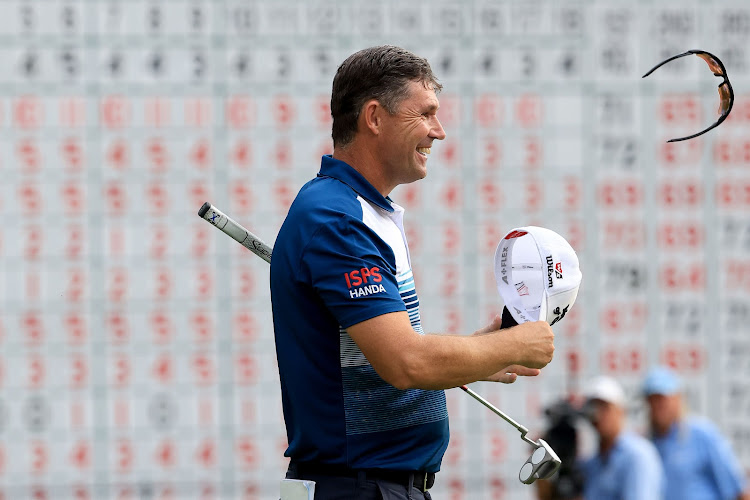 Paddy Harrington prevailed in the battle of Ryder Cup captains.

Sunday at Saucon Valley was supposed to be all Paddy Harrington all afternoon but Steve Stricker had other ideas at the U.S. Senior Open.

Harrington, who entered the final round 11-under par after rounds of 65-66 on Friday and Saturday, looked to be totally in control of his game and the tournament.

He was still 11-under at the turn, up ahead, Steve Stricker, who was the winning Ryder Cup captain last year, was making a move.  Harrington gave Stricker a lot to play for with bogeys at 10 and 11 to start his final nine.

Stricker made his run up the leader-board with birdies at 12, 14 then put the pressure on Harrington by finishing birdie-birdie.  Stricker’s six-under par 65 was the day’s best round and he was in the clubhouse at nine-under.

Harrington put himself back in front with an unlikely birdie at the short par four 15th.  He short-sided himself and his pitch ended up 30 feet past the hole.  He ran in that unlikely birdie then put himself in full grind mode and carved out three tough pars to win it.  He pulled off a very tough two-putt for par at the 16th and another from 50 feet below the hole at the par three 17th.

A great drive made for an easy par for the win.

Harrington became the third straight player to win the U.S. Senior Open on his first try, following Stricker in 2019 and Furyk last year.

“It’s tough to lead from the front,” Harrington said. “It’s even tougher when it’s Steve Stricker behind you. He tends to have one on me. I’m happy enough to get it done in the end.”

As for Stricker, he gave it a champion’s run.  “I tried to birdie them all coming in,” he said. “I had a couple of putts I wish I could have over.”

Haotong Li hadn’t won on the DP World Tour in four years and at one point, considered retirement from professional golf.

But his decision to keep playing finally paid off Sunday with an improbable playoff win over Thomas Pieters at the BMW International.

Pieters birdied two of his final three holes to tie Lie at 22-under after 72 holes.

On the first playoff hole, it looked like Li’s winless streak would continue.  Pieters had a 10-footer for birdie and Li had just thinned his third shot from just off the green and it raced 35 feet past the hole.  Li made the miracle birdie putt but said he had a feeling he would.

“Somehow I thought that I would make that putt (in the play-off). I don’t know how I made that stroke, how the ball went in the hole, because at the end of the day the greens were very bumpy. You just never know,” Li said afterward.

“No-one knows how much I have gone through over the last couple of years. Ten months ago I nearly decided to not play golf. I thought I couldn’t play golf again.  “Ten months later, right now, holding a trophy. If someone told me ten months ago I would win again, I wouldn’t believe that.  Thomas (Pieters) played great all day. My putter wasn’t as hot as yesterday. Golf, this is golf.  Sometimes things go your way, sometimes not. I’m just so happy to finish on 18 like that,” Li said.

Li was an emotional wreck after he won.  He cried, he knelt down and put his head on the green, sobbing openly.

Things can happen like that when it’s been four years.

Golf And Baseball: Why Everyone Loves The Long Ball

Locals Not Happy About LIV Exhibition At Pumpkin Ridge