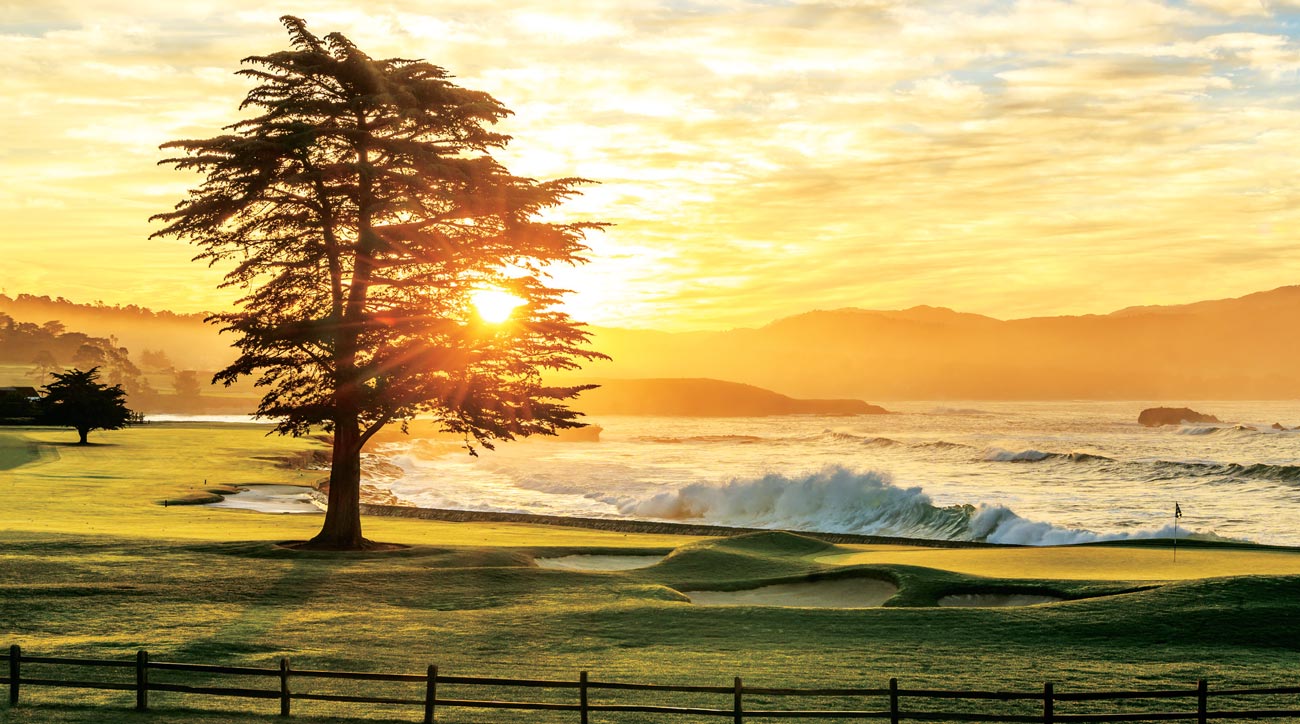 Sunset at the 18th is purely majestic at Pebble Beach.

“I’ve said many times before that Pebble Beach is a wonderful thinking-man’s golf course. That is why it is such a great U.S. Open venue.”   — Jack Nicklaus

Now that Jack has made things perfectly clear about this marvelous venue for the 119th playing of the United States Open Championship, shall we get right to today’s task at hand?

In the inexact science of predicting who may or may not win a major championship, we find ourselves with the serious task of taking a look at who may or may not contend this week at glorious Pebble Beach.  If St. Andrews is the Home Of Golf, then Pebble Beach could certainly qualify as the home of American golf.  It is visually spectacular, has iconic holes that are etched into everyone’s memory banks and this week promises yet another chapter in the history of major championship golf.

Rory McIlroy:  How impressive was Rory last week in Canada?  Has he solved the DaVinci Code of short wedge play that has plagued him throughout his career.  Has he shed the putting woes that have plagued him at Augusta National and other major venues?   Rory certainly gave us more answers than questions at the Canadian Open.  No one has more momentum coming into Pebble Beach than the four-time major champion from Northern Ireland.  Rory was no where to be seen when we made our Masters and PGA picks this season.  But now that he has added four wedges to his bag and add the fact that he put in two intensive days of work at Muirfield Village, a lot of it on his short game, well, it would be surprising if he wasn’t in the hunt this week.  He handled the Poa Annua greens at Hamilton Golf Club quite nicely.  Sooooo, we’ll jump on the bandwagon and make Rory our man this week.

Tiger Woods:  If you look at the Jack Nicklaus quote at the top, the man who immediately comes to mind is the guy who blew everyone off the Monterrey Peninsula 19 years ago here at Pebble.  Tiger got in some work the week before The Memorial and was at Pebble on Sunday to start his final onsite prep work.  Small greens at Pebble Beach favor the accurate iron player and Eldrick T. Woods is as accurate as they come.  It will all come down to his putting on the Poa Annua greens.

Brooks Koepka:  Not convinced that Koepka has enough Pebble Beach experience. He’s only played here once in competition and last week he looked a bit befuddled by the greens at Hamilton.  His tie for 50th wasn’t as impressive as his pre-PGA work at the Bryon Nelson.  Really, really tough to not make Koepka the man to beat.  We picked him to win the PGA and he’s gone back-to-back in this championship.  Back-to-back-to-back is another story.

Dustin Johnson:  Hard to imagine D.J. flying under the radar but he is.  He’s been right there at the first two majors this season, finishing second at both the Masters and PGA.  Wouldn’t be the least bit surprising to see him right there come Sunday.

Patrick Cantlay:   Here’s our surprise among the favorites.  This kid was quite impressive two weeks ago when he won Jack’s tournament.  Jack was gushing over Patrick and Cantlay puts on his game face and goes about his business without much color or flair.  He’s a California guy so he has experience with what Pebble Beach will offer this week.  Too good to be a dark-horse.

Jordan Spieth:  After a long and serious slump, Spieth is finding his way back.  He’s had three straight top 10s and although we don’t see him winning this week, we expect him to play well enough to get in the hunt.  The small greens may present a problem for Jordy as he’s had a habit of producing wayward iron shots at the wrong time.  His putting is coming around nicely.  He’ll need to drive it in play to have a chance.  Experience counts and he’s got that.

Francesco Molinari:  What he lacks in length off the tee, he makes up for with game management and a good short game.  Frankie’s iron shots are good enough to make him a factor this week.  What he doesn’t have is a lot of experience on Poa Annua greens.  What might make up for that is his experience on the European Tour where the greens aren’t as perfect week-in and week-out as they are over here.  If he’s putter’s working, he’ll be heard from at Pebble.

Justin Rose:  His only major is a U.S. Open so he knows what it takes to win a USGA event.  His game hasn’t been all that great this season and his putter may be a bit suspect to expect a lot out of him this week.  Still, hard to argue against the talent level he brings.

Tommy Fleetwood:  Pebble Beach is perfect for Tommy.  Not too long.  Wouldn’t be surprising to see the guy with the rock-star hair in contention this week.

THE NEXT TIER DOWN:

Justin Thomas:  Not sure he’s had enough time back after the wrist injury.

Tony Finau:   He’s been in a bit of a slump but he shows up at major championships.  Has switched to a claw putting grip and maybe that works well for him this week.

Jon Rahm:  Has a lot to prove and this is a good place to prove it.

Xander Schauffele:  Where’s the X-man been?  His game’s been off but maybe this is the week it goes back on.

Rickie Fowler:  Just not sure about Rickie.  You can trust him to hang around, but can you trust him to actually get in the thick of it on Sunday at a major?

Graeme McDowell:  How great would it be to see G-Mac play well here?  He won here nine years ago and became the first European to win the U.S. Open since Tony Jacklin in 1970.  G-Mac comes in on a high, as he qualified for the Open Championship at Royal Portrush with a huge putt on the final hole Sunday in Canada.

Adam Scott:  Adam Scott’s ball-striking is certainly good enough to win this week.  His putting is not.  Needs a miracle with that gosh-awful broomstick he still uses.

Matt Kuchar:  If we hear one more “Kooooooch” cry from the galleries……they should be chanting “Scroooooooooge.”

There you have it. A lot of food for thought.  A lot of talent to choose from.

The U.S. Open is the most democratic of all the majors and you’ll see more players this week you’ve never head of.  Some may even be atop the early leaderboards.

One thing for sure, it will take great play from a great players to win this week.