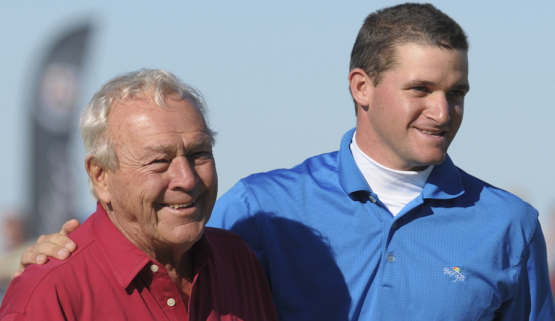 Arnold Palmer was a huge supporter of the USGA.

He was their spokesman for many years, urging all of us to become USGA “Associates” with him.  Best spokesman ever, back in the days before the USGA started screwing up the U.S.  Open setups.

Palmer was part of the group that took Pebble Beach back from the hands of Japanese investors back in 1999.

Clint Eastwood and Peter Ueberroth were part of the group along with the GE Pension Trust.  They formed the Pebble Beach Sports Group.

Marvin Davis sold the courses and assets back in 1990 to Japanese big-wig Minoru Isutani for a reported $850 million.  Isutani wanted to sell memberships for $740,000 each but the State Coastal Commission put the kabosh on that scheme.  Isutani then sold it all at a loss of $350 million to Lone Cypress Company, a Japanese partnership of Taiheiyo Club and Sumitomo Credit Services.

Palmer’s Group got it back for $820 million.  America’s golf treasure was back in American hands.

Palmer was honored Thursday morning by the USGA when his grandson, Sam Saunders, was the first man to tee off to open play at this 119th U.S. Open.

“To have the USGA put that much thought into it and there’s a reason they put me off first, I am incredibly flattered and very touched by it,” said Saunders, who qualified for the championship by finishing third in sectional qualifying in Columbus, Ohio. “To hit the first tee shot is exciting, but hopefully I go out there and put up a good score and put myself in contention and be on the leader board from the very beginning to the end.”

Sam didn’t come close to leading.  He put up a one-over par 72 that had him tied for 58th on a day when Pebble Beach was giving up birdies willingly.