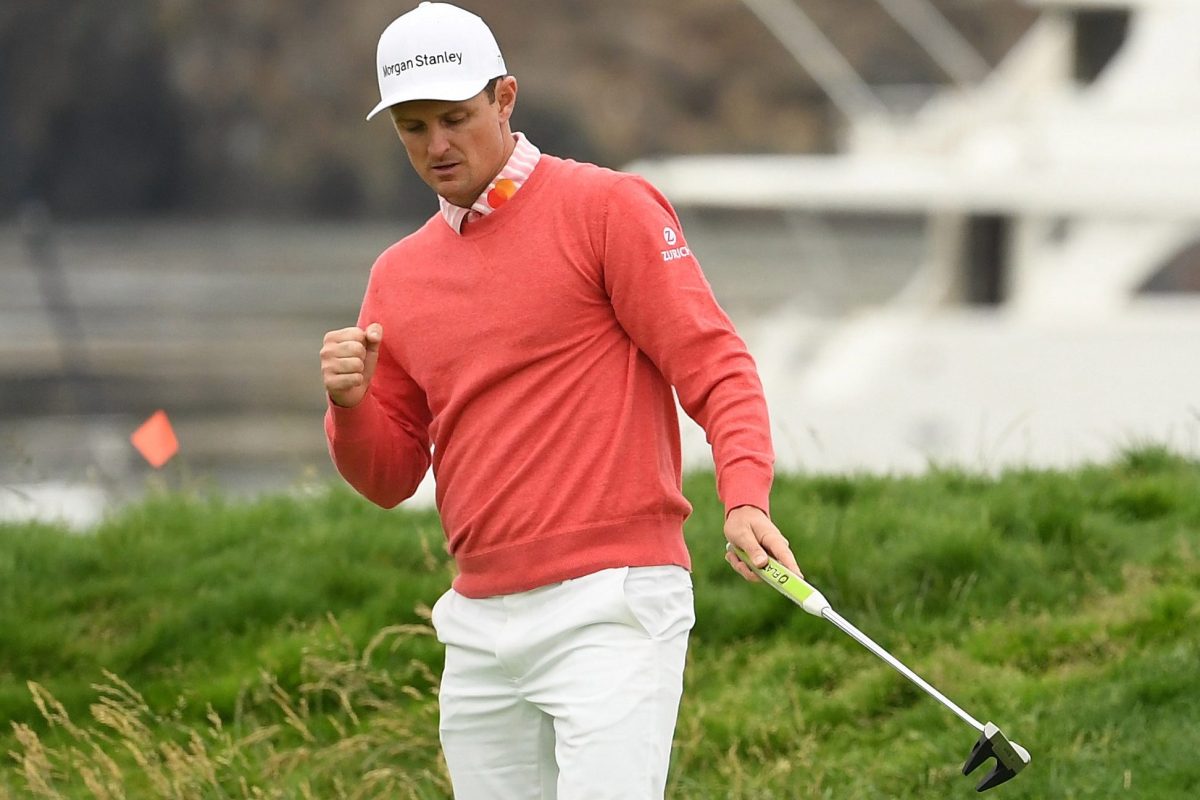 Justin Rose used his putter just 22 times on his way to 65 and the day one lead.

If you have taken in enough U.S. Opens, you know that first rounds are basically right in the Forrest Gump wheelhouse.  You can change his quote to say:  “U.S. Open first rounds are like a box of chocolates — you never know what you’re gonna get.”

What we got on a calm, moist Thursday at Pebble Beach, the first round of the 119th U.S. Open was total scoring opportunity.  What you had by day’s end was a potpourri of a leaderboard with an assortment of chocolates up there, so to speak.  There was quality and quantity on a day when birdies were there to be had, eagles showed up in double figures and it was basically a chance to go low.

Justin Rose was the best of ’em.  J-Ro wielded his putter like the legendary sword Excalibur.  He stood over a 12-footer for birdie at the scoring-friendly 18th and with Tiger Woods looking on, drained it the way he basically drained everything on a day where he did what Woods did 19 years ago.  Rosie made that final putt for 65 and knew what it meant.

“I did,” Rose said when asked if he knew that putt was for a U.S. Open record-tying first round 65.  “I thought this would be kind of cool to do it in front of the great man himself,” Rose said of his playing partner, Woods.

Rose walked off the 18th with the solo lead at six-under and he drew comparisons between Pebble Beach and Merion, where he won his only major back at the 2013 U.S. Open.  “They each have their quirks.  It’s nice to shoot a good one,” Rosie said.  “I fell in love with Merion and I love Pebble.”

That’s not surprising.  You’d figure anyone who had a mind-boggling 22 putts for the round would love the place.

But there was a lot of love to be had on day one.

There were four guys lined up right behind Rose, including golf’s Cool Kid — Rickie Fowler.  Rickie may have had the most stress-free round of anyone on the golf course.  He hit 13 of 14 fairways and 15 of Pebble’s 18 greens.  “I feel like I’m swinging well throughout the bag.  If you don’t drive it in the fairway, you’re playing catch-up.  I hit a lot of really good putts today.  To be honest, I felt that was about as bad as I could have shot,” Rickie declared, his hair hanging out the back of his cap — millennial mullet style.

If you want to talk about luck, just consider how Xander Schauffele got himself into that group at 66.

The X-man tugged his drive at the 18th and it bounced off the man-made rocks, back into the fairway, putting him out there past the 320 mark.  He then stuffed his second to 10 feet and made it for eagle.  Good finish, lucky finish.

At the par four 11th, former Open champion Louie “Shrek” Oosthuizen had just 96-yards for his second.  He planted it 12 feet past the hole and drew the shot back into the cup for eagle two.  Shots backing up at a U.S. Open?  No one’s complaining about these greens.

Youngster Aaron Wise did just about everything right.  The kid made four back nine birdies to insert himself as one of the surprise guys at the top.

The front nine was virtually offering birdies for free.  Amateur Viktor Hovland, who will turn pro next week, birdied four of those first six and by day’s end finished birdie-birdie to tie big bad Brooks Koepka with a two-under par 69.  Koepka looked like Tiger Woods in 2000 early in his round.  He was four-under through his first six holes but staggered in the rest of the way, going two-over for the final 12 and looked pretty human for a change.

By evening, there were a whopping 39 players in red numbers and another 18 at even par 71.

Phil Mickelson was not one of them.  Lefty looked every bit of his almost 49 years (he turns 49 on Sunday).  He hit an assortment of wild drives, missed an assortment of makeable putts, including one from 14 inches at the third.

Life wasn’t a box of chocolates for Lefty.  He knew what he was getting and it was a 72 on a day when par appeared to be 69.

Good news is that Pebble is both easy and hard.

Score early on the front nine then hang on for dear life on the back.

Should make for fun the next three days.

Oh yes, Justin Rose loved Merion.  And yes, he did say something about loving Pebble.