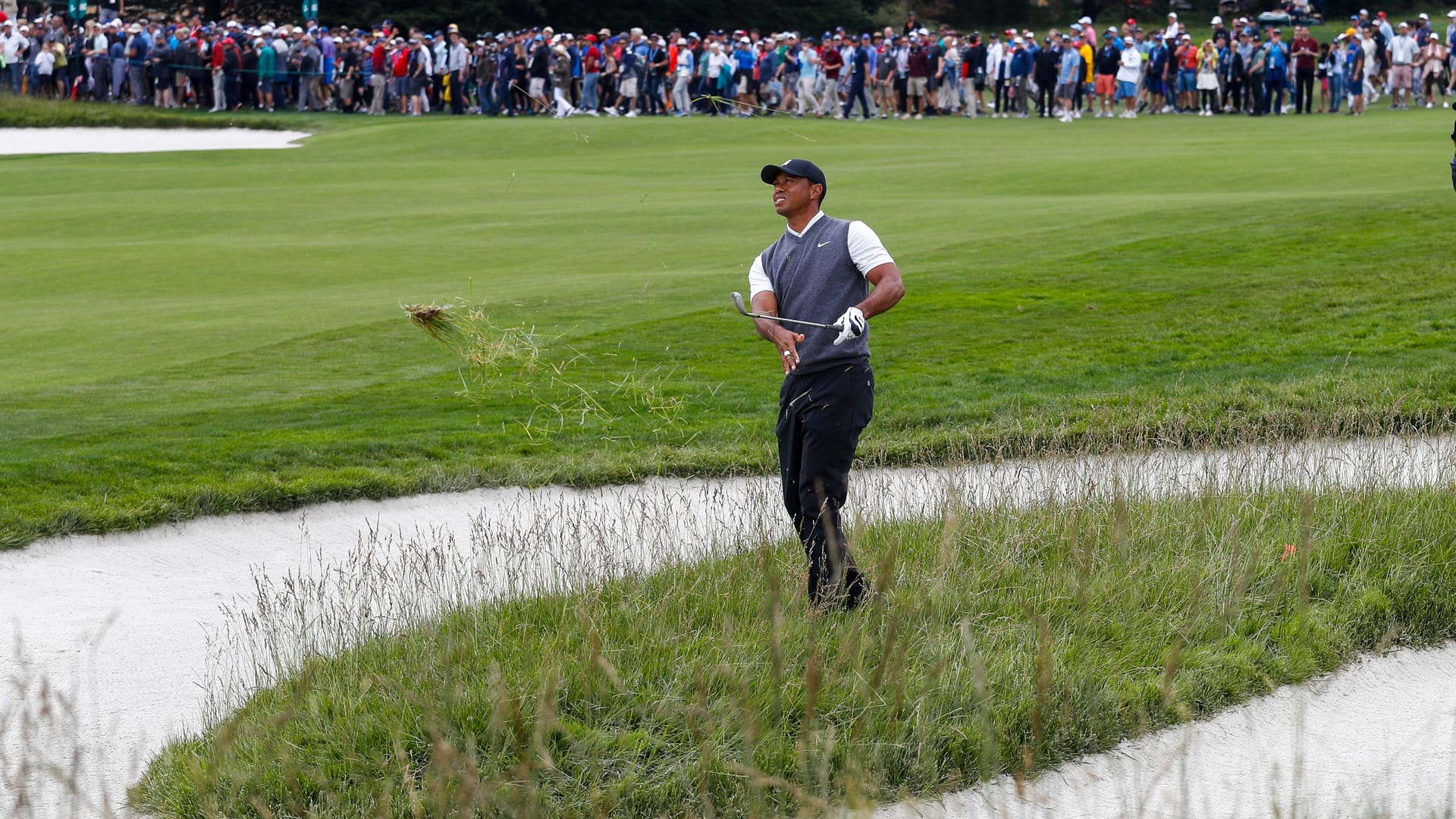 An errant drive at the second had Tiger Woods scrambling for par. -- Photo courtesy of JD Cuban, USGA.

Tiger Woods had a hard day at the office on Thursday.

“It was a grind,” was how Woods described his first round at the 119th U.S. Open, a round that produced a one-under par 70, a long way from the 65 he threw at the field 19 years ago at Pebble Beach when he basically ran away and hid with the championship.

“You have the first seven holes, after that, it’s a fight,” said Woods, who was fighting all day to get himself into red numbers on a day when there were birdies to be had.

It didn’t take long for Woods to find trouble.  His first driver of the day off the second tee found a grass island in the left fairway bunker — thick stuff.  He hacked it out, hit a wedge for his third and made a nice par-saving putt.  It basically set the tone for a day of struggling for Woods.

Tiger’s worst hole of the day came at the par three fifth, where he hooked his tee shot badly, caught a cart path, ended up in some deep stuff then hit his second into the right greenside bunker.  He blasted to 10 feet and missed his bogey putt from 10 feet.

“A terrible tee shot,” was how Tiger described it. “I was in between clubs. I wasn’t committed to hit a 6-iron. I know from playing the practice rounds that I probably should hit 7 because I can hit it 15 yards short of the green, and there’s a little shelf there that will funnel the ball onto the front part of the green. And I hit a terrible shot, but the second shot was good. But the mistake was the third shot, and I hit it above the hole. And a simple little pitch shot, if I leave it ten feet below the hole, easy shot, move on with the bogey.”

Woods didn’t go low enough over those first seven holes.  He battled back after the double with a pair of birdies, made the turn one-under then scrapped his way to nine straight back nine pars and barely made it to red numbers with that 70.

He finished late and wasn’t heading for the range.  “I’m done for the day,” Woods said.

One Friday, he’ll start off the 10th and face a tough stretch to begin his day.  “Well, it’s a quick turnaround into tomorrow (Friday),” he pointed out. “Off of 10, right away we’ve got a tough par four right from the get-go. And we have the harder side to start off on, and hopefully I can finish up on the front side and have the full seven holes where I can get it going.”